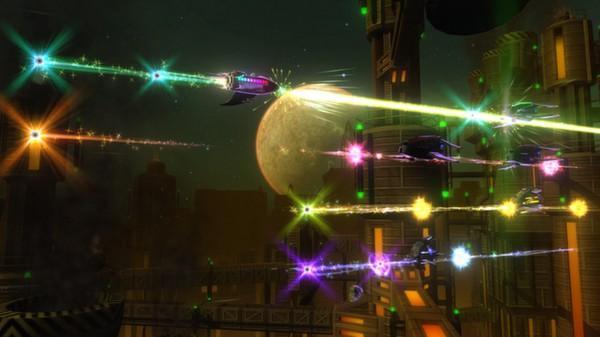 It turns out that when you reverse a side-scrolling space shooter, you get a Guitar Hero-like rhythm game instead. If you based your purchase of Retro/Grade on the screenshots alone then you might well be initially disappointed, then rather curious, and soon after, rapidly satisfied.

That’s because Retro/Grade is very different to anything you’ve ever played. Moving in reverse, you dodge bullets coming from behind and suck lasers back into your ship as they approach. Anyone with a fondness for rhythm games will definitely want to pick this one up.

You start the game by finishing it. As the last boss goes down and the credits begin to roll, the space-time continuum rips apart, and everything is thrown into reverse.

Suddenly, instead of shooting down enemies and laying into huge boss cruisers, you’re desperately darting around the screen collecting up the bullets that you previously fired, and making sure that enemy fire sails past you and back into their cannons.

See, the problem is that if you don’t do everything perfectly in reverse, then you’ll cause a paradox and the space-time continuum will be ripped to shreds. This is the basis of Retro/Grade – but cleverly, rather than having you rushing about and guessing where the next bullet will appear, it’s all set to a beat, and you’re asked to collect and dodge in time with the music.

This concept spreads wonderfully throughout the entire package. Your score, for example, goes down when you play rather than up, and the online leaderboards list “low scores” at the top rather than high scores. Just as brilliant is how, when you complete a level, it then plays back in reverse (i.e. the correct way) in the background while you look at your stats.

The action itself involves switching between lanes such that you’re in the correct position to receive a laser (or dodge an enemy laser), and then single-tapping, multi-tapping or tap-and-holding to draw the fire back into your ship. As you do so, your multiplier builds up, and you’re afforded the chance to activate a score-boosting mode which can grant you serious points.

It’s the variety that really keeps Retro/Grade feeling fresh. You’ll be “attacked” by simple laser shots, bullet-hell spreads, lasers that fill whole rows and more – which you yourself will have to learn to deal with each type of shot your own ship can make. As you play you’ll unlock special rewards and ships which really make you want to keep coming back for more.

But it’s the presentation that really does a number on me. Gorgeous backdrops pulse with light to the beat, and there’s so much color on display. Just because it’s set in space doesn’t mean that Retro/Grade can’t show you the rainbow over and over again.

With all this color flashing by, there is a small issue – sometimes it’s incredibly tricky to see where lasers are coming from if they’re all overlapping. This happens a lot on the harder difficulties, and means you have to start memorizing layouts a bit, rather than relying so much on your eyes. 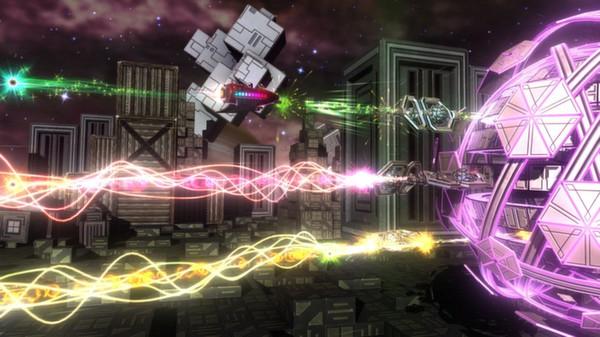 This isn’t Retro/Grade‘s only issue – there’s the problem of difficulty-locking too. The Challenge mode is the best part of the game, asking you to complete various quests with different outcomes. But you’re focused to start playing very easy levels, and it ramps up extremely slowly.

What this means is that if you’ve started with the main Campaign mode (as you no doubt will), you’ll already be very good at the game, and thus the Challenge mode will feel far too easy and boring, only really getting going an hour or so into it. There are warps you can potentially skip through, but it still would have been nice if the entire mode was based on you picking a skill level throughout, rather than on the difficulty level ramping up.

Despite this minor complaint, Retro/Grade is a wonderful rhythm game, riding waves of innovation that will keep you entertained for hours. Those online leaderboards will no doubt keep us coming back for more for weeks to come.