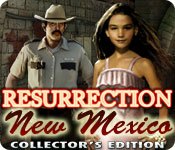 Can you escape the town of Resurrection alive?

Welcome to Resurrection, New Mexico, a town that is somewhere between life and death. You play Amy Walters, a journalist who finds herself trapped in Resurrection after she’s in a terrible accident on the way to her daughter’s dance recital. You must help Amy find a way to escape Resurrection before she is trapped there forever.

Along the way you will meet the other residents of Resurrection and help them find peace so that they can leave. You are also being stalked by the cruel sheriff who is trying to keep everyone there. You will also be looking for a terrified young girl who is hiding from the sheriff as well. She just may be the key to returning home.

The town of Resurrection doesn’t make a lot of sense. There is a giant snake/dragon that is slithering around the town. Is it working with the sheriff or vice versa? Also, apparently even in limbo cell phones still work. You may not be able to reach anyone but you’ll still be able to receive email. As you explore the town, ominous messages will appear, some warning you to stay put and others that seem to be warning you to escape. Strangely, these occurrences don’t seem to phase Amy much. However, this could be the result of there being no voice acting in the game.

Resurrection, New Mexico is fairly standard as far as hidden object/adventure games go these days. You will be solving puzzles, collecting inventory items and searching through hidden object scenes to progress through the game. You are confined to the town of Resurrection, but there are plenty of locations to visit within it.

The backgrounds in the game are highly detailed and well done. The items in the hidden object scenes make sense to their surroundings. Unfortunately, much of the game is dark and dreary and everything seems to be tinted brown. This causes a lot of the items in the scenes to blend in a little too well, especially if the items are small or skinny.

The majority of the puzzles are inventory based but there are also standard puzzles scattered throughout. The puzzles are familiar but some of them do have unique spins. For the most part the puzzles are fairly easy, although there was one guessing game that ended up being frustrating simply because it was trial and error versus actual puzzle-solving.

As stated previously, there is no voice acting in this game. Considering the number of characters you interact with and the amount of dialogue in the game it would have been a nice addition. The music in the game fits the scenes and is pleasant to listen to.

The collector’s edition has a bonus chapter that is a prequel to the main storyline. You play as a different character trapped in the town and answers a couple unanswered questions. There are a couple puzzles in the bonus content but for the most part it’s all hidden object scenes. The bonus chapter will likely take less than an hour to complete.

Resurrection, New Mexico is a solid game with an interesting plot. It’s not too hard but it’s not overly easy either. I would recommend giving the demo a try to see if it’s right for you.