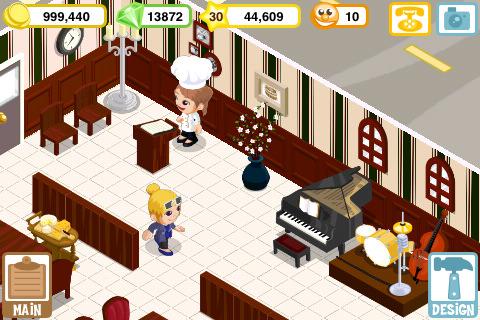 Restaurant Story offers a tasty restaurant experience on the go

Restaurant games on Facebook have been a blast over the past year, but like any good foodie knows, sometimes you just need a quick meal on the go. For their third release, TeamLava has decided to serve up a tasty dish that any self-respecting iPhone owner would be happy to snack on throughout the day.

Taking its influence from popular Facebook games like Restaurant City and Café World, Restaurant Story places players in the role of a fledgling restaurateur. You’ll set up seating, prepare meals, and do the best you can to make sure there’s always enough food available to meet demand.

It’s a fairly simple formula, but it’s also one that’s charmingly addictive. Cooking is an act that parallels the common “wait and return” aspect of other social genres, such as waiting for crops in FarmVille or waiting for manufacturing in City Story, but with a few extra steps thrown in for good measure. After selecting a recipe, players will tap on each ingredient to start the cooking process, and then tap again when the food is ready to add final preparations.

Once served, the food will be placed on a serving table, offering a buffet style atmosphere to your five-star dining experience. Customers will enter the restaurant, help themselves to a meal, and pull up an open seat. As they eat, the number of available servings for the food they’ve chosen will go down – which means you’ll need to stay in the kitchen and make sure there’s always something on the stove to replace the current meal.

It sounds easy, but there’s a catch-22 here that’s pretty much unavoidable. The happier your customers are, the more people come in. The more people come in, the more quickly you run out of seating. Once there are no seats, angry customers start to storm out and your popularity begins to drop. Like running a real restaurant, being the hottest spot in town is something of a double-edged sword.

TeamLava’s offerings have never really disappointed in terms of presentation, and Restaurant Story is no exception. Visually, this might be their most polished game to date. This is the first time we’ve seen human characters in one of their games, and they’re both well-crafted and brimming with personality. The dishes you’ll prepare, too, look downright exquisite. Every step of the meal even offer up a different appearance, with the preparation, cooking, final touches, and served product versions all sporting a unique look. It’s just a shame there weren’t more food options to choose from. 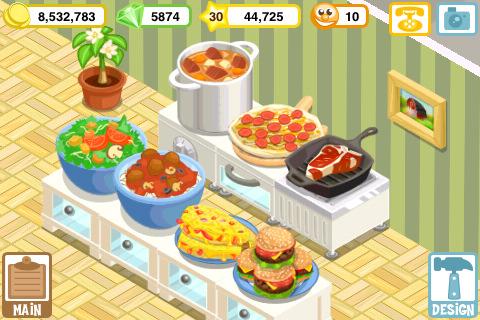 As is often the case with social games at launch, the selection of preparable items and decorations is paltry at best. Still – considering we’re reviewing this in their first week, it’s hard to ding them for this. What it isn’t hard to ding them for, though, is some confusing messages indicating content that should exist, but doesn’t. When we reached level 7, for example, we were presented a message that said we had unlocked a recipe for bagels. Then when we went to make them, no such recipe existed.

We were also a little disappointed to see that the majority of cool restaurant decorations required the use of gems – their version of currency that must be bought with real world money – rather than the in-game currency of coins. Locking away a handful of cool items for those who are willing to spend real world cash is a totally understandable business practice, but Restaurant Story goes embarrassingly overboard in this respect. More than half of the items on the decorations page in the shop require a gem purchase. If you want anything cooler than a potted plant or a divider, you’d better be ready to bust out the Amex.

The game also suffers from the same social flaws as TeamLava’s previous efforts. Using the Storm8 network rather than a more established service like Plus+ means that you’ll need to sign up for a new login for each game, forgoing the ability to keep your friends list from earlier games in the series. Similarly, TeamLava’s games still lack the ability to sync your game across devices, forcing you to start two entirely different restaurants if you want to play on both your iPhone and iPad.

There’s no question that Restaurant Story is easily TeamLava’s most impressive project to date – but that doesn’t mean there aren’t a few hiccups and flaws along the way. Thankfully most of these hiccups are easy to overlook, as the core gameplay here is just as enjoyable as what you’d find in its Facebook inspiration. Treat this one like you would any meal in a restaurant. The waiter may not have taken your order exactly right, but the food is delicious regardless.