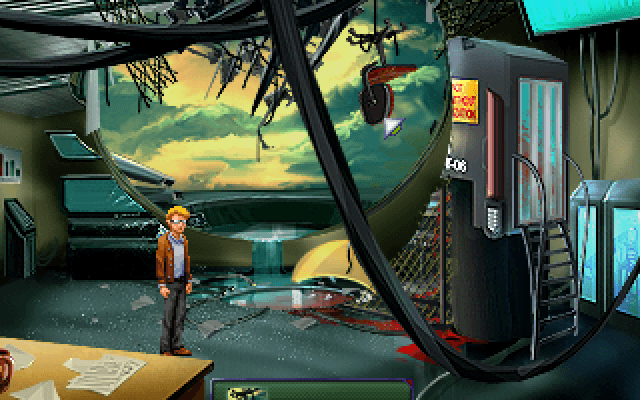 What to make of Resonance? It’s a competent old-school adventure that deserves credit for trying something different, but it stumbles over that boldness as much as it succeeds. The slow-boiling mystery ultimately makes it a worthwhile investment, but I can’t help thinking that it’s held back from true greatness by the very system that makes it so unique.

That system, in case you’re not aware, is the four-character design around which Resonance is built. Not four players – this is strictly a solo affair – but four characters: Ed, a scientist, Anna, a doctor, Bennett, a cop, and Ray, a reporter. They come together in the wake of a bizarre and terrible accident at a laboratory in Aventine City that claimed the life of a brilliant scientist who’d been working on the most revolutionary source of energy ever discovered, something he’d dubbed the Resonance Effect. But like all the best energy sources, this one has the potential to be almost limitlessly destructive in the wrong hands, and of course the wrong hands are after it. But who are they? What will they do with this knowledge once they have it? And above all else, what will you do to stop them?

Much of the gameplay in Resonance is built around teamwork, forcing players to combine the talents of the four characters to get things done. In the early going, Ed and Bennett come together in a classic “brains and brawn” combo as they work to rescue the horrifically injured Dr. Morales from his lab. It’s an interesting idea, and absolutely necessary to the plot, but the system for managing the characters and their interactions feels cumbersome. Characters can only be switched through a pop-up menu, for instance, and since there’s no shared inventory, items must be manually swapped between them if the wrong person happens to be holding it. It’s nothing overly onerous, but given that cooperation between characters is a central component of the game, it’s unfortunate that the mechanics of handling them weren’t made a little smoother. 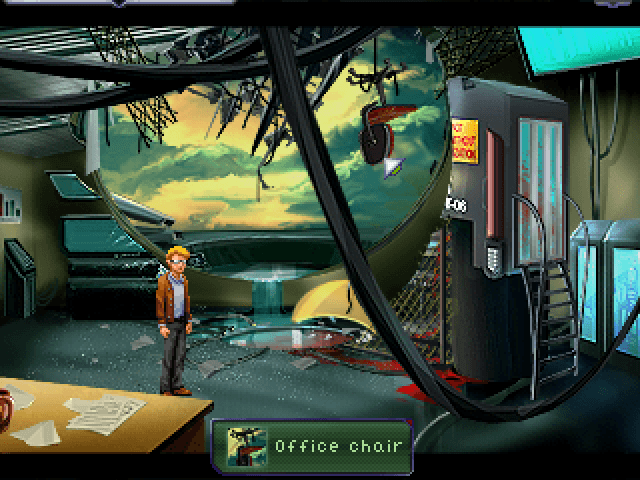 The conversation system is also unique and yet comparably flawed. Each character has both long-term and short-term memories, which function like inventories for experiences and things that have been seen over the course of the game. Long-term memories are automatic and permanent, while short-term memories must be added by the player and are unique to particular locations. Both are sometimes vital to conversations with NPCs, as you’ll often need to ask characters in the game about specific items in the game, but those items aren’t actually available for discussion until you’ve added them to your short-term memory.

In one instance, Ray must talk to a woman named Emma about a mainframe computer, but until he drags-and-drops the mainframe to his short-term memory “inventory,” there’s simply no option to do so. Ray is there specifically to talk to Emma about the computer, and he must do so before anything else can happen, so why force players to essentially construct their own conversation trees? It would be more interesting if the game offered multiple approaches to conversations – maybe you could achieve the same results from a different direction by asking Emma about the drawer, or her date the night before – but it doesn’t, which leaves the whole thing feeling rather gimmicky. 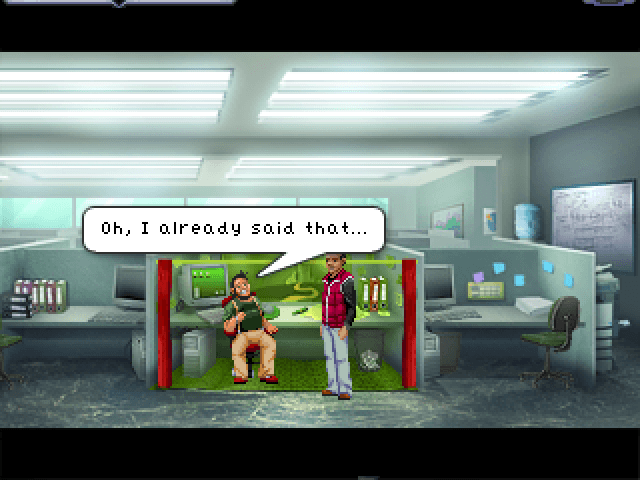 Resonance sports old-school, pixellated graphics straight out of the early 90s, but it’s far from ugly. Quite the opposite, in fact; I’m no throwback, pining for the old days of VGA, but there’s no denyingthat impressive things can be done at low resolution, and if the visuals aren’t quite as striking as certain other recent Wadjet Eye adventures – okay, okay, we all know I’m talking about Gemini Rue – that’s purely the fault of the more Earthbound subject matter.

The soundtrack makes just as good an impression – some of it I’d love to be able to listen to solely on its own merit – but the voice acting isn’t entirely convincing, particularly during moments when these normal, everyday people are faced with life-changing, “end of the world as we know it” situations. That failure to convey any real sense of urgency ultimately lets down the entire game, as moments that are meant to be shot through with tension instead come across with little more weight than a decision to split up at the mall and meet back at the food court in an hour.

It’s definitely not for kids; there’s violence, bloodshed – some of it surprisingly graphic – and more than three f-bombs dropped. It’s also not for those without patience, as progress will occasionally be impeded by dense, some might say tedious, conundrums that were a staple of those old-school adventures that were designed primarily to make you throw your hands in the air and quit in frustration. 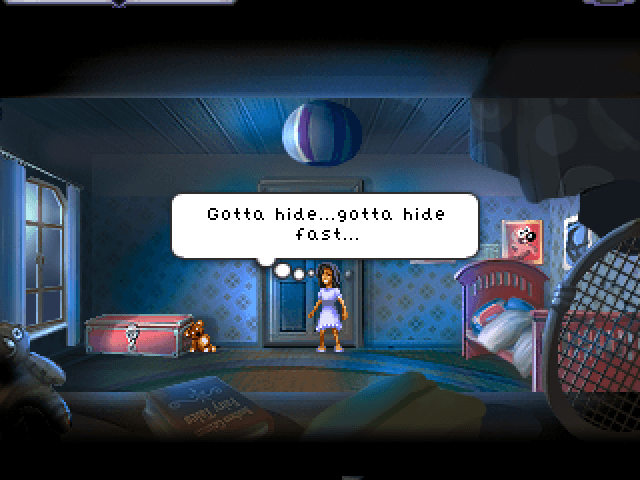 And it’s a slow game – a little too slow, in my estimation – but when the big twist hits, it hits hard and from absolutely out of nowhere. There’s an air of contrivance to it, although I think it’s fair to say that Resonance as a whole is driven by a certain element of unexplained deus ex machina, but it’s such an unexpected and powerful moment that it just works.

That’s also the moment at which the whole thing turns around. Chemistry between the characters, which was previously non-existent, is suddenly there, as is the intensity that had been so sorely lacking up to that moment. The grand finale isn’t exactly subtle, and actual answers to a great many questions that crop up over the course of the game remain in disappointingly short supply, but players can choose one of two very distinct endings to the game. And to its credit, Resonance auto-saves before the big moment, making it easy and (relatively) painless to experience both.

It’s just a bit too little, a bit too late, to propel the game into greatness, but a strong finish goes a long way and Resonance finishes very strongly indeed. It’s not perfect, and in the end I enjoyed the game more in spite of its unique features rather than because of them, but the bottom line is that I did enjoy it. When the curtain falls, that’s what really matters.