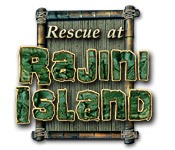 A captain and his crew discover Rajini Island and send their highly qualified explorers to study its ancient ruins, but the crew lost radio contact three months ago, so you get the job of finding the missing explorers in this hidden object game, aptly-named Rescue at Rajini Island.

As you make way around the island, you pick up diary pages. The diary describes the explorers’ findings, which can help you as you work some of the puzzles. However, the clues for most puzzles appear on the scene. (Strangely, the diary’s first two pages are blank. The only way you know you’re on the last page is when you click the arrow to flip the page and nothing happens.)

The scenes’ clues work better than the diary because you don’t have to switch between opening the diary and returning to the scene. The clues also stay open while you solve the puzzle, so you don’t have to write anything down or switch back and forth.

The gameplay mainly involves finding hidden objects in one of three ways: the standard list of items to find, multiples of the same item types – often food or diary pages – and silhouettes. Most items have little to do with the story. On occasion, an item goes into inventory to use elsewhere, or you pick up the item on the scene and use it right away.

The game comes with two modes: Relaxed and Expert. No clock ticks away while in Relaxed mode, and it gives you five hints instead of three given in Expert mode. You have 10 minutes to solve each scene in Expert mode.

The most challenging aspects of Rescue on Rajini Island are comparing two scenes and several of the mini-games. The scene comparison puzzle tricks you by adding an extra branch on a tree, missing a piece of wood in building’s column, and so on. Mini-games rarely repeat themselves, making this one of the better parts about the game. Thank goodness the slider puzzle only appears once as it’s an infuriating game for many people, but you can skip it and any other annoying puzzles if you play in Relaxed mode. Other mini-games include flipping puzzle pieces to put together a scene and moving a marble across all lines once.

The hidden object portion – the bulk of the game – doesn’t challenge much considering the scenes don’t contain many items. You could click on all the items you see and pick up at least half of what’s on your list. Every few scenes contain a puzzle to figure out whether it’s to locate symbols or rotate symbols to unlock something. These challenge of these games range from easy to medium. You can’t use hints on some puzzles in both modes.

Overall, the game feels clunky. Sometimes it fails to provide you with instructions you need. The first time you run into a scene with no instructions, you simply have to move the mouse cursor around the scene until something pops up. It needs more back story while you work the puzzles to help you keep on track and see the value of what you’re doing that contributes to the story.

Scenes don’t change much when you replay the game, so there’s no replayability. The audio and sound effects don’t irritate like many of the games’ audio tend to do after a short while. The game runs short taking about four hours to play, if that.

The game’s story is a simple one, but sometimes it strays from the main storyline of the missing explorer without warning and begins talking about tribes people, which confuses. Rescue at Rajini Island tells the story in hand-drawn images while the scenes where you do your work use a photograph-style. Sometimes the backgrounds look sharp and other times they look clunky, a problem with photograph-style games. The graphics quality is a mixed bag.

Rescue at Rajini Island offers no extras or anything special. Experience hidden object players will have seen it all before. It entertains on a rainy or cold day especially if you go for Relaxed mode. For those ready to try hidden object games, try something else before this one.

Gamezebo tip: If you liked this game, try Adventures of Robinson Crusoe, Mysteryville 2, and Adventures Chronicles: The Search for Lost Treasure.