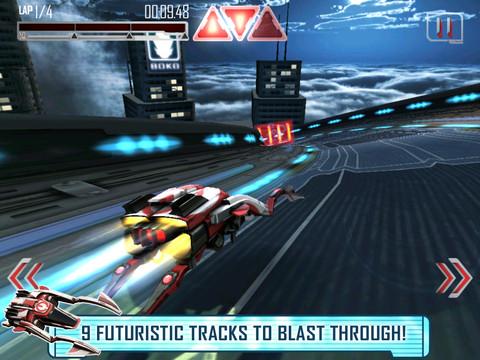 2013 may have only just begun, but in my living room, the science fiction future is already here. Lost in the moment, I speed down the impossibly twisty highway in my hovercraft racer, careening around corners with the finish line in my sights. For a fleeting, but all-important microsecond I lose focus, slamming unforgivingly into a tunnel wall.
This is it. It’s all over…unless…yes! Barely thinking, at one with the machine, I activate an almost-forgotten speed boost, righting my angle just in time to blast through the checkered flag. Satisfied, I look up, at my decidedly unfuturistic analog clock. Is it mid-afternoon already!? I better stop procrastinating. Shutting off my PlayStation Vita and closing WipEout 2048, I look tentatively at my iPhone. I guess I have to talk about Repulze now…
Snark aside, Repulze is very much developer Pixelbite’s (Reckless Racing, Reckless Racing 2) attempt to bottle the thrill of zero-gravity racing for the iOS crowd. Attempt proves to be the key word, as the initially appealing experience quickly sputters out. All the right trappings are there, including angular ships with ubiquitous sci-fi appeal, and gorgeously rendered dystopian motorways. Ultimately, though, not all the lens flare in the world can save the game from some tough truths.
Foremost among them, the fact that Repulze breaks the silent contract of its subgenre: if you’re going to give the player a ton of speed, you must also deliver top-notch controls. Here, both the touch and tilt options prove clunky and lacking in nuance. This is especially true for the tilt controls, which are so bogged down by a sense of friction and resistance that you’re either running into walls because you couldn’t move in time, or running into walls because you moved too far in an attempt to overcompensate. Worse still, the game hardboils precision into its goals system, with each level containing an objective based on getting less than three collissions. The effect is a constant sense of that unique frustration derived from knowing exactly what you have to do, but lacking the tools to do it.

“
On the subject of the game’s goal system, Repulze‘s biggest shortcoming is ultimately its core design. After going to the trouble of creating raceways that float in the soaring martian atmosphere, or which seem carved into the fabric of sprawling, speed-obsessed metropolises, and realizing a wonderful sense of wooshing speed, Pixelbite constrains it all with “three-star” tedium. Collect X boosts of speed. Avoid crashing more than Y times. Devoid of any AI, online competition, or broader progression, each level feels more like a truncated part of a routine endless runner than it does a nail-biting race.
Even the most worthwhile goal – clearing the level in a set amount of time – is castrated by the game’s “polarity” system. Much needed speed boosts are doled out as rewards for collecting three colored energy reserves, which switch between red and green after each successful trio is nabbed. The system turns what should be a vertical game – one based on the constant, hungry push forward – into a jarring horizontal one, based on rushed zig-zagging across the playing field. 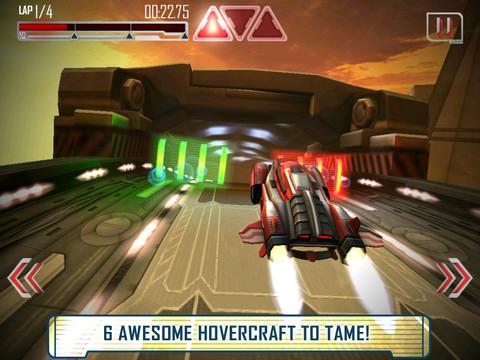 “
Introductory jostles aside, holding Repulze to the exact standards of WipEout or its ilk would be missing the point of its snack-sized packaging. Ultimately, games like this should serve as complements to their genre forerunners. With so many bumps along the way, however, Repulze fails to earn appreciation for what it is – instead serving as a lacklustre reminder of everything it isn’t. The App Store description promises a phased set of updates that will do more with the “Repulze Engine,” however, making this one worth keeping an eye on. In the mean time…where’s my PlayStation Vita?