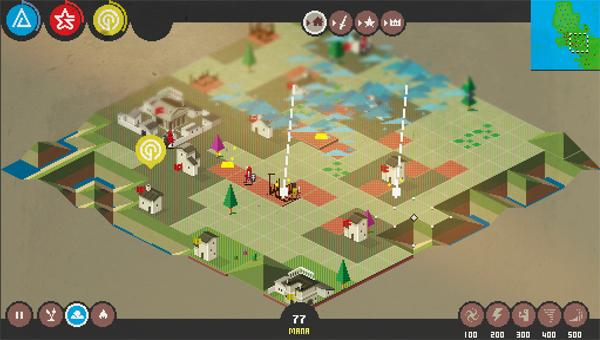 What if God were one of us?

Being a god seems very over-rated. You’ve always got important jobs to do, on which real lives depend, and if you mess up there may well be disastrous consequences. No, I’d much rather sit back with a god simulation game – at least that way I know only pixels were harmed in the making of my godlike incompetence.

Reprisal is a Populous-inspired world-shifter, as you forge paths in the land such that your tribe can conquer others and claim said land in your name. It’s stylish and enjoyable, although the action does become a little by-the-numbers later on, and there’s a distinct lack of multiplayer.

You play a god with a ridiculous number of powers, who is torn apart when multiple tribes begin to take over the land. With what is left of your people, you must fight back, take your homeland and restore yourself to your former glory via scattered totems.

Your people will automatically build settlements, houses and castles as time progresses, so your jobs are as follows: create more space for them to build, and create a path such that they can reach the enemy camps and destroy them. (Think of it like From Dust, but violent.)

You do this via terraforming – clicking the land will allow you to either raise it up out of the ground, or flatten it down. What’s really interesting is that the size of the open space you provide your men with determines how large your individual settlements will be and, in turn, how powerful your devotees are. In other words, a messy settlement is a dead settlement.

There are special powers you can use over time to keep the enemy at bay, such as fire towers, lightning strikes and swamps, although these all cost mana points. Coupled with the terraforming, Reprisal is a very easy-to-understand, very accessible game.

It also has a lovely art style with a chiptune soundtrack to boot. It’s as though the general feel of the game has been inspired by Superbrothers: Sword & Sworcery EP, from the character models down to the slick menu system. 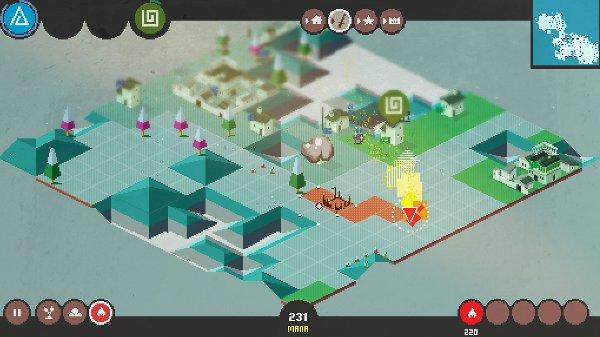 Reprisal begins to trail off towards the end, however, due to conflicting factors. First off, the action is very “samey” throughout, and after a couple of hours you most likely won’t be bothered about continuing. I’d love to have seen more creative uses for your mana, or a dynamic that had you terraforming for more complex purposes.

You’ll no doubt also be put off by the AI as well, which becomes far too quick at terraforming for its own good. Unfortunately, the terraforming tool can be tricky to aim and use at times, meaning you’ll be raising and flattening certain areas over and over to get it right, giving away valuable time and inevitably building towards your doom against the automagically ideal moves of the enemy.

And for goodness sake, where is the multiplayer!? Given that the action is set out perfectly for up to four player god-to-god combat, it’s very odd that there is no such mode. I’d hope that in the very least this is going to be added at a later date, as it would be the perfect way to get me coming back for more. 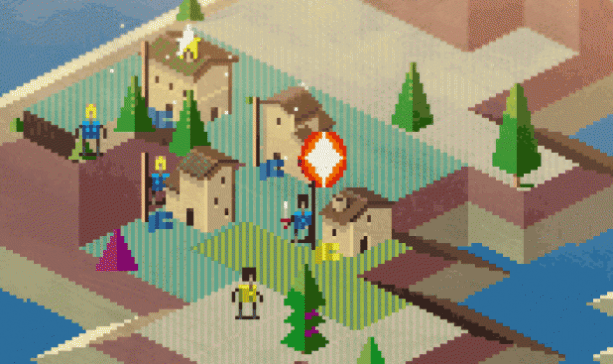 Despite its less than divine peccadilloes, Reprisal definitely brings back the spirit of Populous in a big way, and keeps it just simple enough that anyone can have a go. Play it for free now in your web browser and rise to the challenge… see what I did there?