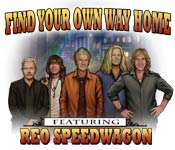 Let’s be honest about something: Most "advergames" are pretty terrible, because they’re more concerned with shilling their product than they are with entertaining the player. Find Your Own Way Home, therefore, is a wonderful surprise. It may be an advertisement for the new REO Speedwagon album of the same name, but it’s also a surprisingly well-done and fun game in its own right.

You play as a reporter who’s thrilled to have landed the gig to cover REO’s concert and album, but it’s not long before things start going awry. The band is receiving strange messages, your rival, Biff, is trying to sabotage your efforts – even your cat is causing havoc. You’ll have to tackle challenges both large and small if you want to get your story done – which means it’s time to start looking for stuff!

Find Your Own Way Home is a hidden object game, meaning you’ll spend most of your time searching cluttered scenes for items on a list, Where’s Waldo style. The searches are fairly straightforward. but the game does throw in a bit of variety to keep them from feeling stale. In some instances, you’ll have to find everything in a specific order, while in others you’ll be searching in the dark with the help of a flashlight. In my favorite twist, some words in the list are blurred, others reversed, and will stay that way until you find an item to solve the problem (such as a mirror or binoculars).

The hidden object levels are well thought out and nicely drawn, but can be frustrating at times, due to the diminutive size of many of the objects on your list. Keeping their scale true to life helps maintain a feeling of realism, but trying to spot drum sticks (the wooden kind, not chicken) can be a real chore. A variety of power-ups – including a compass, and flat-out hints – make your task somewhat less daunting, but even they are problematic. The rechargeable hints reveal an object’s location for just a fraction of a second; you may find yourself using multiple hints to find the same item. You do have other tools at your disposal, such as a compass that points you toward your goal, but there’s no real incentive to use them other than being too impatient to wait for the hint meter to refill.

As is becoming fairly standard for HOGs, puzzles and minigames appear frequently throughout, but Find Your Own Way Home puts a creative spin on traditional fare like jigsaw assembly. Rather than repairing the usual torn note or shredded photo, you have to place video stills in the correct order, or properly reassemble vocal tracks. The mechanic is basically the same – put this bit of image where it’s supposed to go – but by changing the context, it feels entirely new.

Not all of the mini-games are reinvented (for example, you’ll be spotting the differences between scenes quite frequently), but the variety is still quite impressive. Some players might find the games that require quick mouse skills, such as one that has you popping bubbles to fill sound meters, to be more frustrating than fun, but there’s no penalty for skipping, so feel free to bypass anything you don’t enjoy.

Well, almost anything. Some of the hidden object levels give you specific tasks to complete, such as making coffee or starting a car. These boil down to locating specific items and placing them where they need to be in order to finish the task at hand. What’s annoying is that hints don’t work for these levels, and you can’t skip them. Given that you only have a handful of objects to find, it makes a certain amount of sense to turn the hints off, but the items you need to find are often small and hard to find. The result is incredibly uneven: either you’re done in just a few seconds because you only have three or four things to find, or you’re tearing your hair out because you can’t spot the one thing you need.

REO fans may be a bit disappointed by the relative lack of music in the game. If you were hoping to be finding items to classic tracks, you’re going to be sorely disappointed. Though the title track for the new album is featured in bits and pieces (and proves that lead singer Kevin Cronin still has some serious pipes), for the most part you’re playing to a generic rock soundtrack. Though there are photos of the band, most of the interaction is via text message or chat bubbles – it’s rather a lot like reading a comic book starring the band.

Overall, Find Your Own Way Home‘s pros outweigh its cons. It’s long, has a nice variety of game styles, including some creative twists on familiar mini-games. Despite being an advertisement for REO Speedwagon, it’s not obnoxious about getting you to buy the CD or even watch a video. If you like REO Speedwagon, great, but if not, you can ignore that aspect of the game pretty easily.