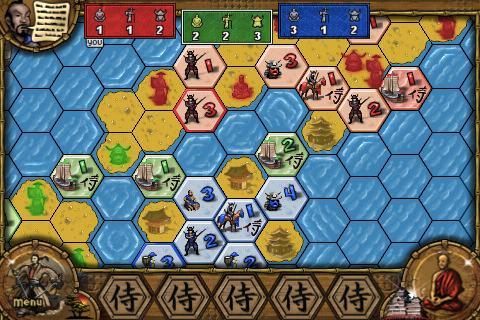 In the board game world, there are a few big names when it comes to designers, but nowhere near as many as of the big names behind movies or video games. Of the few that do stand out, one could argue Reiner Knizia stands above them all. His name has graced the covers of many classic board games, and as time goes on more and more of his games have come to the App Store like High Society. Next up on that list is the classic strategy game Samurai.

Samurai is a tile based game where the point isn’t to attack or take over other units, but to influence them enough to capture them and score. The theory has been seen before in simplified form in Everlands, where you place tiles adjacent to the ones you’re trying to take over. The idea is the same in Samurai, just deeper in execution.

The game is played on a hex map of Japan, with some tiles containing icons representing religious, peasant and warrior castes which it’ll be your job to acquire. Likewise in your hand you’ll have tiles containing those figures as well as Samurai, ships and Ronin. The tiles you need to place down to exert influence need to match the tile you’re trying to capture. So to influence the religious tile, you need to place a Buddha one next to it. The Samurai, ship and Ronin tiles exert influence on all types. In addition to the icon your tiles also have numbers representing their strength. To successfully capture a tile you need to have the most influence over it once it’s completely surrounded.

This is where the main crux of the game takes place. Players vie for influence, and try to out-influence each other while surrounding tiles. There’s a risk/reward element since if you place a tile down that leaves only one space left before it’s captured, meaning you give your opponent one last shot at stealing it from you by placing a higher number tile. This isn’t always the case mind you, since some tiles let you play multiple tiles per turn, but it’s still a routine element. 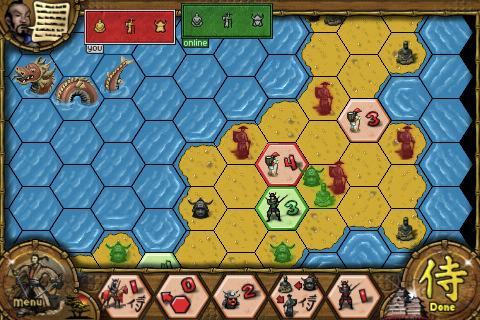 Samurai offers games from 2-4 players and can be filled with either AI opponents, real life people via pass’n’play, or over the net via push notification. The push notification is nice since it’s kind of set up like Words With Friends in that you can have multiple games going at once and it’ll tell you when it’s your turn and in which game. You should never be left wanting when looking to get a game or two in with real competition.

One of the really nice aspects to playing board game digitally is the fact that all the scoring is handled for you, and that’s certainly the case here. There’s more than a few ways the game can end by capturing different combinations of tiles and it’s nice to not have to remember to check for that stuff on your own. Also, it makes it all easier to not have to worry about making any mistakes when adding up the final score.

The game has that deceptive appearance of looking quite easy, which you should avoid believing at all costs. I wasn’t three moves into my first game that I remembered how difficult and deep this game is (having played the board game version back in the day) and it was a both humbling and exciting revelation. Samurai is a game I’m going to be able to play for quite some time.