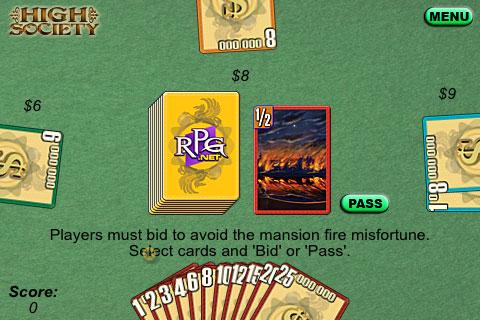 Oh, hello there commoner. I was just sitting here polishing my monocle and didn’t notice a person of such low social standing come into the room. I of course realize you’re a millionaire (otherwise the butler never would’ve let you in the room) but the rest of us are bazillionaires, so I don’t think you can really play our little game of auctioning exquisite and fine luxury items. Oh what a stressful lot in life to maintain the standards of High Society.

Reiner Knizia’s High Society is based on a card game of the same name that’s been out for quite a few years now. It’s an auction game where the players involved use cards in front of them to bid for luxury high-priced items. The items are worth different point values and whoever has the most points at the end of the game wins. Of course there’s a little more to it than that.

The cards in front of you have varying denominations on them, starting with 1 million and going up to 25 million. You’ll use these cards to make your bids, adding to your bid until you either win the item or give up and pass. You only get to use each card once for a win though, so if you use your 1,3,6, and 12 million dollar cards to win with a bid of 22, you lose the cards for the rest of the game. If you don’t win you get your cards back, allowing you to use them in a future bid.

When the game is over and points are tallied, whoever has the least amount of money in their cards remaining is automatically out of the game (those snooty rich folk!), so it’s a delicate balance of bidding to win points but making sure you have some money left when all is said and done.

While the game itself is totally true to the board game, the presentation lacks in a few key areas that definitely left me sour after playing it. The game can handle either 3 or 4 players, but only one can be human. Pass and play (or even better, a network option) would’ve added a lot here, especially given the subject matter. Instead all that’s offered is a single player experience.

Something like an auction mechanic just feels off when dealing with AI opponents. There’s a human element to auctions, where your heart gets ahead of your head and the thrill of outbidding someone else takes over and drives the price up higher than it should be. When you’re playing against the AI there’s none of that, and it just doesn’t feel right.

The graphics are acceptable, but they’re certainly nothing to write home about. They do the job of conveying the information needed, but lack a certain flair or polish we’ve come to expect from iPhone games. And then there’s the sound… or rather, the lack of it. You see, there isn’t any. Not in the title, not in the menu, not in the game. There’s neither music nor sound effects. It’s a card game, so at the absolute minimum I’d expect some card flipping sounds.

If you don’t care about any of those presentation elements, then you should be totally happy with Reiner Knizia’s High Society. For me, however, I just felt like the whole thing was unfinished. Those little touches that take it from being a piece of software to being an engaging experience were just missing. Personally I’m hoping for a patch to bring some of those missing elements to the table.