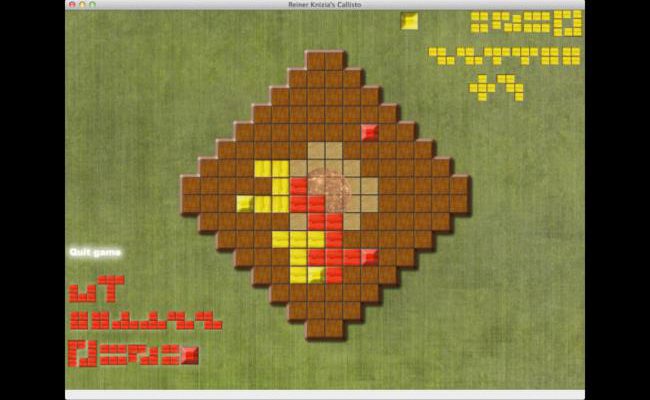 Reiner Knizia’s Callisto proves that more of the man’s games need to come to digital platforms.

If you’ve never heard of Reiner Knizia, you really should take a moment to look him up. Claims that he’s “the world’s most accomplished game inventor” seem pretty reasonable; after all, the man has created over 500 published games (most of which are pretty highly regarded within the board/card game communities). That said, many of these games have yet to be ported to digital platforms. However, based on Reiner Knizia’s Callisto, more of these games deserve such releases.

Callisto is a strategy/puzzle game that pits you against one to three opponents (any mix of human or AI is acceptable). Each player takes turns placing their puzzle pieces around the grid map, based around the one-square pieces they put down at the start of the game. The goal is to have as few pieces as possible left over at the end, and each remaining piece has a point value based on how many grid squares it would take up. 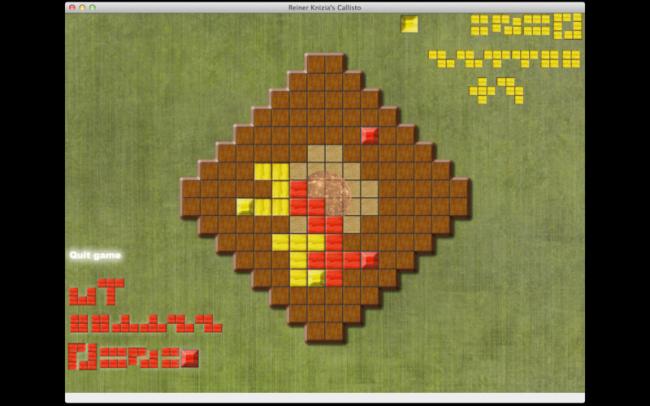 This is one of those titles that’s quick to learn, but takes forever to master. The puzzle pieces are shaped like they’re straight out of Tetris, and since the grids aren’t square shaped. Since your pieces can only be placed adjacent to squares that are already filled with your blocks, you’ll have to be creative if you want to get all of you pieces out while simultaneously heading off your opponents’ options. Needless to say, this is an exceptionally challenging game, but it’s a lot of fun.

Now, while the game is a multiplayer title by nature, there’s no online function. If you’re playing with other people, you’ll have to adopt the “pass and play” method, which is a bit of a pain when you’re using a computer.

Also, there currently seems to be a bug in the software: If Callisto is in its full-screen mode and you try to quit, the window asking if you really want to exit the game won’t show up until you get out of the full-screen mode. 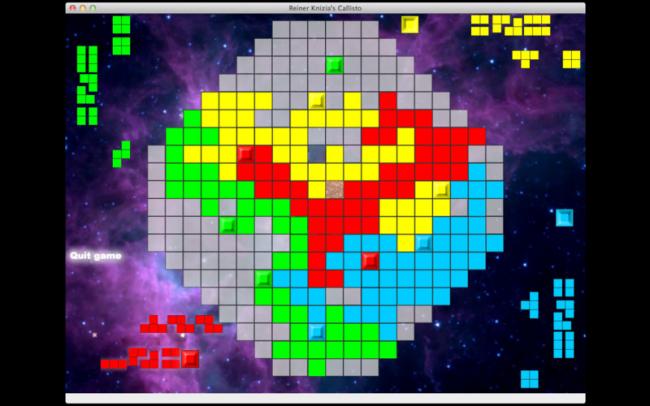 If you’re a graphics snob, this is probably not going to be a game that you’ll enjoy. Its visuals are incredibly simple, featuring simple grid maps over abstract starry backgrounds, multicolored blocks in Tetris-like shapes, and not much else. That said, this isn’t really one of those titles that needs to look amazing, since all its appeal lies within its gameplay.

Reiner Knizia’s Callisto isn’t going to blow you away with deep gameplay or stunning production values. What it does, though, is provide you with a quick, fun board game experience on your computer that will provide a challenge even if you’re the only person playing. If an online multiplayer mode is eventually added in, this could easily be a great title. As it is, it’s still pretty good right now, and its puzzle/strategy gameplay is definitely worth checking out.