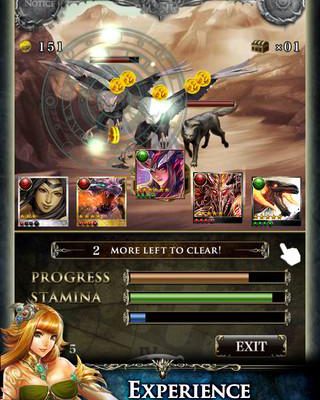 Reign of Dragons has all the trappings of a fantastic and engrossing iOS collectible card game: It features some wonderful artwork, a massive pool of cards to gather, enhancement and evolution to make your favorite cards more powerful and to similarly unload the worthless ones. It has quests. It has PvP. It’s practically the next Rage of Bahamut. Which might have something to do with the fact that it is Rage of Bahamut.

The world is in peril and the only way to save it is to get a whole bunch of iOS gamers competing to become the next Dragon King. The majority of the early game involves questing, which is where players will earn most of their cash, cards, and experience. Each quest consists of a backdrop with a number of enemies that will pop up at random, and clearing them is simply a matter of tapping the screen. Each “attack” uses up stamina, and once a player’s stamina is empty they’ll have to wait a bit for it to refill. Of course there’s also the possibility that they’ll complete the quest, thus opening up a new one or reaching a boss, or level up and get all their energy refilled. The other half of Reign of Dragons consists of direct combat with other players in which attack and defense decks are set up, and to the victor goes the spoils. Specifically, treasures that will bestow special gifts once a set is completed. 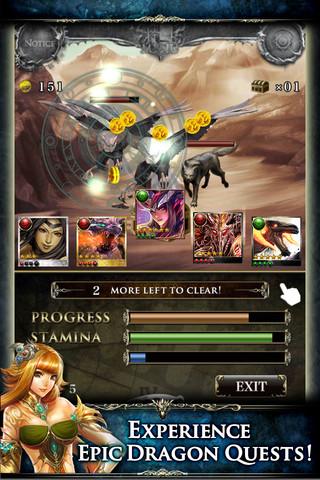 All of the questing and battling in Reign of Dragons serves the cards. Rare and powerful cards can be assimilated into a deck for improved defenses or attack strength. Doubles can be combined in order to evolve a card into a much stronger form. Even undesirables can be sacrificed to enhance more worthwhile cards, increasing their level and boosting their stats. The cycle of collection, enhancement, and trading can quickly become compulsive.

What trips me up about Reign of Dragons, despite the fancy additions like music, animations, and so on, is the absolutely blatant copying of a game that’s been out for a while now and has a fairly expansive player base. With only a few exceptions – such as different artwork, audio and visual effects, and layout – it’s like playing Rage of Bahamut with a new skin. I mean it’s exactly like it. The cards are divided into three colored categories (red, green, blue), and each card uses a colored border and a number of stars in the bottom left corner to denote rarity and gems. Furthermore, slots for gems on the bottom right of the card indicate how many evolutions a card can have as well as how far along it is, etc. And that’s just a 1-to-1 comparison of the cards themselves. The questing methods, PvP combat, treasure collecting, card pack drawing, and even the basic UI all seem like they’ve been lifted. It’s all so similar that I’m not entirely sure if this is legal. 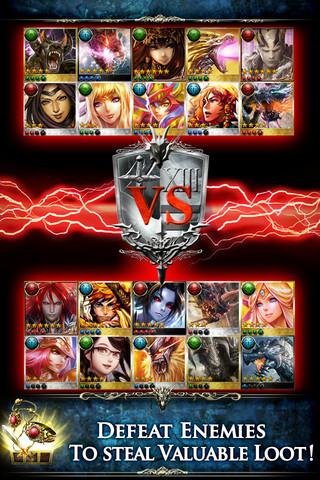 Taken on its own merits, Reign of Dragons is an excellent iOS CCG that’s sure to provide hours upon hours of enjoyment and habit-forming card gathering. The problem is that it’s extremely difficult for anyone who’s dabbled in Mobage’s cash cow not to start a mental comparison. And once that starts it’s difficult not to begin a different sort of “rage.” With this In mind, I’ve scored it based on what it is, and not what I perceive it as, but long-time CCG fans should know that it’s only great because it’s copying another game’s greatness.