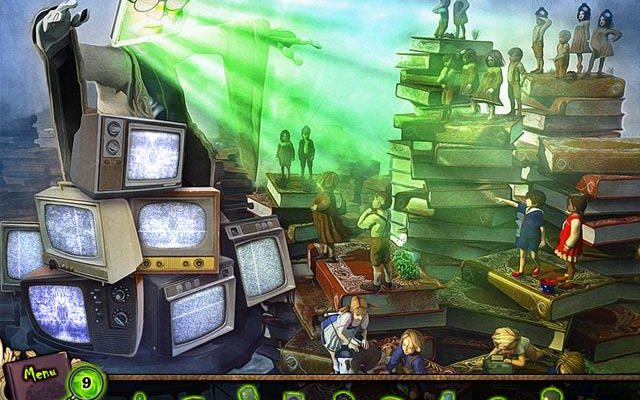 Most hidden object games, even those that deal with the dark subject of murder, tend to do so with a relatively light touch. Players are told more than they’re shown, and they’re rarely told much: Someone has died and it’s up to you to save the day. Not so with Redrum: Time Lies, the follow-up to the 2008 release Redrum. Graphic and disturbing is the name of this game, and you’ll definitely want to make sure the kids are out of the room before you jump in.

Redrum: Time Lies takes a fairly conventional approach to the hidden object genre. Players must free the souls of the ten victims of Dr. Sigmund Fraud, the renowned psychiatrist who was revealed in Redrum to actually be a twisted, evil psycho. A fairly predictable series of steps must be taken to free a soul: Two or three hidden object searches, a jigsaw or “swap the tiles” puzzle and the placement of inventory items in their appropriate locations. It’s a fairly straightforward business and most hidden object veterans should find it relatively simple to work through.

What isn’t conventional is the game’s seriously disturbing content. I can’t think of a single hidden object game I’ve ever played that approaches the sheer gruesomeness of this one. Sigmund Fraud may sound like the name of a typical, cartoonish HOG villain, but take my word for it: he’s not. Dr. Fraud is utterly insane and utterly evil; the things he does to his victims, and the things he makes them do in order to draw them to his “care,” are genuinely appalling. 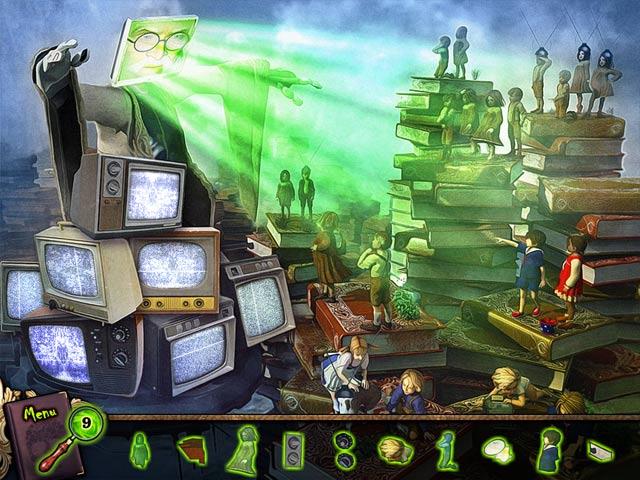 Here’s a sample: “Portrait painter Maurice Medecine has been placed under psychiatric care after a gallery opening in which he destroyed his own paintings. The deranged artist lashed out at horrified patrons, waving a dagger as if painting with a brush, and screaming, “I will make you so beautiful!” After the terrified guests had fled, Medecine slashed his paintings to bits and then assaulted his own publicist, holding the man down and carving his face off with a knife.”

That’s actually one of the tamer newspaper reports that players will find nailed outside of the rooms in Fraud’s crumbling asylum. This is definitely not a game for small children to play, or anyone else with a sensitivity toward unpleasant imagery. It’s not just writing, either. Fraud’s victims are shown in close-up detail, drained of body and soul alike, obscenely emaciated, some partially disemboweled and a few even twitching spastically, as though unnaturally trapped just outside of death’s reach.

Redrum: Time Lies begins with a brief, jarring image of Rose, the little girl who was victimized by Dr. Fraud in the original Redrum. The doctor was eventually caught and committed, but as the game opens he’s been declared cured and set free. This doesn’t sit too well with the burly, lantern-jawed Detective Ravenwood, Rose’s uncle and the hero of the first game, who decides that it’s time to take care of Sigmund Fraud once and for all. But as he arrives at Fraud’s sanitarium on a dark and stormy night, he’s ambushed from behind by an unseen attacker. Dragged inside, he awakens to find himself trapped within Dr. Fraud’s lair, and quickly discovers to his consternation that Rose is there as well. 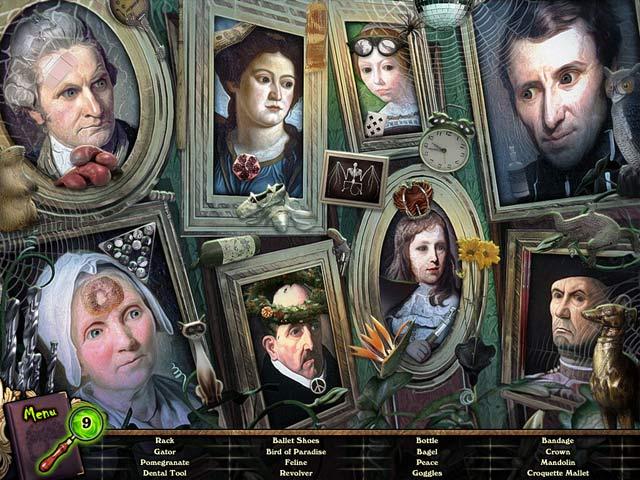 The actual gameplay, as mentioned, is fairly basic stuff. Like its predecessor, Redrum: True Lies can be played in two modes, the free-and-easy Relaxed or Paranoid, which imposes penalties for excessive rapid clicking. The hidden object searches aren’t particularly challenging and while the puzzle mini-games can be skipped after a timer counts down, there’s not much reason to unless you’re in a hurry to get on with things. Hints don’t recharge but are instead limited to a certain number; five hints are available when the game begins and each scene contains a hidden magnifying glass which, if found, adds another. Outside of hidden object scenes, the hint option tells players exactly how to progress, minimizing confusion over what to do next, and a handy map not only helps players find their way around but also allows them to move directly from one room to any other. Fraud’s asylum is a fairly small place but it’s still an incredibly handy feature for a game that requires a lot of back-and-forth between areas.

Graphics and audio in Redrum: Time Lies are excellent. The game’s soundtrack is brooding and spooky, punctuated by the occasional jarring scream, and impaling a gouged-out eyeball on a sharpened steel spike never looked so good. (And if you think I’m kidding, I’m not. You will impale an eyeball on a spike, and it will look pretty awesome.) But the game takes things one step further with some impressive attention to detail. Some jigsaw puzzle pieces are individually animated, while portraits hanging on a wall in a hidden object scene sport creepy little eyeballs that actually follow the cursor around as it moves. The game features a number of small touches like these that go a long way toward making it a memorable experience.

Unfortunately, all that visual jazz comes at a price. I never thought I’d have to say this about a hidden object game but the system requirements are relatively steep; I have a PC on which I regularly play “high end” videogames, yet even I felt it chugging once or twice. Luckily, the visual quality can be adjusted to one of three levels, smoothing things out for people with less-than-cutting-edge equipment. 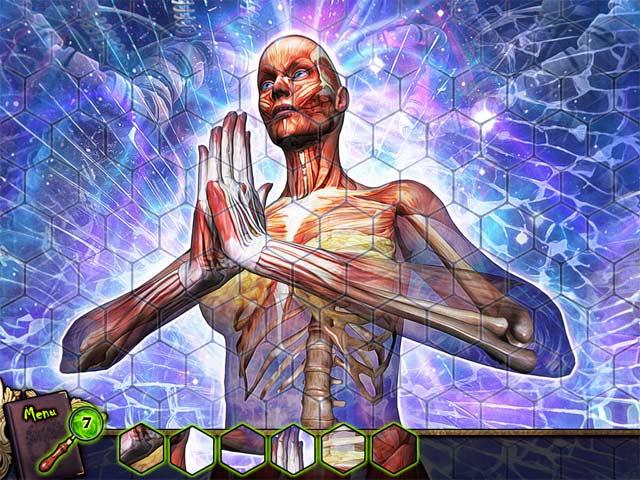 I also found that the game would sometimes greet me with an improperly-sized screen when starting up, offset into the bottom-right corner of the monitor. It appeared random and the only fix I discovered was to end the game using ALT-F4 (the “quit” button was pushed off the screen and therefore inaccessible) and then restart it. It was a relatively minor issue but frustrating when it occurred; hopefully the development team at Anarchy Enterprises will come up with a fix fairly quickly.

The pacing feels a bit uneven, too. Redrum: Time Lies starts off very strong but settles into a routine fairly quickly – a demented and psychotic routine, yes, but routine nonetheless. The shocking first encounter with one of Fraud’s victims, for instance, features a transparent skeletal spirit, seemingly attempting to break free of its barely-alive body, yet nothing like that appears in any future encounters with other victims. The end of the game, meanwhile, requires players to work through three or four rather complex puzzles in a row, turning the hard-earned denouement into an exercise in patience and perseverance. And of course there’s all that creepshow nastiness; I thought it was a great change of pace but obviously it’s not going to be everyone’s cup of tea.

Redrum: Times Lies is “horrible,” and that’s what makes it a whole lot of fun. The gameplay can start to feel repetitive after awhile, but it’s very well put-together and the outstanding production values help keep it feeling fresh. But ultimately, it’s the dark take on the hidden object genre that really makes this game interesting. Most hidden object games are sanitized and safe, so that even those built around murder most foul tend to stay within kid-friendly boundaries, but you’ll find no such protection here. Redrum: True Lies is macabre and grotesque, the sort of game your teenage son would be proud to see you play. In this case, that’s a good thing.