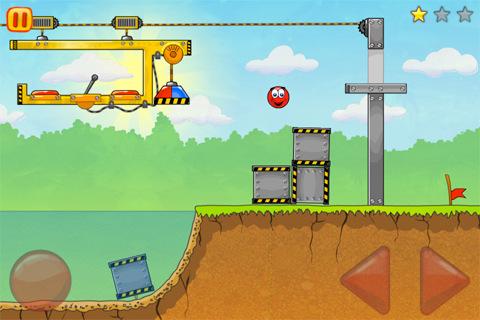 By now, we’ve all likely played our fair share of games that involve little more than “collect 3 stars and finish the level.” This isn’t to say that Red Ball 3 is an awful game, but it is certainly lacking in originality.

The idea behind Red Ball 3 is that you are controlling a red ball that has had his girlfriend (a blue ball) taken away by a rather mean black ball, and its up to you to solve all the puzzles between you and her in order to get her back.

Much like other popular iPhone game Angry Birds and Cut The Rope, Red Ball 3 has several sets of puzzles ready for the picking. As you complete one puzzle, you’ll quickly move on to the next until you’ve completed that set.

Each puzzle is set up with a clear goal at the end of it, and many obstacles between you and that goal. The obstacles could be pools of water, spikes, and in most cases, pits of doom. Luckily, your red ball character can move and jump with ease due to the simple controls that only involve you tapping a left or right button along with a jump. The controls don’t work quite as well as I’d hoped, mainly due to the nature of the non-native d-pad style that is loved by no one.

On top of simply moving past these obstacles to get to the finish, you can also grab up to 3 stars on the way for some extra points. The stars are usually placed in difficult places, so you’ll likely need to get a running start or move a few obstacles around first in order to grab it.

If the gameplay sounds incredibly simple in Red Ball 3, that is because it is, indeed, very simple. Each puzzle plays exactly like the next with only a few different obstacles thrown in here and there. Variety tends to save games like this, but there just isn’t much here.

What does save Red Ball 3 though, is that there is no sense of urgency during the levels. If these levels were timed, the game wouldn’t be as fun. Stars would not be gotten, and levels would have to be tried over and over before reaching the end. 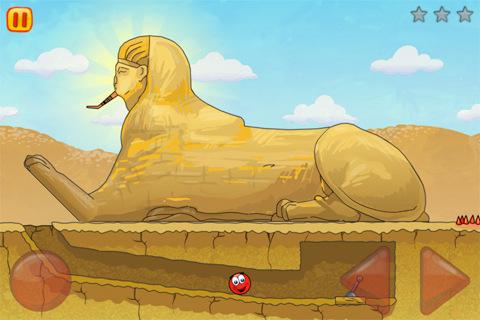 Perhaps another solid suggestion for the developers would be the addition of a level editor and online sharing. With a level editor, you could end up with unlimited amounts of levels, along with the viral publicity that usually follows those types of games.

As it is, Red Ball 3 is somewhat of a tough sell. Without much variety, I found myself becoming bored with it much quicker than I would have liked. Sure, games like Angry Birds don’t offer much variety either, but you do have some sort of satisfaction upon the completion of each level. In Red Ball 3, there is no such satisfaction except for seeing a small red flag reach the ground.

All said, without the needed variety for these types of games, and with less than ideal controls, expect Red Ball 3 simply isn’t worth your time and money.