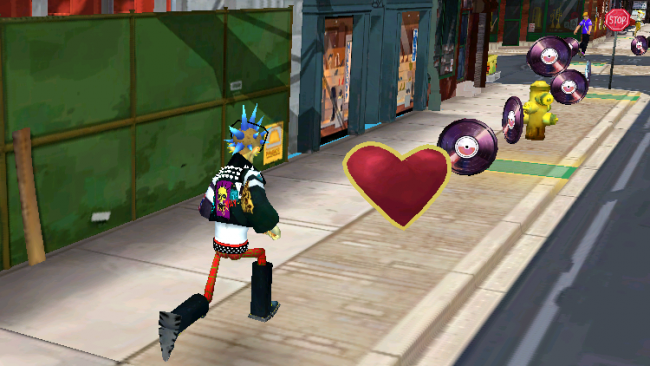 Record Run has the makings of a mobile best-seller: a short-burst, pick-up-and-play runner that lets players dodge obstacles to the beat of their own tunes.  With a triple-A pedigree from publisher Harmonix, known for catchy music game must-haves like Rock Band and Dance Central, the sky was the limit for this bite-sized behemoth.  Unfortunately, forgettable gameplay and a limiting IAP structure weigh down the experience and prevent it from soaring.

The main gimmick behind Record Run is a popular staple of the rhythm genre: you can load any song into the game and it will generate a level synched to that tune.  Like Audiosurf and Beat Hazard before it, Record Run has chosen this method of content generation as its banner, and has barely supplemented its user-provided music library with four built-in songs.

The problem is that Record Run also limits its user-injected library by forcing players to purchase “song slots” for every new song they wish to play, and offers no option to delete previously uploaded songs so a slot can be reused.  You’d better be sure you want a song in your library before you upload it, because it’s not going anywhere.

This would feel like a technical oversight—”We just forgot the ‘delete song’ button”—if it weren’t an obvious feature of the game’s freemium economy.  Because of this setup, players will have to grind current songs until they’ve earned enough premium currency, “backstage passes,” to purchase additional song slots—or simply buy more with real cash, of course.  Considering that song slots increase in price as you buy more, the entire system seems designed to punish players for wanting to enjoy exactly what was promised them: playing with their own songs.

The gameplay that you’ll experience with whichever songs are deemed worthy of permanent library status is a finite level-based rhythm runner.  Your character emerges from his favorite record store with a great haul, only to have his box of vinyl knocked across town by a haphazard driver.  He sprints off to reclaim the scattered albums while dodging sidewalk obstacles to the rhythm of the current tune.  The records you collect along the way match the beat of the song and act as the standard in-game currency, while the obstacle dodging fits key chord transitions and awards points.

Each obstacle has a green bar in front of it which not only highlights the danger ahead, but also indicates the zone you’re aiming to dodge within—swiping at the right moment will earn you a “perfect” and the highest score, while swiping too early or late earns varying degrees of “great,” “good,” “OK,” or “bad.”  There are only three actions available to your character to get around the busy city sidewalks: dodging left or right into the other of the two available lanes, jumping over an obstacle, or sliding under it.

Most of the time, the best course of action is simply swiping into the other lane. There are rarely two obstacles next to each other to prevent this, and Record Run recognizes left- and right-swipes more often than up or down.  Even if you use all the actions available to you—and some in-game missions do require this—there’s just not much gameplay or challenge present.  There are rarely frantic swipe-gauntlets or fast-paced obstacle placement.  The speed of the song doesn’t seem to affect the challenge: in games designed around their songs, like BIT.TRIP RUN! or Theatrhythm Final Fantasy, you’ll be thrown into crazy up-tempo rushes and then given a slower break to maintain variety and interest.  Record Run doesn’t have this—partially due to its on-demand level generation—but the result is a static, dull run that feels the same every level. 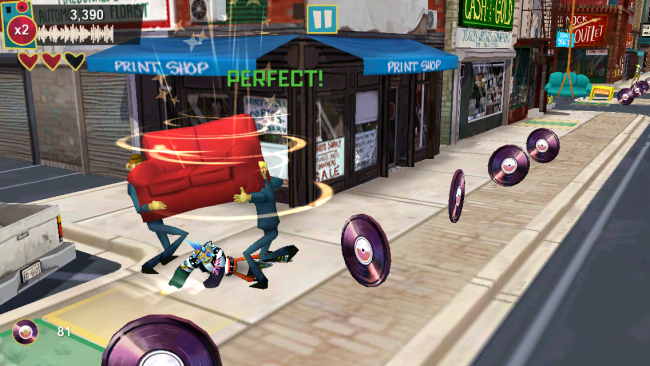 This problem isn’t helped by the lack of environmental diversity.  There is only one location to run within—the busy city sidewalk—and you’ll see the same locations and objects repeatedly.  The people and things dotting the street do dance to the rhythm of the music (including otherwise inanimate objects like benches and trash bags), which is endearing and entertaining.  But even this gets old after you’ve played enough levels and are grinding through the same songs and scenery over and over.

The level generation for player music isn’t perfect, but it was surprisingly accurate for most of the songs I tried.  It nailed the rhythm for “Little Drop of Poison” by Tom Waits, “Eleanor Rigby” by the Beatles, “You’ve Got to Walk” by the Bedquilt Ramblers (from Kentucky Route Zero), and “The Shape of Things to Come” from Battlestar Galactica.  It had trouble with “Now or Never” by Billie Holiday and “Battle Mode” from Super Mario Kart—which were surprising, as they both have strong beats—throwing obstacle transitions into weird spots.  All of the songs I played, among these and others not listed, uploaded without trouble and generated a level within a few seconds. 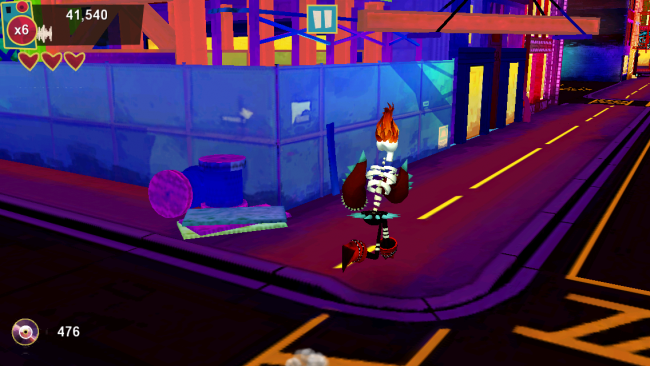 But even when the algorithm works well, the result is still fairly straightforward—a moderately more entertaining way to enjoy your music, but little else.  When it’s not dull, the runner gameplay is still confusing: players have to put themselves in harm’s way to earn a high score, since “missing” obstacles by running past them is worse than dodging them poorly.  The game doesn’t guarantee a trail of records in front of obstacles: often you’ll have to leave the safety of a record-filled lane to jump in front of a danger and then immediately jump back.  It’s a bizarre choice for a runner and feels unnatural.

Nothing about Record Run is unforgivably broken, but nothing is spot-on, either.  It’s like listening to a favorite song sung by a different artist in the wrong key; it’s familiar and almost enjoyable, but it never gets stuck in your head like the real thing.