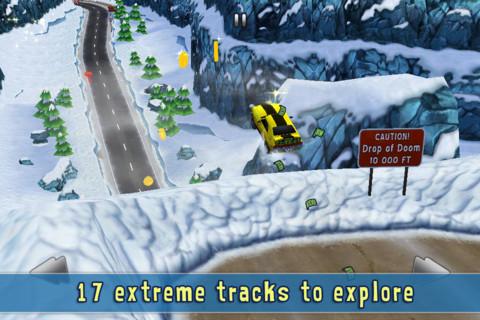 Reckless Getaway makes you the wheelman

So I robbed a bank last week. It was the perfect heist – we were in and out before security even began to suspect that something was amiss. We jumped into the getaway car, and we were away! We figured by the time the police had reached the scene, we’d be hundreds of miles away.

Unfortunately, our getaway driver had other plans. Rather than driving inconspicuously, he resorted to smashing all over the road, while piles of our hard-stolen cash flittered away behind us. Pretty quickly the police had put two and two together and were all over us – all thanks to that Reckless Getaway driver.

From the developers of Reckless Racing, this new title puts you in the driver’s seat of a getaway car as it speeds away from a robbery. Using the left and right arrows on either side of the action, you need to dodge around traffic, smash cops off the road, collect coins and fly off ramps.

Getting to the end is one part of your overall mission. Each level comes with a star rating, and the better you do, the more stars you’ll pick up. Coins and ramps give the most points, while overtaking traffic and driving into oncoming traffic will also grab you the necessary points.

The police are a constant threat, although they’re both a hindrance and useful, as smashing them in just the right spot will bag your lots of points too. The perfect run through a level means finding the best route that will give you the most jumps, coins and smashes.

The action is far too fast to be able to get full stars on your first go, and so in this way, Reckless Getaway is all about the replay value. You’ll be retrying levels over and over again in an attempt to drive with the best style possible – and it’s great fun every time.

For those worrying that the action will get samey too quickly, it’s worth noting just how varied the environments are. One moment you’ll be powering along a busy freeway, then flying down country lanes, and finally bombing it through towns full of Sunday drivers. With potholes, road hazards and incomplete paths abound, there’s plenty to keep you occupied and excited. 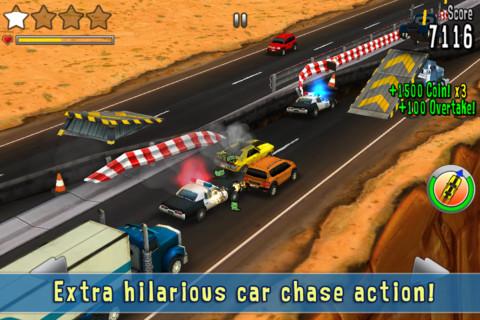 Apart from the main action, you can also choose ‘Wreckless’ mode. This puts you in a huge juggernaut, and asks you to plough through as many cars and obstacles as possible. Destruction means points, and it’s a serious amount of fun to swerve back and forth, destroying everything in your path.

Our only real gripe with the game is the rather floaty controls. The way the car moves does make sense in a way, as your swerve all over the place – you’re driving a getaway car, after all! But sometimes it can feel like you’re not completely in control, and trying to move just an inch to the left or right will usually prove impossible.

Throw in online leaderboards, and this is a fantastic release that’s well worth forking out for. Great for both short bursts of play and longer sessions, Reckless Getaway is leaving all its competitors in the dust.