Home / Reviews / Reckless Getaway 2 Review: Does What it Says

Reckless Getaway 2 Review: Does What it Says 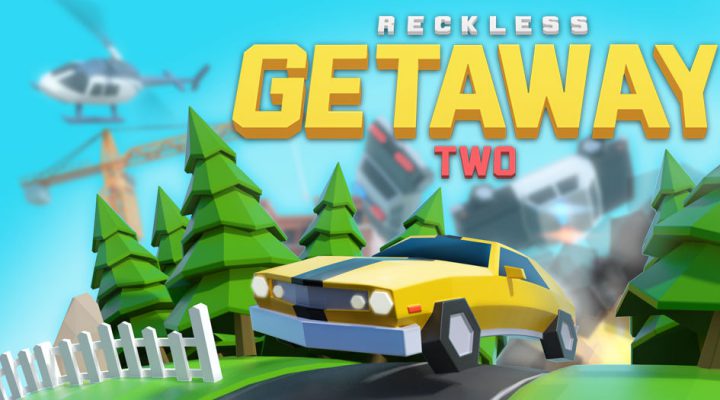 Not the most original game in the world.

Reckless Getaway 2 is a game about an ultimately doomed escape. It will end in fire. It will end in carnage. And there’s a good bet that you’re going to enjoy every second of it. Such is the lure of chaos, you can’t help but jump back in for another go.

There’s a little more than just driving quickly here though, and the game throws in enough ideas to keep things fresher than they have any right to be. Plus you’ve got a Crossy Road-style collection mechanic that gives you new cars and different backdrops regularly.

Everything is highly polished, and there’s a charm to proceedings that’s familiar without being too cloying. Basically, as simple arcade experiences go, Reckless Getaway 2 manages to get most of the things it does spot on. 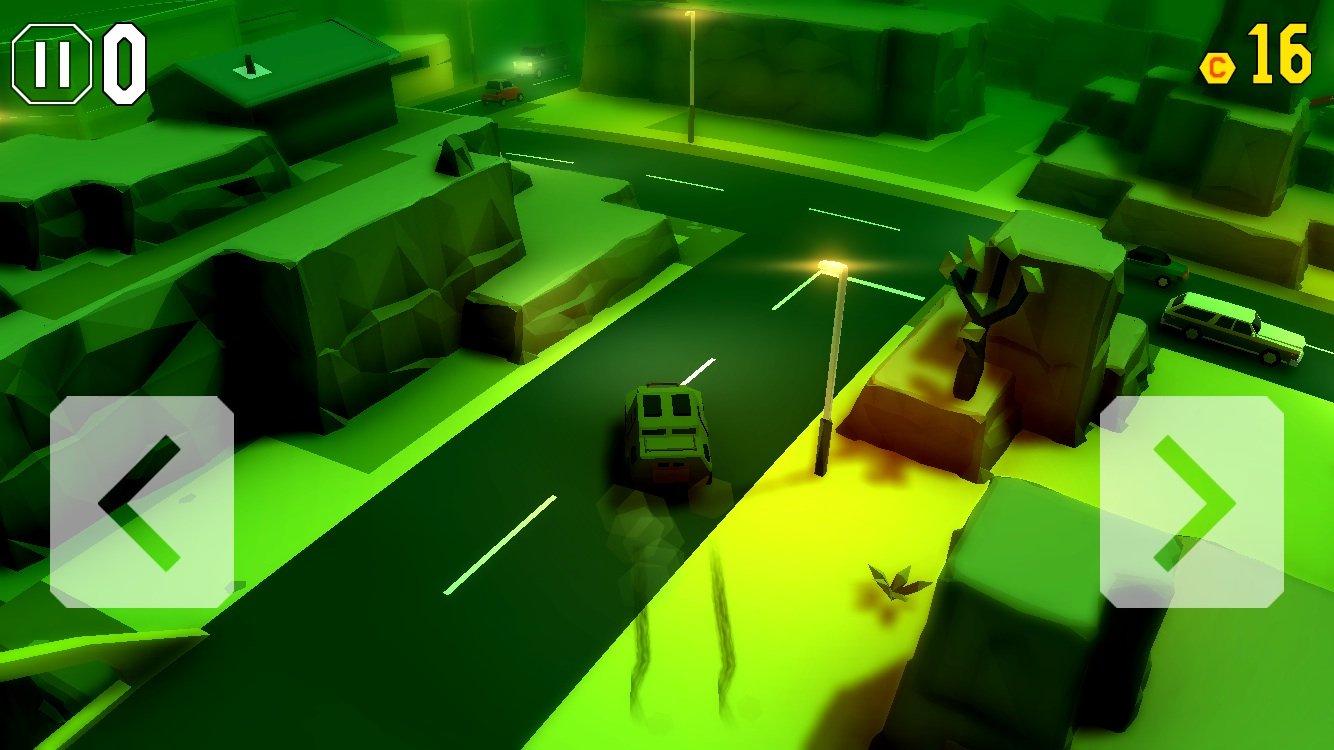 The game’s premise is simple. You’re trying to get away from the police, and the longer you survive the more points you’ll get. Acceleration is handled automatically, so you just need to worry about turning left and right by pushing the arrows on the screen.

As you play the police presence will increase. You’ll have a couple of cars chasing you to begin with, but soon you’ll be up against SWAT vans, road blocks, and stingers that will ruin your tyres. You can only take so much damage and once you’ve been battered enough your car will explode and you’ll need to start again. You’ll also lose a round if you get squashed into a corner by the police for too long. Or if you drive into one of the environmental hazards spread around the various levels. It’s usually for the best if you avoid driving into the water, let’s put it that way. 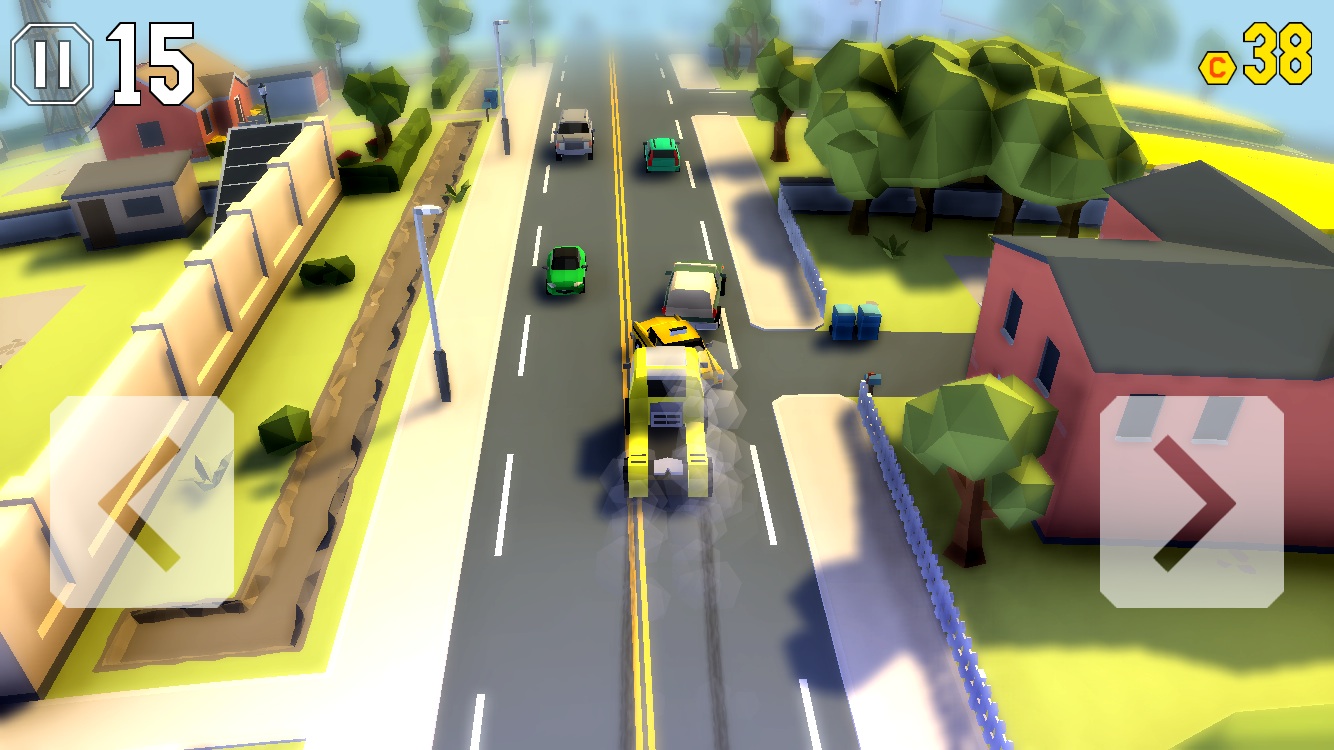 There are different sets of cars to collect, and groups of them have their own levels for you to play through. There are bright seaside resorts, smoky inner cities and dirty industrial areas. The vehicles bring their own style of play into the equation as well.

Nippy hatchbacks can take corners better, but heavily armoured APCs can take a lot more punishment. The cars unlock on a regular basis as well, so you’ve always got something new to try out if the cars you’ve got don’t suit your style of play.

Vehicles offer up challenges as well. You can find out what they are by checking the info pane about the different cars, but they’ll also pop up when you start them. You might need to knock down a set number of lampposts, or blow up a certain number of cars. Fill the gold bar in the top left corner of the screen and you’ll complete the challenge. 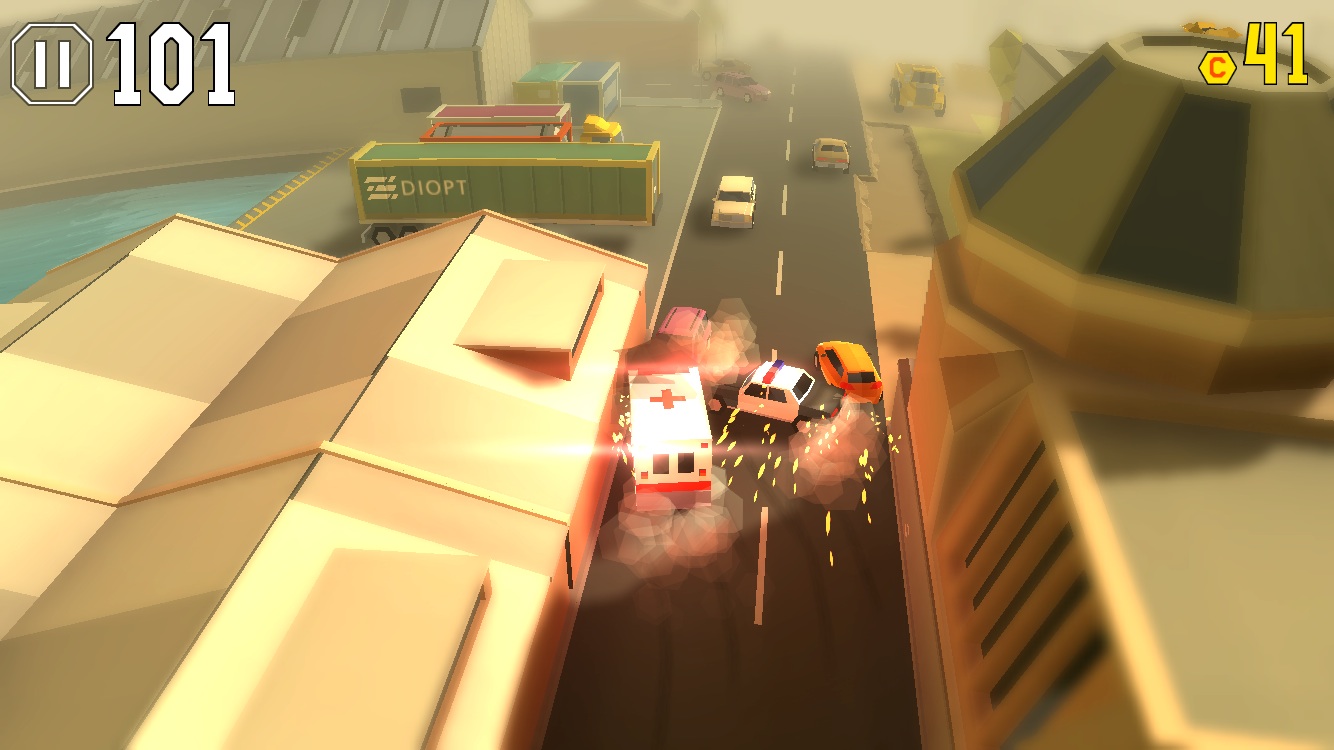 Everything about Reckless Getaway 2 just works. It’s not a complex game, but it offers a level of interaction that plenty of other games in the genre don’t. It’s engaging enough that you’ll dip in for one go and finally put your phone down an hour or so later.

It might not be the most original game in the world, but there’s a heart and passion here that makes the game really easy to like. It might not lodge itself on your homescreen forever, but it’ll almost certainly stick around for a couple of months. This is the sort of game you’re going to whip out from time to time. You’ll smash some fences, blow up a police cruiser or two and then put it down again. But you’re going to be smiling the whole time, and sometimes that’s all you want from a mobile game.