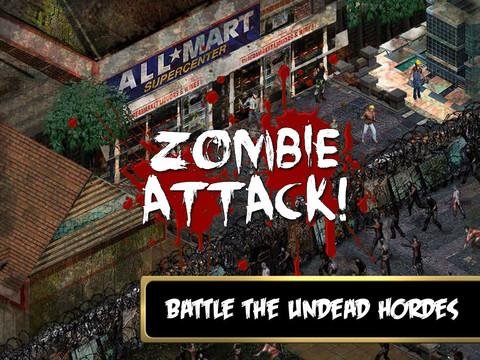 Things just haven’t been the same in this old town lately. Not since the zombies moved in and took it over. We’ve been pushed back and back, and now can only seem to hold this small area and call it home. But we’re short on supplies, and like it or not we need to fight back and retake the town. We need to Rebuild. But it’s not going to be easy… the city is overrun with the undead, and we’re already shorthanded. And there’s something clawing against the walls.

I want to be clear about this, to temper expectations of what you should expect when you play Rebuild. This isn’t Left 4 Dead or even Zombie Gunship. Rebuild is a game spent mostly in menus. You’ll organize search parties, manage resources, and fight off zombies through menu choices. It’s a sim-lite game, like a SimCity type of experience. You manage rather than actively engage in these activities, and then you’ll be informed of the outcome.

That’s not to say this is a bad thing. Not at all. If you dig this kind of game, then you’re going to have a bunch of stuff here to hook you in. It has all the hallmarks of a great resource management game with an excellent implementation of the zombie apocalypse. Resources are scarce, and there are never enough survivors to take care of all the emergencies popping up. Most times making a decision means picking the better of two bad choices. It gives you that feeling of constantly being on the precipice of dying.

But let’s start at the beginning. You start the game by building a character and choosing some starting equipment. Then you can choose how large the city you’re trying to reclaim is, and how difficult you want that endeavor to be. Word to the wise, when they say “impossible” they pretty much mean it.

The game plays out like a single player turn based game. Each turn you can choose to send your fellow survivors out on missions. Options like searching for supplies, looking for more survivors, or trying to expand the safe area of the town. When you assign people to those tasks you’re given a chance of success, which gives you a good gauge on whether or not you should send them or maybe send them with additional people. 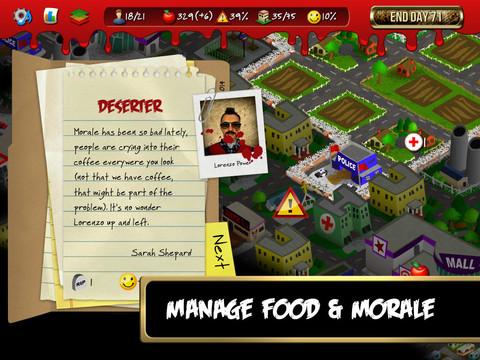 Each of these options takes a certain amount of turns to complete, so you need to manage expectations on what you’re going to accomplish. While it’s all fine and well to get everyone working towards the common good and expanding your safe area of the city, you run the risk of being undefended if indeed zombies attack and you’ve no one around to help fend them off.

As I said at the top, this is done mostly though various menus and status screens. That may sound boring to some, but much like a tower defense game, it’s fun to engage in the setup of a strategy and then watch to see how that holds up against opposition. Rebuild never gets overly complex, so you always feel like you have a handle on the progress, even if the never ending zombie threat means you never really have the situation totally under control. 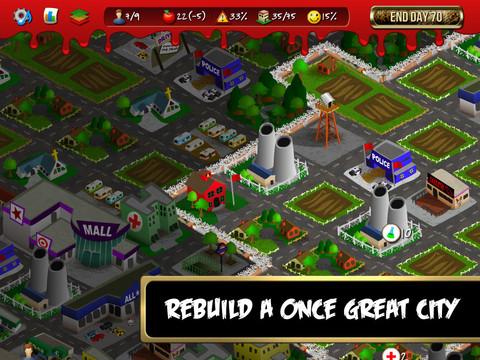 Our complaints are few, and focus mostly on the most surface of issues. I’m not a big fan of the art style. I found the map of the town and the drawings they used as the various buildings were a little too cartoony. The characters, as well, can borderline on the truly bizarre. And while there’s nothing wrong with that, I think it serves to diminish the feeling of dread and darkness that a zombie apocalypse should bring. I mean, it’s not like we`re talking Farmville cutesy or anything, but the art is still just a little too colorful for my taste.

Rebuild started life as a flash game, and can still be played in browser. I will say, though, that they did a great job of translating the game to the touch screen, and it’s a much better experience there. Rebuild isn’t especially deep or long winded, but it’s pretty engaging and will easily provide zombie fans with a taste for simulation a satisfying experience.