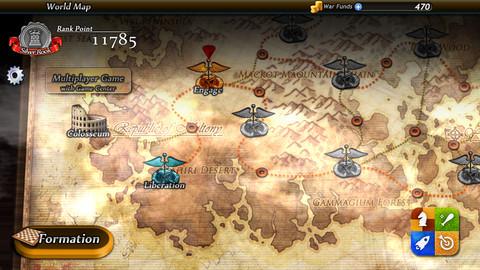 An accessible, expansive strategy RPG that runs into a few bumps.

Striking a balance between depth and accessibility has often been a hassle in strategy RPGs. Some games aren’t deep enough and others are too difficult. A select few games take the Goldilocks route and are just right. Rebirth of Fortune 2 comes close to finding that balance, but slow-paced battles and imbalanced multiplayer take away from what is otherwise a fun experience.

Rebirth of Fortune 2 starts off with a bit of story. Then, the story is all but over. Rebirth of Fortune 2 isn’t a game that relies on storytelling to make its impact, which isn’t a bad thing, but the way the game presents itself makes its limited story feel apparent. There are no main characters and there aren’t any long or drawn-out cutscenes. The game does little to connect with players on an emotional level. Players looking for another experience like Final Fantasy Tactics: The War of the Lionsmay leave a bit disappointed.

On the other hand, because Rebirth of Fortune 2 doesn’t try to be a master of storytelling, it is able to put more of its focus on battles and customization. The battles are the foundation of the game and they’re almost a pure joy to play. The system works like most strategy RPGs. Two teams start off on opposite ends of a grid-like battlefield, and they’ll take turns moving, attacking, and using skills. Unlike many similar games, Rebirth of Fortune 2 is entirely turn-based. One player will move a character and either attack or use a skill. Then, the other player will do the same to just one character. This process makes single player battles feel slow and clunky, but also feels welcoming to players who are either new or inexperienced in the genre.

The most important aspect to the game’s battles is the ether counter. Ether works like a magic gauge in that it allows characters to use skills and spells, but is stored in a pool that’s shared among the entire team. Battles start off with no ether, but the ether quickly increases after each turn. Even with its automatic regeneration, players need to use it wisely or risk running out at a crucial moment. Certain characters and classes will use more ether than others, and optimizing either use is essential for success. 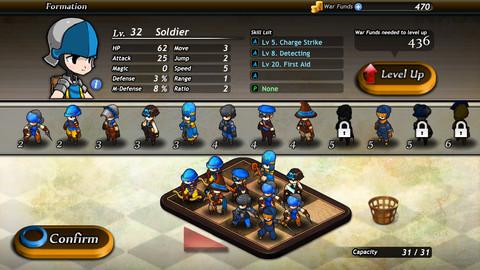 Outside of battle, players get a ton of customization options to improve their team. After a fight, players are awarded points, which can be used to level up character classes. As levels increase, the characters’ stats increase and they learn new ether-consuming abilities. When enough characters reach high enough levels, more classes are unlocked. There are around twenty classes, and each has their own set of stats and skills. Players take advantage of each class’ uniqueness when building their team. Each class is assigned a point value and players are given a set number of points to use with their team. As players progress, they’re awarded more points to make their team either larger or more powerful.

Players can take their team through the single player battles, most of which are easy enough to breeze through. However, the greatest potential comes from multiplayer. The multiplayer battle system works just as it does in single player. Both players use their set teams and take turns controlling characters and trying to vanquish the entire opposing team. It’s unfortunate that there’s no asynchronous multiplayer mode, as it would fit perfectly with the game. Instead, a multiplayer match must be completed in one sitting, which can either be quite short or very long. There are no level caps or equalizers, so one player may have a significant level advantage over the other, making it impossible for the other side to win. Players can purchase points to level up their characters, and the high points-to-money ratio may be tempting for players to strengthen their team early on. 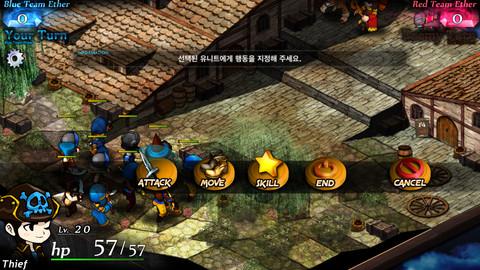 Overall, Rebirth of Fortune 2 has a strong foundation. Its high level of customization and ease of access make it appealing to a large crowd. It’s unfortunate that the turn-based battle system feels slow and clunky, and that the online play favors those who have either spent money or played deep into single player. That said, the game looks great, controls well, and is an accessible starting point for those who are new to strategy RPGs, or those looking for a combat-heavy addition to their collection.