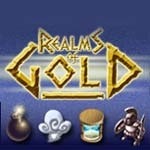 We all know the age-old tale of Odysseus, whose adventures were immortalized in all-time great poet Homer’s legendary Greek tragedy the Odyssey. Now you can you live the story as well, thanks to pattern-making puzzler Realms of Gold, which – despite the rather grandiose title – shines more for its ingenuity than any gilded lining. Albeit occasionally too clever and/or unpredictable for its own good, the outing manages to surprise and entertain in equal measures, offering expert-level gamers an amusing opportunity to give their brain a workout.

Like most offerings of its breed, the action in Realms of Gold revolves around creating horizontal or vertical groups of three or more similarly-adorned tiles. (Decorated here with all manner of colorful and exotic items ranging from fish to waves, seashells, clubs, rocks, fruit, chalices, pigs, goats, eyes and coins…) Doing so requires that you swap two squares’ positions on the randomly-generated grid that serves as each stage backdrop. You can only exchange tiles when doing so produces a match, which in turn removes the objects from play.

But wait – we’re just getting started. Standing somewhere as every level opens is a miniaturized figure of helmeted hero Odysseus, whom you must guide to a level exit that’s located on-screen. Of course, our intrepid star’s movement is entirely dependent on your actions, as he trots upwards or downwards, forward or back, based on the titles you eliminate.

More worrisome still, occasional obstacles like pillars and debris block forward movement. Power-ups such as keys that open locked doors, bombs which blow away obstacles or remove whole sections of tiles and swap icons (which let you trade places with any square) must also be collected. And, worst of all, a ticking timer’s constantly counting down, with remaining seconds all you have to cruise through an entire series of stages located at each featured location. (All based on familiar episodes like the Battle of Troy, the visit to the island of the Lotus Eaters and the showdown with Circe.)

Simple the game isn’t. After playing several hours, I still can’t reliably predict 100% of the time which way tiles (not to mention Odysseus, or the exit, which also shifts location when squares exchange places) will move. Nevertheless, you’ll get the hang of the basics within about 30 minutes, at least enough so as to quickly progress through the main story mode which serves as the tale’s bread and butter. The key here is to remember that, to paraphrase the old adage, sometimes to take one step forward, you must take two – OK, three to six – steps back.

The fact time carries over between each individual group of challenges doesn’t make things easier on beginners either. It’s for this reason that, regardless of the title’s catchy graphics (love the parchment maps) and snazzy sound effects (dig those sloshing waves), I recommend it primarily to those who want a little more challenge in their game play. By all means – beginners can have fun here too. I’d just plan on an exponentially greater number of restarts being required before you actually begin getting into the swing of things.

Then again, you never know – due to scenarios’ ever-shifting nature, you may find the game a breeze. Some early ending stages (where you’re tasked with collecting treasures like urns and rings) were a pain in the rump for me to plow through. Other, ostensibly more difficult, later encounters literally took seconds to complete, especially when I started employing bombs and swaps. What can I say? Because any title can immediately replace one that’s been removed, sometimes you just get lucky.

Be that as it may, Realms of Gold remains an excellent and intriguing take on the genre that should inspire a loyal following. By the time its creators get around to pumping out a sequel though, don’t be surprised if they finally work out the kinks, and the series’ success – like its headliner’s fame – soars accordingly.