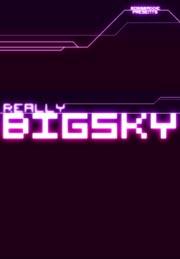 Late last year, developer Boss Baddie released Big Sky into the wild, an initially confusing space shooter that, through progression, trial and error, showed its true, magnificent colours. While it was definitely something special, there was always that nagging feeling in the back of our minds that so much more could be done with it. Enter Really Big Sky, an expansion on the original concept that piles on the explosions, powers and extra game modes to maximum effect.

The concept is identical to the first release – you are on a mission to blast through space, destroy all enemies and taking out numerous evil cores hidden away inside asteroids. Rather than starting off as a pro space pilot, however, you’re simply a rookie with an old banger of a ship to match.

Your first play will most likely last less than a single minute. This is because Really Big Sky features one-hit deaths throughout. Touch a single enemy, bullet or space rock, and you’re a goner – no lives, no health bar, just instant death.

Beginning the game with weak bullets, terrible speed and no powerups to speak of means that your chances of survival are very slim, and making it to the very first boss is nigh-on impossible. However, when you die your points are converted to cash, and this cash can be used to buy upgrades that will be available to you in future flights.

This is Really Big Sky‘s core mechanic. After a dozen attempts, you’ll have a much beefier ship and be able to survive just that little while longer. It’s a wonderful idea, giving the sense that you’re really growing in power and progressing through the ranks to become a true hero.

If playing through the same thing over and over again doesn’t take your fancy, there’s no need to worry – everything in Really Big Sky is randomly generated, from the levels to the enemy placement to the bosses, so every time you play, it’s slightly different. You’ll go a good few hours before it all begins to feel a little samey, and even then you’ll still be having a whale of a time.

Just to set itself apart from regular space shooters, Really Big Sky also deploys a special drilling mechanic. Hit the drill button, and your ship will spin around, allowing you to burrow through rocks and huge planets. However, you can’t shoot while drilling, so it’s essential to balance usage of it and only use it when the time is right.

If you’ve played Big Sky, you’ll know that all of this is rather familiar up to now. However, this upgraded version deals a whole host of new features, the biggest being the inclusion of six new game modes on top of the original. Each needs to be unlocked, but provides a whole new experience, from the non-shooting larks of Pacifism to the literal Nightmare mode.

There are great little additions here and there too. Co-op gaming with a friend is now available, giving you the chance to blast through it all with a partner by your side. Online scores for each mode also kept us well entertained and added to the replayability. To top it all off, there’s a new British voiceover which adds a little personality and, now and again, hilarity.

Really Big Sky is definitely an improvement over the original, but some of the issues from before still rear their heads. Overall it feels more wholesome, but certain parts can be confusing and we felt like there were powers and abilities that we just didn’t understand how to use properly.

There’s also a new problem in the form of loading times. When viewing the online leaderboards, your whole computer may crash as a result of the game failing to find the scores, and we had to quit the game multiple times to fix the problem. Of course, the solution is to simply not look at online scores, but then that makes the whole feature pointless!

Really Big Sky is a brilliant improvement over the first release, adding so much more content for a fraction more than the original price. If you paid for and played the first one, you may want to knock the score down to four as it’s more like Big Sky 1.5. However, if this is your first tussle with the Sky, you’ll have a blast.