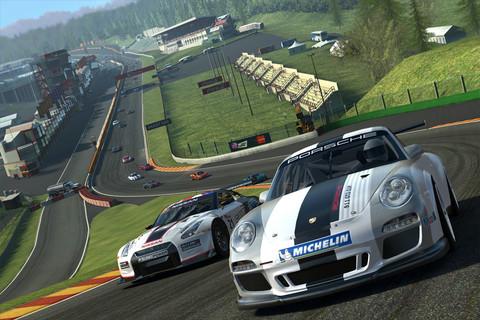 Firemint’s Real Racing franchise has long set standards for iOS gaming.  And not just racing games, either.  The team at Firemint (now Firemonkeys) have consistently set the bar ridiculously high for graphics, accessibility, and iOS-first design strategies.  This probably had a lot to do with why EA bought them back in 2011.

But in terms of mobile games, 2011 was a lifetime ago.  A lot has changed since their acquisition, including a major shift towards the free-to-play business model.  And whether it was a conscious decision on their part or the result of pressure from their new EA overlords, Real Racing 3 has become the series’ first entry to embrace this model. Does it get the checkered flag for F2P design?  Or is it another case of trying to shove a square peg into a round hole?

The answer seems to lie somewhere in the middle.

Before we look at the business model though, it’s probably more important to answer the one fundamental question all games should be judged by: is it fun?  If you’ve played any of the previous Real Racing games, you won’t be surprised to learn the answer is a resounding yes.  The racing mechanics are just as tight as ever, the cars and tracks are gorgeous, and the sheer variety in event types will make your head spin.  Standard cup races, head-to-heads, eliminations, endurance, top speed records – the list goes on and on.  If you’ve been worried that one race is going to feel just like another, you can put those fears to bed.

The biggest addition to the series this time around is ‘time-shifted multiplayer,’ or TSM.  Rather than racing against straight AI, you’ll be pitted against the best times of real players from around the world as controlled by an AI driver in every race.  This means you can take on your Game Center friends whether they’re online or not, and their cars will still react accordingly when you smack into them, regardless of their actual performance when they set their time.  It’s a really cool feature, and a great evolution of asynchronous play.  And yes – just like a good leaderboard, you’ll find yourself replaying races over and over again just to leave your friends in the dust.

The other change, as we’ve already mentioned, is in the game’s new free-to-play approach.  Before I get into the nitty gritty, let me tell you two things that everyone can be happy about: there’s no energy bar, and if our experience is anything to measure by, you can play this game as much as you want without ever needing to spend a dime.  Good, yes?

But there are also things that some people might find more objectionable.  The game has a strong soft currency element.  You’ll earn a lot, but you’ll also spend a lot.  Every car can have plenty of upgrades, but each of those cost money.  So do the cars.  And so do repairs.  And maintenance.  You’ll be expected to spend soft currency at just about every turn, and there’s bound to be a temptation to buy some if you just want to hurry your progress along (and I’m sure Firemonkeys and EA would greatly appreciate it if you did).

Most of these purchases come with a time constraint, too.  Need to have your brakes serviced?  You’ll be spending currency and waiting for a set amount of time before it’s done.  And since you can’t use your car while you’re waiting, you’d better hope you buy a second one early on if you want to play uninterrupted.  You can speed things up with premium currency, because money money money.

If any of this is sounding familiar, we’re not surprised.  CSR Racing seems to have had a big influence on FireMonkey’s monetization plans, albeit without the energy bar.  As a fan of CSR Racing, I’m perfectly happy with this fact.  (And on a side note, Firemonkeys seem to be a fan of that game as well; the new “drag race” event is a straight copy of the CSR Racing formula.) 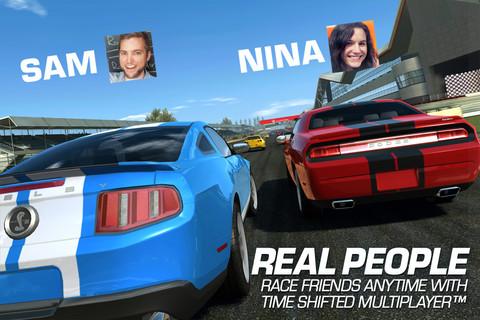 On their own, these new elements (TMS and F2P) work beautifully for the series.  But when you see how they work in tandem with Real Racing’s “assist” feature,it becomes pretty clear that balancing new features with old might have been a tougher task than Firemonkeys was prepared for.

Players will have the option of enabling steering, traction, and braking assists to make the whole experience much easier on first time virtual drivers, leaving them to do little more than tilt their device and occasionally tap a brake if they’re making a particularly tight corner.

Assists work well in other titles, but when so much of the appeal of Real Racing 3 is based around time shifted multiplayer, it creates an uneven playing field.  Veteran racers will want to shut assists off, but when you compete against times from players who leave them on, you can’t help but wonder how unrealistic a target those assists have created.

And because of the freemium model around Real Racing 3, there’s a financial disadvantage for turning off the assists too.  Since you’ll have more direct control over the car with them off, you’re bound to bash into things more often – and every bit of damage costs you money to repair.  While an average race with assists on would net me between 0 and 2 repairs needed, driving with it off would require upwards of 7.  When you’re trying to save up for new cars and upgrades, having to funnel extra funds to keep your current set of wheels running is a big negative. 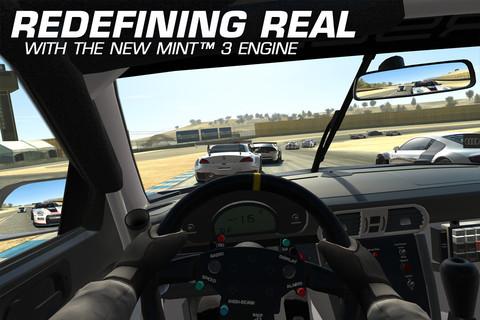 This leads to the only question gamers have to ask themselves; do I want to turn off assists and play the game how I feel it should be played, or leave them on so I can have more currency and an easier time competing against players who also leave them on?

When you break it down though, Real Racing 3‘s good handily outweighs its bad.  There’s plenty of variety in race types, more vehicles than you can shake a stick at, and even if it’s not ideal, old school racing fans can still have plenty of fun with the assists on.  Also, time-shifting multiplayer never gets old.  It’s the perfect marriage of ghost times from racing days of yore and the asynchronous multiplayer of free-to-play games today.

Once you get over the assist-related speed bump, there’s little to not love about Real Racing 3.  The freemium business model and CSR Racing-inspired changes might not be for everyone, but those who can get on board with these tweaks will find themselves more than happy to strap into the driver’s seat.