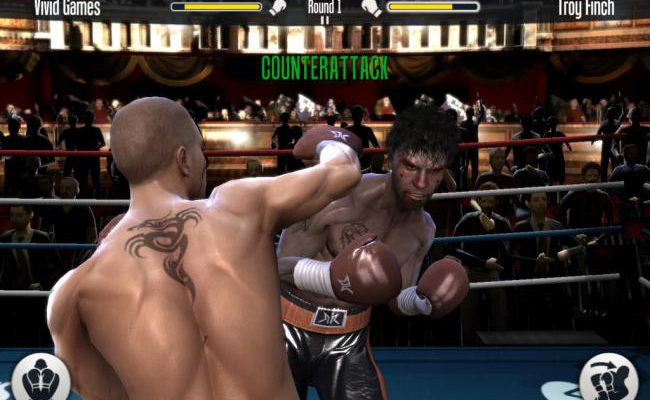 It could’ve been a contender.

Boxing and video games have had a long and storied history.  Punch-Out, Ready 2 Rumble, Fight Night – whether arcade fun or a full simulation of the sweet science, there’s no avoiding one simple fact: punching feels good.  Real Boxing is looking to set a new standard for the sport, but does it punch itself out by trying to be more than it needs to be?

Unlike most games that you’ll find on iOS devices, where touching, tilting, and tapping have become the norm, Real Boxing is a game that takes its name quite literally.  That’s right – you’re expected to do some real boxing when you play this.  But… how does that work?

The short answer: not as well as we’d hoped.  Here’s the long answer;

Real Boxing uses your iPad’s front-facing camera to track a player’s movement.  In essence, it’s trying to introduce Kinect-style gaming to the iPad.  The problem?  It works just about as well as Kinect-style gaming on the Xbox – which means it’s spotty at best.

The game isn’t trying to track 1:1 movement though – it’s just looking for you to set its sensors off in a few key areas.  Punch to the left or right and you’ll deliver a mean hook.  Punch straight up with either hand and you’ll dish out a devastating jab.  But the game doesn’t track these movements nearly as well as it needs to, and you’ll often find yourself throwing your arms around like a madman while your on-screen counterpart just stands there.  If it wasn’t for the savage beating he’s receiving, you might think he was waiting for a bus.

By contrast, the game offers an alternate set of touch controls that are spot on.  Swiping and tapping feels great. You can really get into Real Boxing if you forgo its main selling point – that it allows you to play using real boxing.  But there’s a problem here too – at launch the game is pretty bug-ridden.  In our time with Real Boxing, we were never able to get beyond the touch controls tutorial because once knocked out, our opponent would just lay there.  The clock would tick out, our boxer would just stand there, and if we wanted to try again we’d need to force a restart.

Even if they manage to fix this bug and let players enjoy the touch controls in-game, Real Boxing doesn’t build enough around these controls to keep players engaged for long.  Training mini-games offer a bit of fun, but the opponents lack any real flair or uniqueness, leaving fight after fight feeling largely the same. 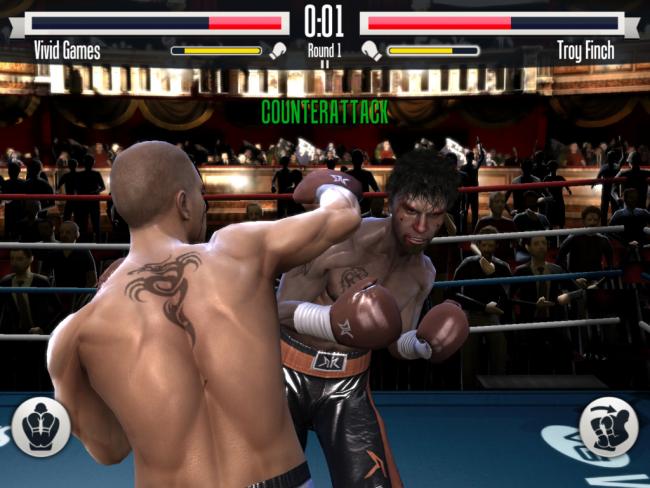 Touch controls aren’t the only technical problem, either.  I’ve had menu options that wouldn’t accept my tap unless I exited that menu and re-entered it.  And in the strangest technical twist, the game doesn’t force the iPad’s sleep timer off.  So if you’re punching yourself stupid round after round, it’s only a matter of time before the screen goes dim and then shuts off entirely, waiting for you to walk up to it, push the home button, and swipe to continue.

The game’s visuals are fairly top notch, but even here there were some noticeable issues.  All of the fighters, for example, had the exact same face.  Investing time and money into delivering an HD experience, but then not doing something as simple as having more than one face shape?  It’s an utterly bizarre oversight.

Real Boxing wants to be the iPad’s answer to Punch-Out for Wii, but instead, well… it just makes me want to go out and buy a copy of Punch-Out for Wii again.  Flailing your arms can be plenty of fun, but unless those flails are going to translate into on-screen action 99% of the time, it just ends up feeling like an exercise in futility.  The touch screen controls are tight, but I just wish Vivid Games would have spent their motion controls budget on tightening up everything else.

Journey: The Heart of Gaia Review