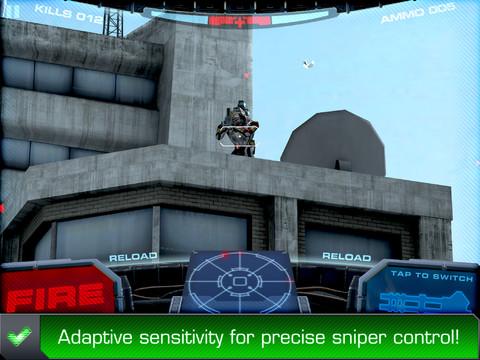 Razor: Salvation tries to provide salvation for FPS fans on the iOS

We’re about to enter the summer of 2012, which will feature some of the biggest blockbuster films of all time. Traditionally, the biggest of the blockbuster movies feature common antagonists: aliens, robots and zombies being the most popular. The folks over at Crescent Moon decided to unleash all three in Razor: Salvation, which they hope to be a blockbuster in its own right. But is it the equivalent of The Avengers or John Carter?

In Razor: Salvation, you’ll take control of the gun atop a drop ship that has been sent to save helpless citizens from the wreckage that is crashing down around them. With aliens flying down in mech suits and turning humans into zombies (no, seriously), your job is to provide protection for the last few survivors as they rush to your ship for safety. You lay down cover from your gun, which turns a full 360 degrees but cannot move from its position.

The guns you’re armed with start out weak, and your options are somewhat limited. But with some advancement in the game–or a few real world bucks–you can upgrade your armory and start mowing down the unwelcome invaders with relative ease.

The options for firearms ranges from a mini-gun to a rail gun, with explosive options like mortars, grenades, and rockets in between. Upgrades include everything from reload speed, rate of fire, and how much ammo a clip holds. Your ship is also upgradeable, allowing you to increase its armor so you can stay in the battle for much longer.

The gameplay revolves around shooting, and not a whole lot more. Aliens are scattered about the level, popping up on your radar from all angles. It’s your job to gun them down, turning on a swivel to put them between your crosshairs. The longer you last, the more baddies that will appear, until you become overwhelmed and your ship takes too much damage for you to fight any longer. That’s really all there is to it.

The idea is that the more enemies pop up on the screen, the more intense it gets. There are moments of disarray where you’re attempted to spot where exactly your attacker is hiding, and sometimes you’ll get the sensation of being engulfed by enemy fire when more and more invaders arrive, but overall it’s a pretty underwhelming experience.

The guns don’t feel that great to shoot–you never feel like you’re hammering bullets out of your gun and into the chest of an oncoming assault–and the entire process of spinning and shooting just feels like swipe, tap, repeat. 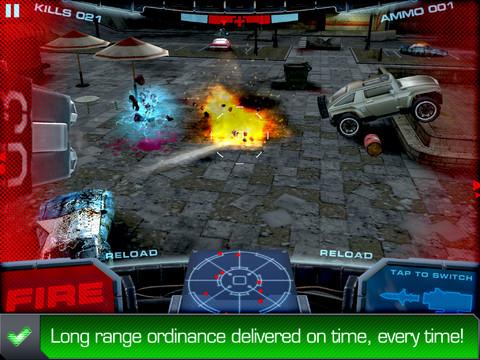 Razor: Salvation isn’t exactly a perfect offering, either. There are some technical issues that complicate the whole saving the world thing. Hit boxes are occasionally off (or feel off, at least), and there’s an occasional slow down in the gameplay that’ll have you spinning aimlessly in hopes of shaking the sluggishness. It makes the already underwhelming experience of manning a giant gun even less appealing.

As far as first person shooters go, Razor: Salvation is about as middle of the road as you can get. It has all the expected weapons at hand, the enemies aren’t anything special, and you never feel like you’re totally lost in the game–even with the enhanced graphics. Technical difficulties prevent this title from being the crowning achievement in “average.” The first five minutes are kind of fun, but it’s all downhill from there.