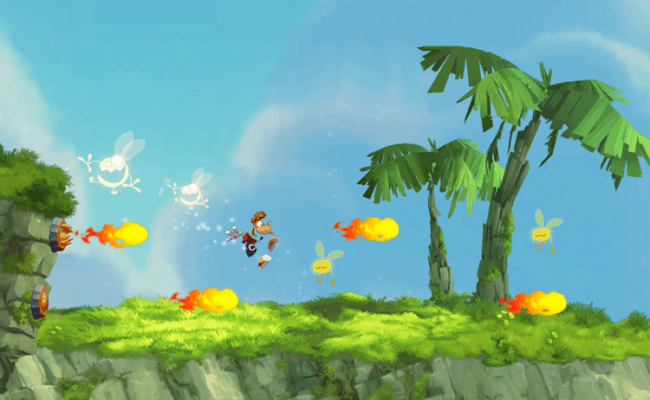 In case you haven’t noticed, a touch screen interface is pretty different from a physical controller. Shocking stuff, I know. But many companies have chosen to ignore that detail and shoehorn their console games onto a mobile platform they’re not suited for. When this happens, it’s ultimately the players who lose. Ubisoft made that mistake in the past with Rayman 2, but they swiftly dodged it with Rayman Jungle Run, a game that both understands and embraces the limitations of touch screens.

Rayman Jungle Run is in no way a port of Rayman Origins, though it’s home to the same gorgeous art style and 2D platformer gameplay. It’s best described as a spin-off; a game that tones down the intricacies without stripping away what made its predecessor so darn fun. Rather than hand the player the keys to every move in Rayman’s wheelhouse, it bundles each one with a set of nine levels (there are 36 main levels overall). The first is jumping, and it plays not unlike a typical endless runner; albeit a very good one. From there it’s flying, running up the wall, and punching. Each set of levels lets you use the moves you learned in previous sets, which allows the game to increase its complexity in both a digestible and decidedly mobile way. 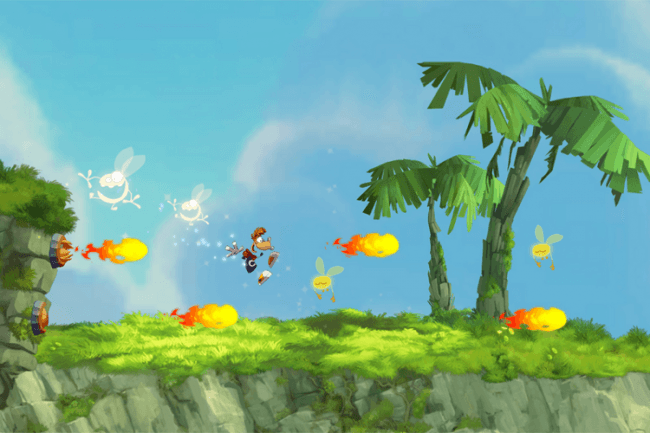 Every level contains a number of orbs (titled “Lums”) to collect, and nabbing all of them awards you a tooth, five of which grant you access to one of four “Land of the Dead” levels. Believe me when I say you’ll have to replay plenty of levels in order to discover each Lum. While a lot of them are easy to spot and pick up, others are hidden pretty well considering the game’s linear structure. You’re always welcome to ignore hidden Lums and just race to the end, but seeking them out is just as rewarding as finishing the level. Especially if you’re a completionist like myself.

It may sound like hyperbole, but Rayman Jungle Run is one of the most gorgeous games I’ve seen on iOS. The retina screen and UbiArt engine were made for each other, and I found myself replaying levels just to absorb the gorgeous backdrops all over again. Well, that and because I felt compelled to nab every single Lum, but you get me. The music is similarly fantastic, and a few perky tunes from Origins made their way into the game, along with a handful of new, similarly bouncy tracks. I realize playing with the sound on isn’t always feasible with a mobile game, but I recommend popping in headphones whenever possible. Guaranteed, you’ll be humming the music for quite some time after. 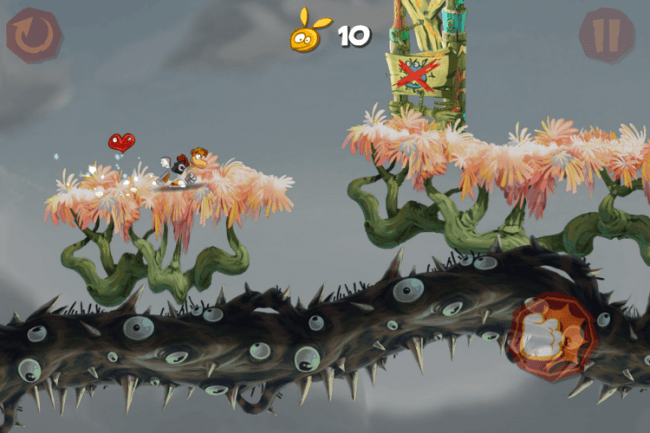 My only real complaint – and one that ironically serves as a testament to the game’s quality – is that I crave more levels. I’ve had a ton of fun returning to the ones available and aiming for perfection, but I’d be more than willing to pay another $2.99 for an additional 40 levels. And another 40 after that, even. Get on that, Ubisoft!

It is with no hesitation that I say Rayman Jungle Run is a must-own title for every iOS user. Its bite-sized structure fits perfectly on iOS, and Ubisoft has done a fantastic job crafting a complex experience that works perfectly with a touch screen interface.

Runner games, the bar has been set.