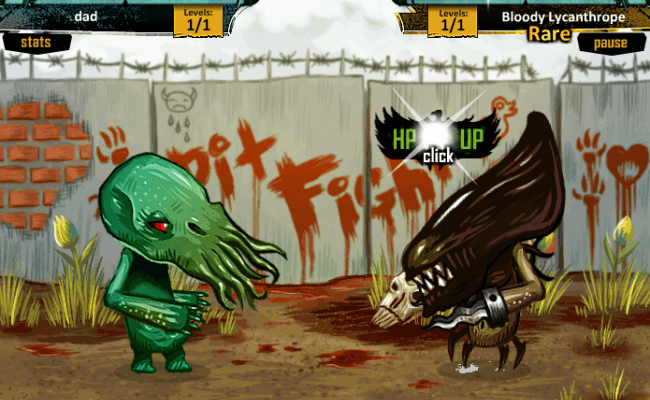 These monsters are flawed, but still lovable. Just don’t hug them. They hate hugs.

For as long as Game Freak’s Pokemon games have been around, other game developers have been inspired to add their own spin on the monster-collecting formula. Some studios just ape the games directly by scribbling over Game Freak’s designs with a crayon and calling it a day. Other studios, like Tremor Games, make a real effort to separate themselves from the clones with titles like Rawr. Rawr maintains its own identity with the help of an intriguing battle system and over-the-top grunginess, but its mechanics need some tightening up before it can even think about slaughtering Pikachu.

Rawr pits you and your monster pal against an unscrupulous mega corporation that aims to level the wilderness near your home. You need to beat up the King Scumbag in charge of the project, but he’s got a lot of genetically-engineered monsters on his side, too. Luckily, the problem can be solved with violence, though relying on your fists alone is a sure path to failure. You need to build up your monster, feed him, teach him new skills, and tuck him in at night (okay, maybe not). 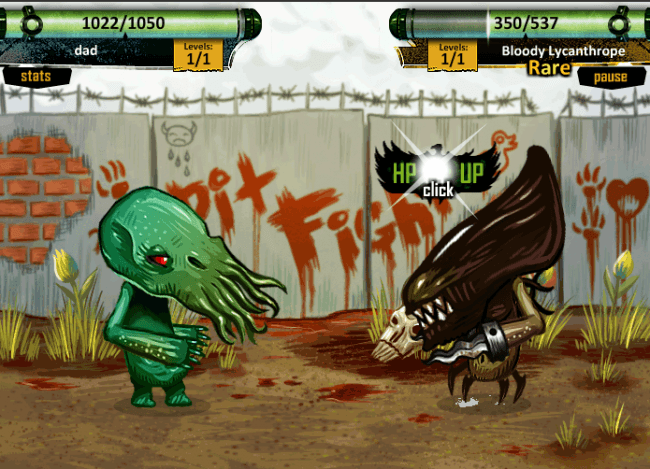 There are several resources across town that let your monster be all that he can be, but most of your time is spent fighting with random monsters in the pit. Rawr‘s battles are one-on-one. Your monster and your opponent rip into each other automatically with physical, magical, and psychic attacks, but you can influence the outcome of the battle by clicking on icons that pop up throughout the fight. For instance, if you click on two “HP UP” icons, your Rawr will regain a little health. If you click on two “SPECIAL” icons, his special attack will go up for the duration of the fight. It’s a clever augmentation system, if a little mindless. Also, the “SPECIAL” and “ATTACK” icons look kind of similar and are the same-ish color, so you often end up hitting the wrong support in the heat of the battle.

Your Rawr’s body parts are upgradable, so you can give him tougher armor along with longer claws and/or pincers. The monster’s appearance changes according to what he has equipped, which is nice, though the Rawrs themselves all carry the same basic body structure. 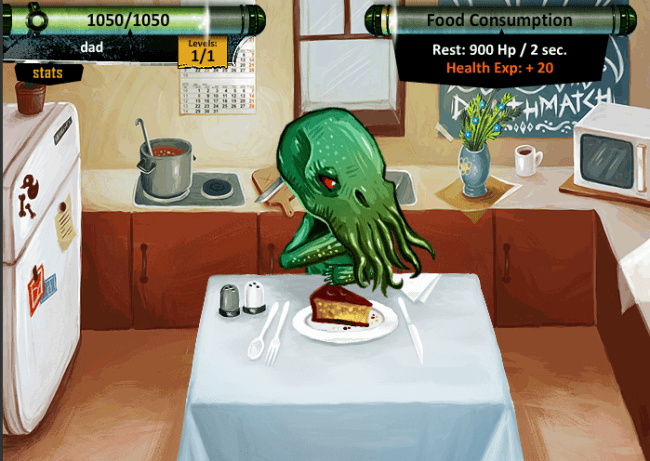 Your Rawr can also receive beneficial power-ups according to what he’s fed at the end of each day, but no matter what precautions you take, you’re going to find yourself terrifically outclassed from time to time. This is especially frustrating when you need to take on a boss, since you can’t progress until you win. The end result is a lot of grinding for levels. You can break up the monotony with a little PvP, but only if you have another player’s friend code. There are no random match-ups.

Rawr has some great ideas. Its atmosphere is also gritty to the point of parody, which makes the world fun to experience. The repetition and frustration might drive you away in time, but at least you can say you spent a few hours in the company of a ripped, bipedal purple unicorn with blood-red eyes.