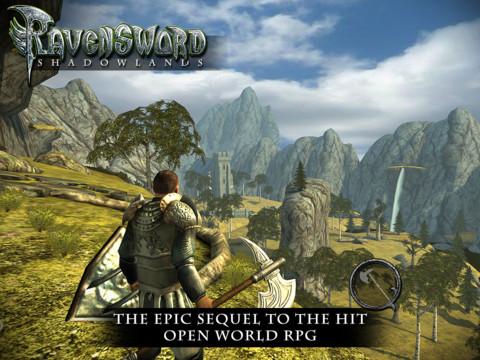 As epic an RPG as you’re ever likely to play.

If you’re going to borrow, you may as well borrow from the best. The much anticipated fantasy RPG Ravensword: Shadowlands owes a lot of its look and feel to the Elder Scrolls series, particularly Oblivion and Skyrim. Considering the popularity of those titles, Crescent Moon Games was smart to pick them as its muses, and despite a little bit of unevenness, the result was worth the wait for iPhone and iPad owners.

No knowledge of the previous Ravensword game is necessary to take on this sequel. Your character is thrown into the fire in what turns out to be the battle of Heronmar, an epic clash between humans and dark elves that ends with everyone dead – except you, because the game would be pretty short otherwise. As it turns out, that battle turned out the way it did due to a demon lord from the Shadowlands that almost broke through to the kingdom of Tyreas. Now some evil sorts are trying to bring him back, and only you can prevent that by finding the three Ravenstones, which in turn will reveal the Ravensword.

How you do that is up to you. Everything about your character is customizable, from his appearance to the way he goes about dispatching monsters. There’s no class system, and your skills in different kinds of melee and ranged weapons increase the way they would for us non-video game folk: By using them. You can also learn magic, giving you all kinds of possible combinations of ways to dish out damage.

Attribute and talent points earned while leveling up can reinforce your decisions by boosting either melee or ranged weapons damage. They help in other logical ways too, such as increasing Strength so you can carry more and wear heavier armor. Some talents are useful out of combat, especially the ones that increase your lock-picking and pickpocketing abilities. Thief types need to be wary of getting caught in the act however, as your reputation with NPCs will suffer if you do.

Your initial steps into Tyreas are guided by a guild of adventurers, reduced by circumstances to just two members. The game does a good job of distinguishing which quests drive the main story forward, fixing one of the common complaints from the first Ravensword, and while the mini-map can only track one quest objective at a time, it’s remarkably usable considering how little screen space it takes up. Talking to other NPCs can set you off on a number of side quests, so it pays to be friendly to the townies.

The open world aspect of Ravensword: Shadowlands is one of its big selling points, and it is fun to explore some non-linear adventures on your iOS device. It does have some limitations though, as there are physical barriers out in the world that prevent you from reaching certain parts of the map as freely as you might think. You can also very easily blunder into places with monsters that will quickly kill you off, although people with an aversion to hand-holding in their RPGs may see this as a positive. A fast travel system that can instantly whisk you to any region you’ve already visited is welcome, as is the option of saving your game at any point. 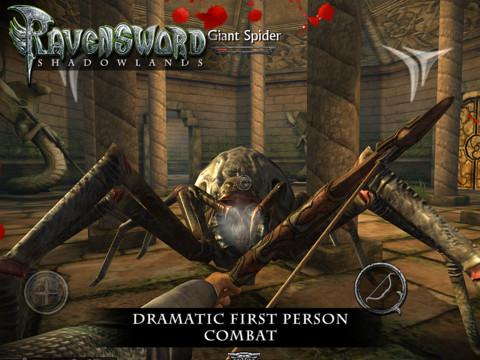 The control system is another good news/bad news aspect of the gameplay. Out of combat, the combination of virtual thumbstick and a small cursor that can be swiped to change where you are looking or heading works great in either first-person or third-person camera modes. In fights it’s considerably less great, forcing you to rely on the auto-targeting system because you can’t swipe fast enough to spin quickly to take on enemies attacking from your sides or rear. Hitting the mark with ranged weapons can also be unreliable, making anyone who wants to use the otherwise nifty stealth system happy that missed shots don’t automatically reveal you to the bad guys.

There’s less to nitpick about the graphics and sound, which push the limits of what we’ve seen from iOS RPGs. The game’s visuals fill up the screen with color and motion thanks to the Unity engine, and only the occasional time your character or the monsters get stuck on some of the scenery pulls you out of the experience. A suitably adventurous musical score plays in the background, and important NPCs have voice acted lines for some of your interactions.

I made it this far and haven’t even mentioned that there are mounts to ride and a basic housing system that you can access a bit later in the game. Crescent Moon really went all out on the ambition front, packing Ravensword: Shadowlands with all kinds of features. That makes some of its less than perfect areas easier to overlook, and there’s more to recommend than not on this particular trip to Tyreas.