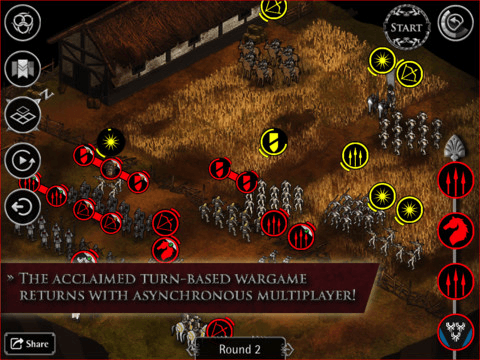 A triumphant return to the chaotic land of Eclisse.

Witching Hour Studios doesn’t play when it comes to its strategy games. After blessing mobile gamers with the well-received Ravenmark: Scourge of Estellion two years ago, the studio returns to the same setting for Ravenmark: Mercenaries. And while asynchronous multiplayer is the big story, it’s not the only reason that this free-to-play game of tactical war-gaming is worth some storage space on your iOS device.

In the game’s own words, there is chaos across the land of Eclisse. Assuming you haven’t played the first game, your first steps into this world are provided by the Dame Galea, who wants you to break a certain bard out of prison. The tutorial missions introduce the strategic concepts that drive the turn-based battles, but there’s a big decision to make first: whose side are you on?

Your choice of nation affects your starting troops and banner, but everything in the game can be unlocked by playing – or faster by spending money. The Federation of Varishah, Empire of Estellon and Commonwealth of Esotre all have their own strengths and weaknesses, though there’s nothing stopping your band of mercs from trying to curry Favour with all of them.

To do that, you can take on Contracts which are resolved instantly and use just one of your units (called Brigades here). Success means some silver for your coffers and Favour with one of the warring sides, while failure carries a loss of the latter and keeps your Brigade out of action for a longer period of time. Contracts reset every 13 hours to make them replayable on a daily basis.

The real messy work is done on the battlefield in Border Skirmish mode. Here you’re actually duking it out with an AI opponent, choosing a full Division of four Brigades to march into combat. The lead Brigade is always first to fight, but you get a chance to see some of your opponent’s forces before deciding on a second brigade to commit.

That’s not an insignificant point, since a big part of Ravenmark: Mercenaries is recognizing which units might have advantages against certain foes and weaknesses to others. There’s something of a combat circle of life to follow (Ranged -> Infantry -> Polearm -> Cavalry -> Ranged), and the right mix of troops is critical. The computer AI is fairly unforgiving, though the easiest skirmishes can sometimes be won through sheer numbers. 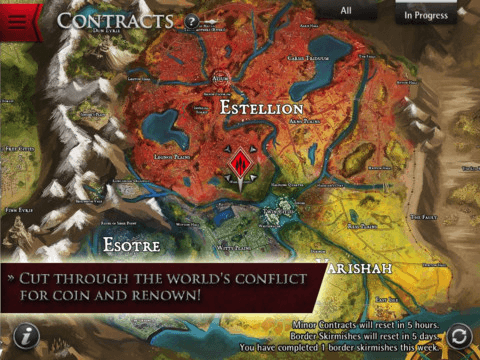 The considerations during each turn of combat are numerous. Units can be given specific move orders or standing orders like advancing or pursuing a particular enemy. Flanking is an important tactic, as is a unit’s zone of control that can force an enemy to stop and fight. Like-unit types can be joined together in formations that grant special bonuses, while commanders have powerful abilities that can easily turn the tide if used properly.

It’s a lot to manage, but the turn-based pacing makes it manageable, as do the relatively small maps. Both sides issue their orders before any of the action plays out, and there’s a small random element to the initiative order that keeps things interesting. In short, it’s a near perfect balance between simplicity and tactical depth.

Brigades used in battle can’t be called upon again for a specific amount of time, but they do benefit from their experience by leveling up over time. Additional troops can be hired for silver – a lot of silver for the best units. But while it may take a ton of gameplay to save up for the good stuff, that’s at least an option, and a fair way to implement a freemium model. Earning enough Favour with your nation of choice reduces the hiring costs and can lower Brigade recovery time as well. 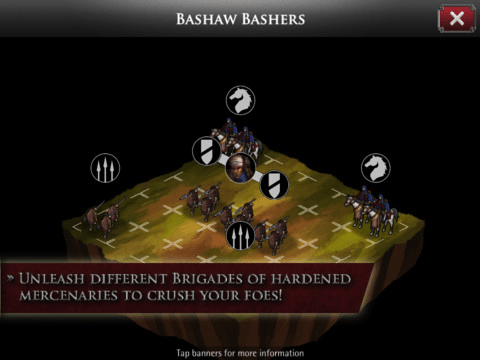 On the multiplayer front, this is a game that was basically made for asynchronous play. Some of the App Store reviews have complained of the three-day period of inactivity necessary for an inactive opponent to forfeit, but that’s going to be a part of any title with this feature. It’s really simple to cue up a battle and play at your own pace, and that’s aces in my book.

There’s nothing particularly jaw-dropping about the graphics or soundtrack, which are both nice enough. What is impressive is the incredible amount of detail given to each individual unit, fleshed out via vivid text descriptions. They add up to an unusual amount of lore for a strategy game, but they’re also easily skipped if you’d rather get to battling.

It’s hard to stop playing Ravenmark: Mercenaries once you get started, which is probably the highest form of praise that a strategy game can get. It’s fun to play solo or against other people, and it’s almost certain to have you plotting strategies even when you’re away from your phone or tablet.