Rat On A Skateboard Review 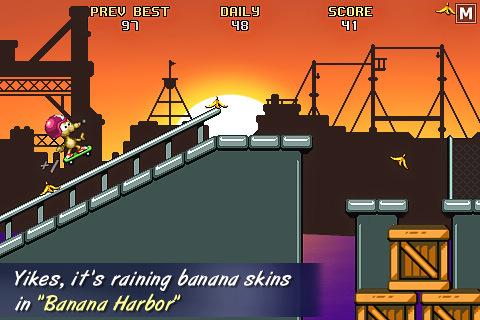 The first iPhone game that really got me addicted was Rat on a Scooter XL. It was among the earliest distance-scoring games on the App Store that I can recall, and had great personality. Ratty’s back in Rat on a Skateboard, along with a few new tricks. I’m sure that this one’s going to stay on my iPhone for a while too.

The premise is the same as ever. Guide Ratty on his skateboard through Banana Harbor, doing flips, trips and grinds without colliding into obstacles or falling off the screen. No story is necessary. I mean, just look at Ratty! He’s so cute; you wouldn’t care that he could potentially infect you with a communicable disease. He’s just that appealing.

So what does Rat on a Skateboard bring that Rat on a Scooter doesn’t? New gameplay modes and tricks. Rat on a Scooter was all about just staying alive, picking up points for a few tricks and bits of cheese. Here, tricks play as much of a role – if not more – than the fromage of yore. For example, while all the other tricks from the first game are here (grinds, wheelies, front and rear grinds), you can now go for flips of the board by tapping as many times as you can while mid-air. The tricks are also easier to understand, with graphical cues like dotted lines to see how long your grind is. Everything feels tighter in Rat on a Skateboard than before.

The modes themselves are all different, too. There’s a main Power Stunts mode, which is just getting as far as possible. But more fun – and challenge! – can be had in the Banana Harbor mode. Here, not only are you trying to navigate the obstacles and score points like in Power Stunts, but a myriad of banana peels fly at you from the background, landing randomly in front of you and making things more dynamic and frenzied. Somehow, a banana never landed in a way resulting in a cheap death. That alone makes this mode amazing; it could have gone horribly wrong, but instead was implemented beautifully.

Finally, there’s a 40-level Challenge mode. These short obstacle courses challenge you to earn a set number of points before reaching the finish line by performing stunts and nailing jumps on specific objects. Score high enough and you’ll receive a three-star rating. The designs are really great, and the difficulty curve is just right. It’s tough to get three stars on everything the first try, but the one-star bar is low enough that the most novice of players can see all the mode has to offer. 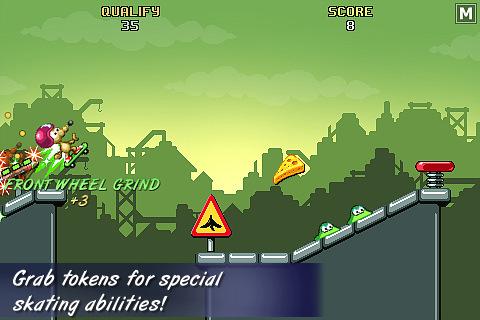 All of this is wrapped up in the same high-quality cute graphics and sound that Donut Games is known for. Ratty is just as cute as ever. Other than “WIEEEEE” when you fall – I’m not sure what word they were going for here – everything just feels polished and tight.

The only knock against Rat on a Skateboard is that the core game experience remains the same as before. Certainly the new modes help – particularly the challenge modes – and the new trick system adds new flavors, but one has to begin to wonder what other innovations could have been made to make the gameplay that could have made it that much more dynamic.