Rat on a Scooter XL Review 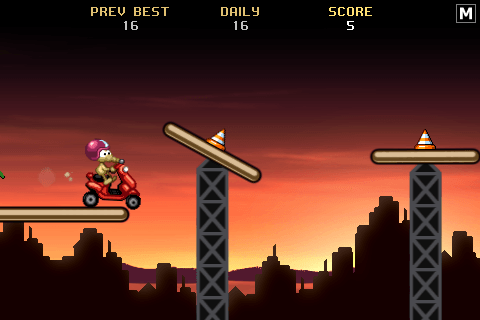 Sometimes the name of a game alone is enough to put you in a good mood and prepare you for what you’re about to play. Never has this been more apt than Rat on a Scooter XL, which is as silly and fun as you think it ought to be.

Originally an extra mode in Donut Games’ previous rodential expedition Rat on the Run, Rat on a Scooter expands on this mode – hence the XL – and features an adorable cartoon rat in a cute red helmet out for a ride on his scooter. The game has three modes: Super Cheese XL (putter along and collect bits of cheese to rack up a high score), Fuel Depot (an endurance mode where you collect cans of gas to keep your fuel gauge from going empty) and Skill Course (where you lose points by touching traffic cones strewn along the course).

The whole point of Rat on a Scooter is to get a solid high score, post it on the worldwide leaderboard and feel good about preventing Ratty from going Boom Crash (the adorable way the game says you fell off the course). Controlling Ratty is as simple as tapping the screen. The longer you tap the screen, the further he’ll jump. Ratty can also do a double-jump by tapping the screen anytime during the first jump. As Ratty gets deeper into a level, he travels faster, making it harder to stay on the rails.

Whatever mode you play, Ratty can earn extra points by performing some nifty tricks like grinding along a rail with either only the front or rear tire. Maintaining forward momentum on a single tire also nets you bonus points.

Each mode presents its own unique challenges, and how much extra stuntwork you want to risk while getting that high score. Super Cheese XL is the mode most people will begin playing at first. Small and large bits of cheese – worth one and three points respectively – are strewn along the course. Just keep collecting and moving forward for as long as you can. Fuel Depot has Ratty starting out at a slower speed, but will run out of fuel quickly if the gas icons aren’t collected. Skill Course is basically Super Cheese XL, but you raise flags for five points each instead of collecting bits of cheese. You can also have your score drop should you come into contact with a pylon.

That’s about it, really.

However, the real fun comes when the level starts to go faster and you have to balance risk with reward. Super Cheese XL has this all the time. Do you go for the big cheese or the big grind? But if you grind will you have enough momentum to make it to the next jump? Or if you do go for the piece of cheese near the bottom of the screen will you just careen off the edge? Fuel Depot is even more interesting as the pace that Ratty moves is different than the other modes, forcing you to rethink your timing. Also, that fuel gauge drops awful fast. The simplicity of the gameplay mixed with the strategy of each mode makes for an addictive experience.

The simple fun in Rat on a Scooter XL is echoed by the simple but cute graphics. Ratty is absolutely adorable, and you really feel for him when he falls off the screen. The sound is nothing particularly special (save the cute sound effect when Ratty Crashes) but certainly doesn’t get in the way or get repetitive.

If Rat on a Scooter has any failings, it’s that the game isn’t particularly deep. The stunt list is awfully short, and more variety in the game modes would have been nice. But given the game’s low price point and platform, Rat on a Scooter XL is a fun, silly way to waste time. Besides, some of those leader scores are pretty darned impressive, and I know I can catch up to them after just one more game…