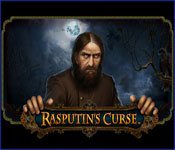 Mystical faith healer to some, manipulative charlatan to others, the Grigori Rasputin is the latest historical figure to get his own hidden object game in Rasputin’s Curse. Rasputin was said to have an unhealthy influence over the Russian royal family of Tsar Nicholas II, his wife Alexandra and their son, Prince Alexei. But rather than focusing on this famous family in the game, you’ll follow the modern-day quest of a woman named Lora as she traces her Russian ancestry back to the "Mad Monk" himself.

Lora’s marriage with her husband Mark is on the rocks, and she ends up travelling to the Russian city of St. Petersburg to research her family history – and try to discover the cause of the strange black-outs she keeps having in which Rasputin seems to be calling to her.

The story is mildly interesting but not half as interesting as the actual historical accounts of Rasputin’s colorful life. The plot is expressed – as best it can – through drab hand-drawn black and white still pictures that resemble unfinished concept sketches rather than fully-realized storybook panels.

Throughout the game your job will be to help Lora search for a variety of items in different locations. Typically these items are shown on a list on the right-hand side of the screen, but occasionally you’ll have to search for items by their silhouette, or complete the odd spot-the-difference challenge. If the mouse cursor changes color when you scroll over something, such as a cupboard or box, it means you can open it to reveal additional items inside. Sometimes items will be added to your inventory and can be used to help reach other things – such as using a ladder to reach something lodged in the branches of a tree.

The items that you’ll be searching for are more or less authentic to context of the scene. In doctor’s office, for example, you’ll search for things like a stethoscope, medical tape, cotton balls, and blood pressure monitor. Some tasks are fun, if a little tangential to the main story, such as finding a certain number of pears to bake a tart.

Rasputin’s Curse has pleasant-looking hidden object scenes – even if a few of the items are ridiculously small and difficult to find – but overall it’s simply nothing special. The "adventure" aspects of the game, where you have to use inventory items, are clumsily realized and seem tacked on. Instructions like "find a way into the tea cabinet" are just too vague when you’re faced with a typically cluttered hidden object scene – as opposed to an adventure game scene where it’s usually fairly obvious what’s supposed to be clicked on and what isn’t.

The disappointing visuals in the cutscenes have already been addressed (however, they can be skipped), but another disappointment is the piano soundtrack. The music is elegant, but also downbeat and somewhat depressing. The game can be finished in 2-3 hours.

Sadly, much like another recent hidden object game based on a historical figure, Real Crimes: Jack the Ripper,  Rasputin’s Curse just isn’t terribly interesting or fun to play, and its famous subject matter isn’t enough to save it.