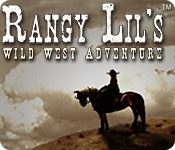 Rangy Lil is a tough-as-nails cowgirl who’s not afraid of anything – not even her ex-husband Bob, who conks her on the head one night and disappears into the hills with their two children. You don’t have to be a mother to know what comes next. She’ll need help from a few friends along the way, but nothing’s going to stop Lil from getting her kids back.

Rangy Lil’s Wild West Adventure is a hidden object game that puts you in Lil’s boots as she tracks her sleazo ex across the desert. The game does its best to remain authentic to the time period, which unfortunately winds up working against it. The covered wagons, teepees, and settler camps that you’ll search all look like they could’ve been genuine locations in the Old West, but they also suffer from an overwhelming feeling of sameness. A wagon wheel looks like a wagon wheel no matter what color you paint it, and there are only so many times you can search for rope before feeling a bit bored. As much as I appreciate not being asked to find a cell phone in a game with a historical setting, a little variety to the items would’ve been appreciated. Though the hidden objects themselves don’t change all that much, sometimes the game does make an effort to spice things up by breaking up an item, then asking you to find and reassemble the pieces.

Each scene has ten items for you to find; they’re usually pretty obvious, as are the two  horseshoes you need to collect to earn a hint. Requiring you to find more than one item in order to earn a new hint is a great idea, it’s just a shame that the game is so easy you’ll rarely need any help. You can also earn hints by completing puzzles between hidden object levels,  such as correctly arranging colored  tiles to reveal portions of a map, or spotting the differences between two images. Other mini-games are thrown in just for fun; Lil’s girls keep themselves entertained by playing Hangman and arranging barbed wire to pop a pattern of balloons.

The Old West setting is a fantastic choice, the perfect backdrop for a strong-willed woman like Lil. But between the yee-haw music that repeats far too much and dialogue awash in words like "lily-livered" and "varmint," it all feels horribly corny – like someone on the development team saw one too many Westerns growing up. The comic book-style panels that tell Lil’s story in between levels are drawn very well, but the writing doesn’t always quite seem to match up with it, making the plot feel oddly disjoined in places. The story ultimately doesn’t matter all that much – Lil’s mission to find her kids is crystal clear from the get-go, and you don’t need to know why you’re at a campsite to find the items hidden therein – but players who want to take the journey with Lil will be left somewhat confused.

Rangy Lil is by no means a bad HOG; in fact, it’s more polished and has far higher production values than a lot of its brethren. Perhaps that why it ends up being so disappointing. It has all the potential to be phenomenal, but ultimately falls just short.  If it was just a little more challenging, if the scenes had just a little more variety, if the writing was just a little bit better, then Rangy Lil really could’ve been outstanding, but instead, it’s just ordinary.