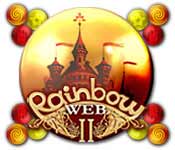 Puzzle fans, listen up. If you didn’t get around to playing though Sugar Games’ fun and challenging three-in-a-row game, Rainbow Web, then you should download the new Rainbow Web II, which offers more of the same and a couple of added twists.

Those who already played the original 2005 game might not find enough new features to justify the cost – but at least with casual games you can see for yourself by playing the trial demo.

In the Russian-made Rainbow Web II, players are once again plunged into the magical world of Rainbow Kingdom, where you must explore this idyllic wonderland with peaceful imagery of castles, streams and other fantasy settings – and “free” these serene scenes by destroying the evil spider’s web spread across them all. Not much has changed from the first game but the story is fleshed out more, with a new paragraph to read following each completed level.

The core game-play in Rainbow Web II is identical to the first game. Your goal is to align a minimum of three same-colored beads on spider webs to make them disappear. The catch is that you can only link same-colored beads if they’re connected by a vertical or horizontal web string; as levels increase, some of these strings on the Web begin to disappear, making it more difficult to align beads together. To make matters more difficult, new bead colors are introduced over time, such as orange and purple. Black beads cannot be swapped, and can only be removed by reaching the edge or center of the web.

Players must also spell words to finish the level. That is, some of the colored beads have letters on them, so you must align three or more same-colored beads with a letter on one or two of them, which helps the spell words, such as “A crystal chandelier,” “The Pool of Desires” or “The Palace Stairway.”

After a long while, the shape of the board changes from a spider web to a more rectangular grid, which is a refreshing change, and introduces new strategies for the gamers to employ. It’ll change back to the web again after a few levels.

The high-resolution graphics and melodic music soundtrack help whisk the player away to this fantasy world.

What is new in Rainbow Web II, however, are two kinds of mini-games spread throughout the game. One is a sliding tile puzzle, where players can click on two squares in the scene to swap them. If one or both of these are correct, they’re locked into place, so you know you can move onto other pieces. Upon completion of this puzzle you’ll be rewarded with something relevant to the scenery, such as a key that opens a new room or a kitchen pot, magic horn, and so forth. The second mini-game is a kind of hidden-object game, where you must build an object like an ancient vase, by finding scattered pieces of it hidden in the level. Once you find all the pieces, the mini-game is over and you go back to the spider web game.

Don’t get me wrong, mini-games are a nice break, but they’re not very challenging at all. In fact, you can finish these in about 10 or 15 seconds – and that’s not an exaggeration.

Curse of the Pharaoh: The Quest for Nefertiti Review