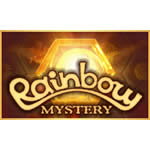 Match-three games are a dime a dozen these days. Well, actually, they’re still twenty bucks. But, there are a slew of them. What makes one better than another? It’s the “twist” employed to the tried-and-true formula we’ve come to know and love.

In Rainbow Mystery, that twist involves a story about flowers and the manner in which blossoming combos are fashioned.

Enter Lily, a woman on a quest. Shrouded in a tale of mystery and magic, this young flower fairy must break a curse that has settled upon her village. Your mission is to help her sets things right by solving the land’s 70 plus puzzles while collecting 14 magical trophies along the way.

A swap-and-match puzzler, Rainbow Mystery offers three different modes, Relax, Classic and Duel, that all follow the game’s story. Relax and Classic are identical except the latter is timed. Both take you through the game’s puzzles from start to finish, but you decide the pace of your adventure — a thoughtful design feature. Looking for something a bit different? Duel pits you against an unseen magician. In this mode, you’re challenged to compete with the game’s AI (artificial intelligence) while alternating turns.

What’s the goal? Well, in Rainbow Mystery, the curse is broken by solving its puzzles — swapping flowers to create matches of three or more of the exact same blossom. When you do, the blooms explode and add to your score, others descending to fill their places. The more flowers you detonate at once, the greater your tally. However, there’s a catch. Combos must form a straight line; adjoining flowers don’t count. You can double or triple your score by creating multiple simultaneous matches, but each must form a line. An animated “How to Play” feature explains the process and identifies how scores are determined.

An additional challenge comes into play via colored cells in which some flowers rest. These cells are ingredients in the elixir needed to break the curse. To add them to your restorative pharmacon, you create a floral combo of the same color as the cell it includes. Clear the flowers and the ingredient is added. Once all ingredients have been combined, the concoction is complete along with the current puzzle. Thus, your high-score strategy should be to detonate as many flowers as possible before freeing the final cell. And, before running out of time if playing Classic Mode.

That’s not all, as two variations present themselves on many puzzles. Some, for instance, include an artifact, also referred to as a trophy. In addition to the usual swap-and-match action, you must maneuver the artifact to the bottom of the puzzle by creating matches beneath it. You’ll also come across ingredient cells that are locked. Before you can free them, you’ll have to match the flower locked within. Once unlocked, you can create the same-color matches required to free these cells.

Although easier than average for a match-three game, this botanical puzzler is a relaxing addiction for fans of the genre. Visual and aural elements are suitable to the task and enhance its predominantly unhurried atmosphere. And, while it lacks award-winning style, the story does tie the puzzles together nicely. It all adds up to many hours of laidback, floral-arranging pleasure.

There are, however, a few spots where the fairy dust is sprinkled thin in this swap-and-match game. While fun in its current form, the ability to compete against another “real” person via mouseplay (two mice, one PC), rather than just the computer, would enhance Dual mode. It’s not a big negative, but would have been a really cool add-on nonetheless.

Rainbow Mystery’s biggest bugaboos, however, are inconsistent graphic quality and a lack of power-ups. While the game’s 3D elements, puzzle grids and special visual effects are attractively rendered, 2D graphics and animations lack equal luster and appear amateurish. More significant, though, power-ups are conspicuous by their absence. Trophies are provided as collectables, but they’re window dressing only. Power-ups, artifacts that affect gameplay, are completely lacking.

Still, the sum of Rainbow Mystery is greater than its individual parts. Although not at the top of its class, it’s a fun diversion anyway, and does far more right than wrong. If you prefer a relaxed experience to a vigorous challenge, this match-three-or-more offering is a breath of fresh air. You certainly don’t need a green thumb to enjoy its mystical flower-matching fun.