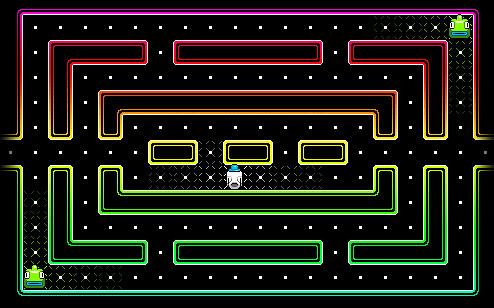 30 years on, developers are still trying to better Pac-Man… and failing

Nitrome games tend to be rather hit or miss depending on the genre, mechanic or past game they’re currently trying to riff off of. The fact of the matter is that building your own take on a tired concept usually ends up still being rather yawn-worthy, no matter how many whistles and bells you tack on it.

Case in point: Rainbogeddon is essentially Pac-Man with power-ups and flashing lights. Even if you find you’re appreciating the little bits and bobs that Nitrome has carefully injected into the original maze-running idea, it still essentially boils down to the very same gameplay which was fun 30 years ago, but is rather old hat now.

Rainbogeddon sees you darting around a variety of multi-colored mazes, dodging enemies, eating pills and using power-ups to their fullest. Eat all the pills and you’ll be able to progress to the next level, where you’ll be asked to eat more pills. We really don’t need to explain it further, as we’re pretty sure you get the idea.

As with all of Nitrome’s releases, it’s vibrant and energetic, and definitely gives off its own sense of belonging rather than feeling like a rip-off or a clone. The neon lights coupled with the very strange characters models make this a color explosion in your browser, and the gameplay does its best to thrive off of that.

The game attempts to throw enough spanners into the Pac-Man works to keep the gameplay fresh. A variety of power-ups can be used to fend off your attackers, such as bombs and drills – in fact, it’s necessary to pick up items sometimes, as certain mazes will have areas that you cannot reach without them. It’s an interesting idea, and one that we cannot fault – a welcome addition to the formula.

Kill a baddie using a power-up, and all the pills will be worth more points, while picking up one type of power-up multiple times will cause it to level up and be more powerful. Little curveballs such as these here and there make Rainbogeddon a little bit more of a thinker than you average pill-chomper.

Unfortunately, you’ll most likely have gotten over all of this within 15 minutes or so, and you’ll quickly come to the conclusion that you really are playing the same game that you’ve played millions of times. 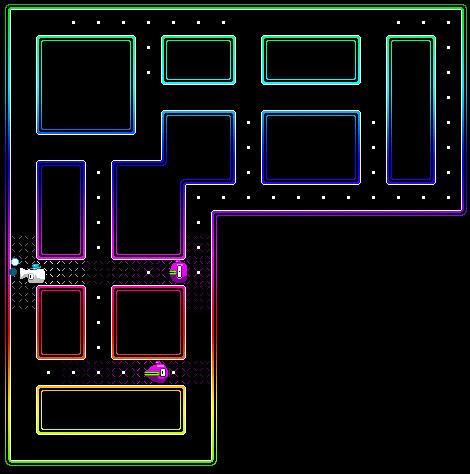 When you really get down to it, Rainbogeddon is far too similar to Pac-Man, and doesn’t add enough to position itself as a worthy adversary. The gameplay becomes full and repetitive, and, well, you’re eating dots in a maze. That may have been fun decades ago, but video games have evolved now. Besides, Pac-Man has evolved multiple times over now into something far better than either its original or this latest Nitrome release – just see Pacman Championship Edition DX for proof of that.

In fact, Rainbogeddon actually ends up destroying some of the key fundamentals that made Pac-Man what it is. For example, some enemies in Rainbogeddon will change direction partway through a line, which is simply blasphemous. It feels cheap and entirely unfair, and shows exactly why Pac-Man wouldn’t have stood for such cheek.

Rainbogeddon is a Pac-Man wannabe that simply cannot stand up to the good old-fashioned simplicity of a 30-year-old game. At the most, you’ll get a short lunch break’s worth of fun out of it, but we doubt you’ll want to pursue it any longer than that.