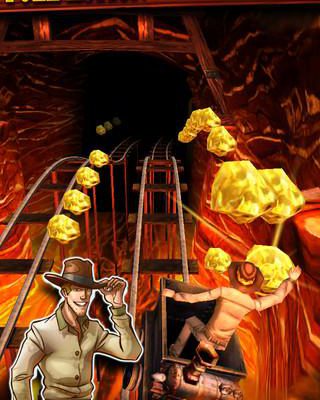 The endless runner: #1 on the list of “game genres I never want to recreate in real life.”  Thanks to Temple Run‘s disarming level of popularity, players can now enjoy this nightmarish genre in almost any setting imaginable, from the cookie-cutter (literally) Ginger Run to the high espionage of Agent Dash.  Miniclip’s latest release, Rail Rush, sends us to an underground mine where gold, lava, and three infinitely long sets of railroad tracks await.

Rail Rush drops you straight into your cart, where after a brief explanation of controls, you’re off and rolling.  Anyone familiar with Temple Run won’t be surprised by the swipe controls for jumping over low obstacles and ducking under hanging obstructions.  Tilting allows you to dodge left and right-specific blockades, while flicking left or right changes your current track—a necessary skill to avoid track-wide dead-ends.  Along your increasingly dangerous journey, you’ll also tilt to lean out of the cart and collect gold nuggets and precious gemstones.  (Your cart is, thankfully, unable to tilt off the rails, for those who have tilted themselves to death in other runners.)

Those not-so-hard-to-reach gems can be used to purchase cart upgrades, useable items, and additional characters.  Upgrades, such as the wood ram or iron grid, bash and nullify obstacles specific to their location (rams on the bottom, grids on top).  Although these items have limited uses—wood breaks after one hit, iron after two—they will remain attached to your cart until used.  So Mr. Magoo-eyed spelunkers like myself, who fall into open pits more than run into obstacles, will not find their money immediately wasted.  The bonus characters provide not only a different avatar to shuttle through the underground, but also character-specific abilities that enhance the actual gameplay.  “Axel Firechief” uses his axe to break upper obstacles, while “Daryl Plankbuster” and “Charles Longshot” are able to shoot left and right obstacles, respectively.

In a genre that’s the video game equivalent of Groundhog Day, these in-game extras make all the difference. The bonuses you can purchase, earn, or discover determine whether your next run-through is an exciting new adventure, or merely a mocking repeat of yesterday.  Luckily, Miniclip seems acutely aware of this and has stockpiled Rail Rush with both useful attainables and in-game variety.

Three different “Missions” are always available, which are challenges completed by achieving goals—such as jumping a certain number of times or tilting for a specified distance—that allow you to level up and earn extra gold.  When a mission is complete, it’s replaced by a new one of varying difficulty.  “Rock eggs,” a unique item sometimes found along the track, can be cracked open after a run for a potential power-up.  They may award bonuses for your next run (such as double gems or no wooden obstacles for a certain length of track), extra nuggets (the most I’ve received is 1,000 gold), or nothing at all.  They are a gamble, as unbroken eggs are worth 50 gold outright, but the excitement of a potentially huge pay-off is too great to pass up.

When actually playing and not just shopping or breaking eggs, you’ll be treated to breathtaking environments and six different “areas” to explore.  Your never-ending rails pass through a mine shaft, underground river, catacomb, mushroom hall, and spider’s nest, each with their own atmosphere and music.  The spider’s nest is legitimately creepy, making me paranoid that a giant arachnid is chasing me Limbo-style, while the underground river soothes and quells those fears. 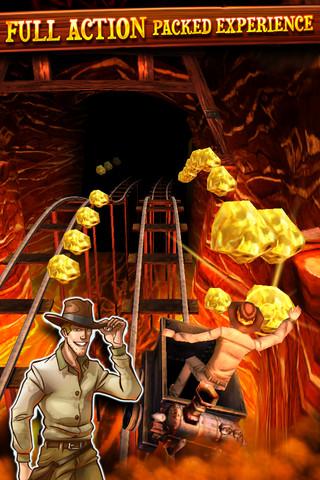 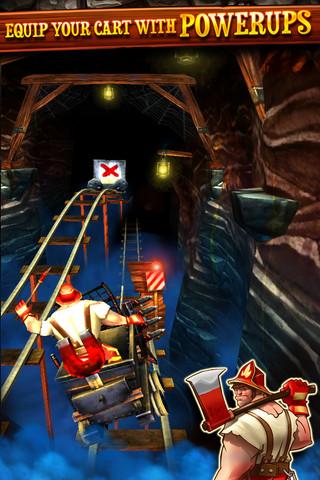 The sixth locale is the game’s “secret” area, and one of its best features:  the daring and observant adventurer may notice the tracks sometimes veer off into a subtly glowing wall.  Taking this path (often hidden behind one last-minute obstacle) will lead you to a lava pit offshoot.  This dream factory features 200 meters of uninterrupted track, with nothing but gold nuggets and jewels on either side; a worthy reward for anyone with the focus and skills to reach it, as well as an easy way to save up for more useful purchases.

Of course, not everything is warm and fuzzy like the lava pit.  Rail Rush suffers from a significant difficulty imbalance: the first 500 meters of track offer no challenge other than staying awake, while 2,000+ meters is a panic-inducing ride from hell.  On my best run, I hit 2,612 meters and immediately had a heart attack.  Although you can bypass the 500 meter snoozefest with expendable items like the TNT stick, there’s no solution for the insane difficulty jump at 2,000 meters except good old fashioned practice.  The missions are also a wasted potential, as most require activities that will be completed automatically through enough play (turn the game on 10 times, or tilt right for 4500 meters), or even force you to purchase items you might not otherwise (with in-game currency).

These issues, however, are ultimately minor when pitted against the sheer fun of the game itself.  Rail Rush is a blast to play, and the first endless runner that has threatened Temple Run‘s placement in my favorite games folder.  The winner?  I’ll let the evil monkeys and giant spiders battle it out; I’m too busy playing.