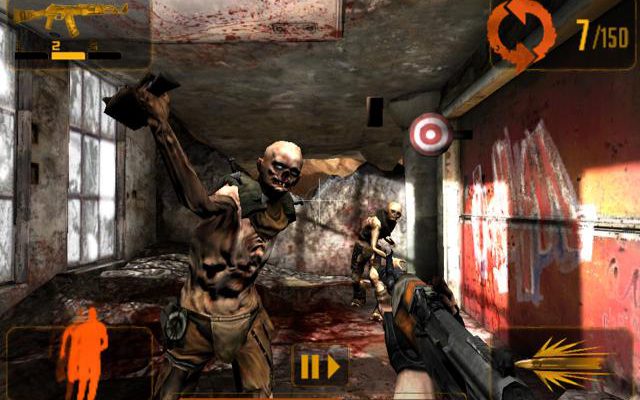 While the iPhone has seen its share of shooters, few have been crafted by the masters of the genre. Having created both Wolfenstein 3D and Doom, ID Software is certainly a developer that can lay claim to that title. With RAGE, we’re happy to report that they’re doing what they do best; creating unholy monstrosities for gamers to take apart with a shotgun.

The first entry in a larger series set to debut on consoles and computers next fall, RAGE offers a bite-sized taste of the post-apocalyptic world to come. Available as two separate purchases depending on your device (RAGE for earlier iOS devices, RAGE HD for iPhone 4, iPad, and iPod Touch 4), RAGE places you in the role of a survivor from the wastelands who is competing on the game show ‘Mutant Bash TV.’ The object of the show is to complete ‘episodes’ in which you slaughter mutants and try to gather up cash along the way. 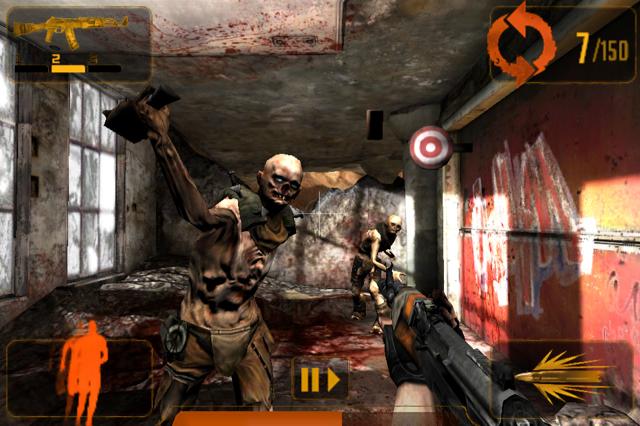 Without going hands on, it’s easy to be misled into believing that the iOS version of RAGE is a traditional first-person shooter like its forthcoming counterparts. Instead, this early portable version of the game is an on-rails shooter. This means that players will be in control of aiming and firing, but not movement. The game will automatically move you from one room to another once you’ve cleared an area of hostile mutant scum.

That mutant scum are an ugly bunch. Really ugly. We’re talking deformed/undead ugly. The kind of stuff that gives you nightmares. Unholy beasts of this sort are the type of thing that ID does best, but they’re also the sort of thing that will make the more squeamish amongst us want to steer clear of this release. RAGE is a lot of things, but family friendly and “pleasant” aren’t amongst those. If you’re looking to jump into the fun, be prepared for all of the blood, violence, and unthinkable creatures that come with it. iPhone games aren’t rated by the ESRB, but if they were, we’d expect to see a big ‘M for Mature’ on this one.

The controls here are fairly sharp, and if you have an iPhone 4 they make excellent use of the gyroscope. You’ll be able to move your device around to aim, and once you have a mutant in your sights you simply tap an on-screen button to shoot. Other buttons, located conveniently in each corner of the screen, allow you to reload, change weapons, and dodge projectiles that have been thrown your way. 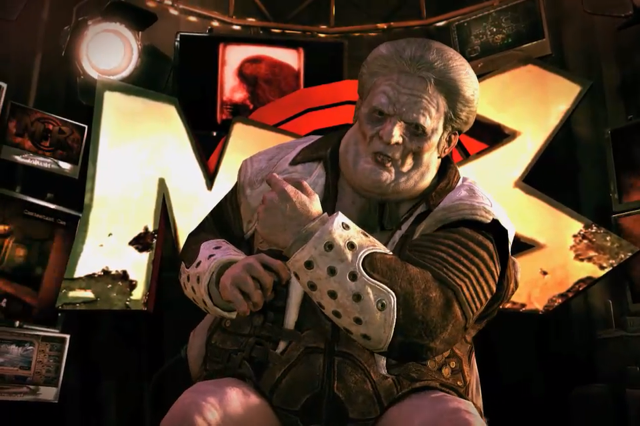 If you really, truly hate tilt controls, there is also a touch control option you can select – but having played with both, we’d really recommend sticking with tilt. Trying to control your aim with one finger while darting around the four buttons with the other requires the patience of a saint.

RAGE throws a variety of different mutants at you, each with their own quirks to learn. Some, for example, will keep their distance and throw bricks at your head. Others will leap across the room to attack. Others yet will run up to you and unleash a barrage of attacks until you dodge them. Each room full of mutants you face will offer a different combination of these baddies, so you’re always kept on your toes.

To do battle with these enemies you’ll have a shotgun, machine gun, and pistol at your disposal. It’s not a huge artillery, and you can’t upgrade the guns or swap them out for similar alternatives, but RAGE manages to make good use of what they give you. Different mutants can be handled best with different weapons. While the pistol has infinite ammo, the better weapons are fairly limited in bullets and leave you on the constant search for more. In an interesting twist, the guns can do double damage if you reload at just the right time, giving you yet another thing to focus on in the midst of a mutant attack. It may only be three guns, but ID clearly knows how to use them in a way that doesn’t leave you longing for more. 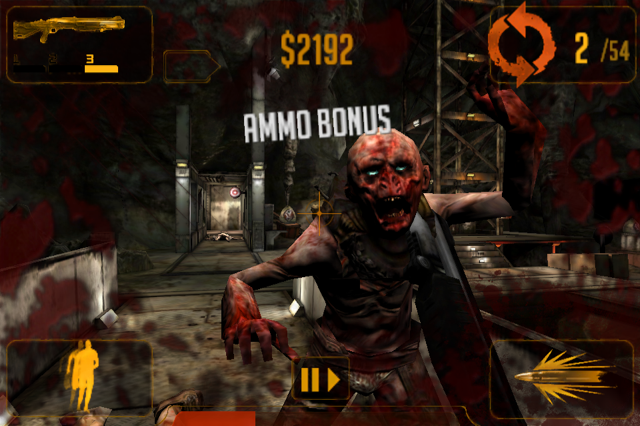 As gory as the content is, there’s no denying that this is the best looking iPhone game to date. ‘Best looking iPhone game’ is a title that may quickly be usurped with the impending release of Infinity Blade, but even so, it’s almost impossible to believe this is running on the same hardware that typically powers simple 2D fare like Angry Birds. RAGE is an outstanding showcase for what this little device can do in terms of graphics. It’s the sort of thing where – even if the game were unplayably bad – we’d still tell people it’s worth a look simply for the astonishing presentation. And that’s not the sort of recommendation we’d make lightly.

Thankfully RAGE isn’t unplayable. In fact it’s quite good. We’re not talking about award-winning originality here, but the on-rails shooting is tight, fast, and fun enough to be well worth the price of admission. While the game only offers three different levels, each has four different difficulty modes, letter rankings, and a score that you’ll keep coming back to improve. We would have liked to see the mutant placement be randomized rather than persistent, but so long as you’re willing to move up and down the difficulty levels, you should have no problem finding a challenge on your next play through.

We’d tell you to play it for the visuals alone, but RAGE has enough fun to make this worth your while no matter what the graphics look like. It’s definitely not for the faint of heart, but if you can stomach the ultra-violence, scary monsters, and gory killings, RAGE is an experience that’s well worth your time.