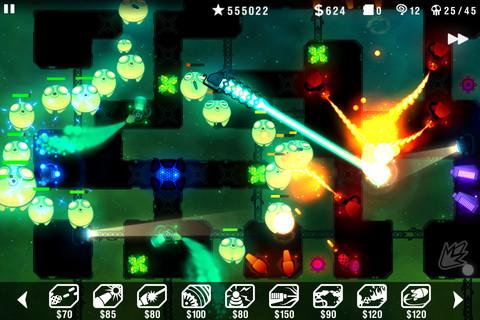 Radiant Defense succeeds at lighting up a tired genre

If a tower defense game is released on the App Store and no one downloads it, can people please stop making them? There are few genres with a more crowded field of competition than tower defense. Despite this, developer Hexage.net has decided to emerge from the shadows with a TD title of their very own. It turns out to be quite fitting that their offering has the word “Radiant” in the title, because Radiant Defense is here to bring new light to the bottomless tower defense pit.

The first thing you’ll probably notice about Radiant Defense is how gorgeous the game is. Everything from the title screen to the final mission has a uniquely glowing look what paints unbelievably vivid colors on the screen. The game has a pretty simple design, overall–it’s not going to overwhelm you with graphical prowess or push the processor speed of your iOS device, but it’s beautifully designed.

The friendly, vibrant look of the game can be deceiving, so don’t let it fool you: this game is hell. The challenge that Radiant Defense provides is unmatched in tower defense titles. Your abilities are well-tested within the first few tutorials, and the game is pretty unrelenting. It’s potentially too hard, but it makes those victories that much more rewarding.

One of the features that makes the game a little more lenient actually increases the difficulty some: an auto-save after every wave of aliens. While this seems nice at first as it drops you right back into the action without wasting any previous efforts, it also makes you accountable for mistakes made several waves ago that you can’t go back and fix. It’s as unforgiving as it is helpful.

There are no shortage of spots where you need saving: over 300 waves of aliens attempt to pass through, with only you and the nine upgradeable weapons at your disposal to stop them. If that’s not enough, you can call in one of three super weapons–but you want to use those wisely and sparingly.

Along with the weapons, which you upgrade constantly–the game really sets out to punish people that plan on idling –you’re also able to modify the path that aliens travel down between rounds. It’s helpful when attempting to set up specific traps and weapons caches, but once a wave makes it through and starts using your path against you, you feel especially screwed because you set the whole thing up.

Aside from the stunning visuals, you also land a flawlessly composed soundtrack from the mind of Kubatko. There are plenty of in-app purchases available in this free game, but if there is anything worth buying on its own from this title, it’s the soundtrack. Get this on iTunes and let me give you my money, Hexage.net. 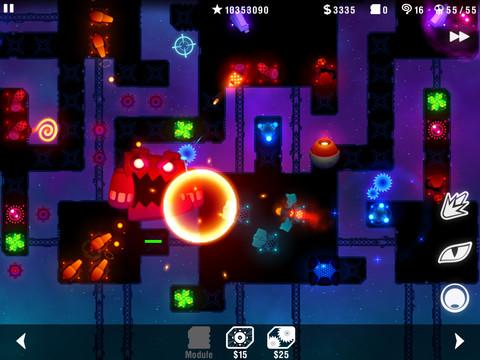 Otherwise, in-app purchases may be the only downfall of this title. While the game itself costs you nothing, there are towers that are accessible only to people willing to shell out money for in-app buys. It’s rough for those that don’t want to spend money for the packs and just want to hang onto the free title, because they’re missing out on some solid content. Luckily, the packs don’t exceed $0.99 and there’s only four of them. Frankly, I’d have paid the $3.96 up front for the game.

Radiant Defense is still a tower defense game, but it’s a really good one. Your iOS device is no doubt already packed with games in this genre, but you’ll start clearing them out once you have this title. There’s little that is extremely unique about Radian Defense‘s actual gameplay, but it’s a challenge that gives a feeling of accomplishment with each level. Get this game and start fending off the brilliantly bright waves of invaders that come your way.