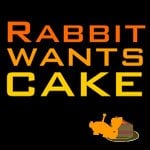 Rabbit sure wants that cake, and who can blame him? As a robotic rabbit, he'll need you to help him reach that delectable desert. But you won't be guiding this little bunny first hand — instead you'll need to map out his route for him, telling him which way to go and when. Can you record the right moves into the robot rabbits programming to help him get that yummy cake?

Rabbit Wants Cake offers a unique take on the classic puzzle platform formula. Rather than controlling the character directly, you'll have to “record” moves for him to try on his own. Doing this consists of holding down one of three control options for select periods of time; left, right, and jump. If you start on the left side of the room and there's a small obstacle in the center of the room, you'll want to hold down the right key while recording and make sure to include a jump in the middle. Once you've stopped recording you'll “playback” your move set and watch your robot in action.

Getting which moves to use when down right may seem like a real challenge at first, but you'll quickly be able to grasp the rabbit's average speed and begin timing things out in your head. Your directions are tweakable once recorded, which means you'll be able to try and perfect your programming without having to start over with a re-record every time. You can make moves longer or shorter, as well as move them to different earlier or later parts of the “program.” The only thing you can't do once you've recorded is add more moves. For that, you'll need to start the level fresh.

The ability to tweak moves definitely reduces a lot of frustration, but it can also make it a little too easy to cheat the system. By the end of the game I found it to be far easier to record more jumps and directional changes than I would possibly need simply so I could have them at my disposal for tweaking should they prove handy. Once you've done that, the game is a cakewalk (pun intended) so long as you have the patience to get the tweaking down.

Still, even with those sneaky tricks up my sleeve, it would take me a bit of time to get some of the later levels just right. The level design was well thought out, so it's a shame there were only 25 levels. By the end of the game it felt like you were catching glimpses of the neat mechanics that were to come, but there simply wasn't any more game to be had.

In terms of presentation the visuals seemed to be intentionally minimalist, but that didn't stop them from being underwhelming. Some games can pull off that “it's hip to be simple” look, but it just came off as unpolished here. The design on the rabbit had a lot of personality but everything else was just sub-par.

The music certainly helped to bump the presentation up a notch by delivering a cool mambo beat. It sounds like every Antonio Banderas movie worth watching, and we mean that in a good way. It's too bad there was only one track looped over and over. Again the game offered something we liked, but there just wasn't enough of it.

Rabbit Wants Cake definitely wins points in our book for offering outstanding and unique gameplay in the puzzle platform genre. Our only real complaint is that there wasn't more of it. The game left us wanting more, but not in a good way. With a little more polish, a few more levels and a deeper soundtrack to build the atmosphere, Rabbit Wants Cake could become the next big web game that everybody's playing. But with only 25 levels, the experience is over just as soon as it starts.