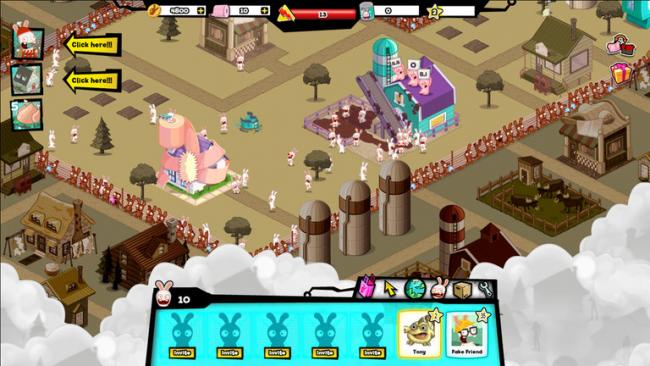 Forget city construction: Rabbids Invasion is all about city destruction

Though it’s been sad to see Rayman take a backseat over the years in his own franchise, the birth of the Rabbid games has been rich with rewards. Ubisoft has struck gold with their new brand of humor, and it’s given these crazy creatures license to do just about anything they want in the world of gaming. Rabbids Invasion sees the critters now invading the social scene, and once again they make “crazy” hip and hilarious.

Rabbids Invasion is, for all intents and purposes, Cityville–but in reverse. Rather than erect a civilization from the ground up, it’s your job to wreck what’s already here. Homes, public establishments and farms are all fair game, and rather than farm typical crops, you’ll need to plant roasted chickens, cupcakes and other ridiculous goods in order to fuel the Rabbid invasion.

Like other games of its breed, missions in Rabbids Invasion line up on the left-hand side of the screen, and during the early portions of your conquest, the main focus is learning the basics. The game does a bang-up job bringing you quickly up to speed and making the tutorial process fun and entertaining.

From the outset, planet Earth is a dull place full of browns and grays. It’s quickly evident that your main goal in the grand Rabbid scheme of things is to make the place pop. Once invaded, a lifeless cabin will turn into an outback party full of Rabbids roasting marshmallows and singing campfire songs. Trees turn into lollipops, and city squares become hotbeds for endless Rabbid shenanigans.

In spite of its crazy presentation and missions that call for players to break the fourth wall, Rabbids Invasion feels completely familiar. Toilet paper takes the place of city cash, but energy, gold, and goods all serve essentially the same functions as they do in a typical city sim. Rabbids Invasion spruces up the formula in fresh and delightful ways without tinkering too much with the fundamentals that have worked well in the past. 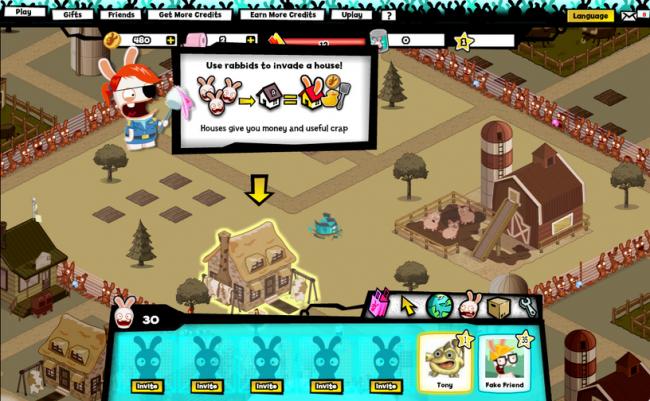 The game also benefits from an excellent presentation that has variety and creativity to spare. What the Rabbids bring to a party is a ton of fun and flavor, though the engine itself could use a few tweaks in terms of optimization. In spite of pushing simple 2D sprites that aren’t overly detailed, Rabbids Invasion lags a good bit. It’s the only real criticism I could levy against the game, as the rest of the production values are otherwise top-shelf.

If you’re in the market for more city management within the social space, Rabbids Invasion is one of the more delightful offerings to come along in recent months. It turns the Cityville formula on its head and makes a riotous mockery of Facebook norms. Whether you’re a fan of Ubisoft’s new Rabbids franchise or just a fan of twisted humor, Rabbids Invasion is a revolution you’ll want to be a part of.