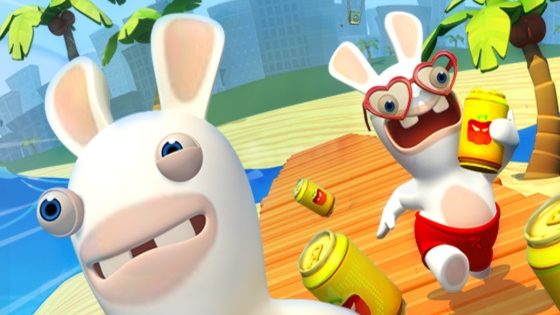 Rabbid crashes are fun. So fun it's easy to find yourself instigating them on purpose.

So many levels you're looking at weeks of fun rather than hours.

Thus, if you’re a fan of Minion Rush, you’re likely to experience some serious déjà vu — but you’re also likely to enjoy Rabbids Crazy Rush because the game offers more of what you already love. Plus, you’ll feel like a pro from the start. And alternatively, if you love runners but avoided Minion Rush because the ubiquitous yellow banana-munching aliens drive you round the bend, Rabbids Crazy Rush could be the best runner you’ll ever try. 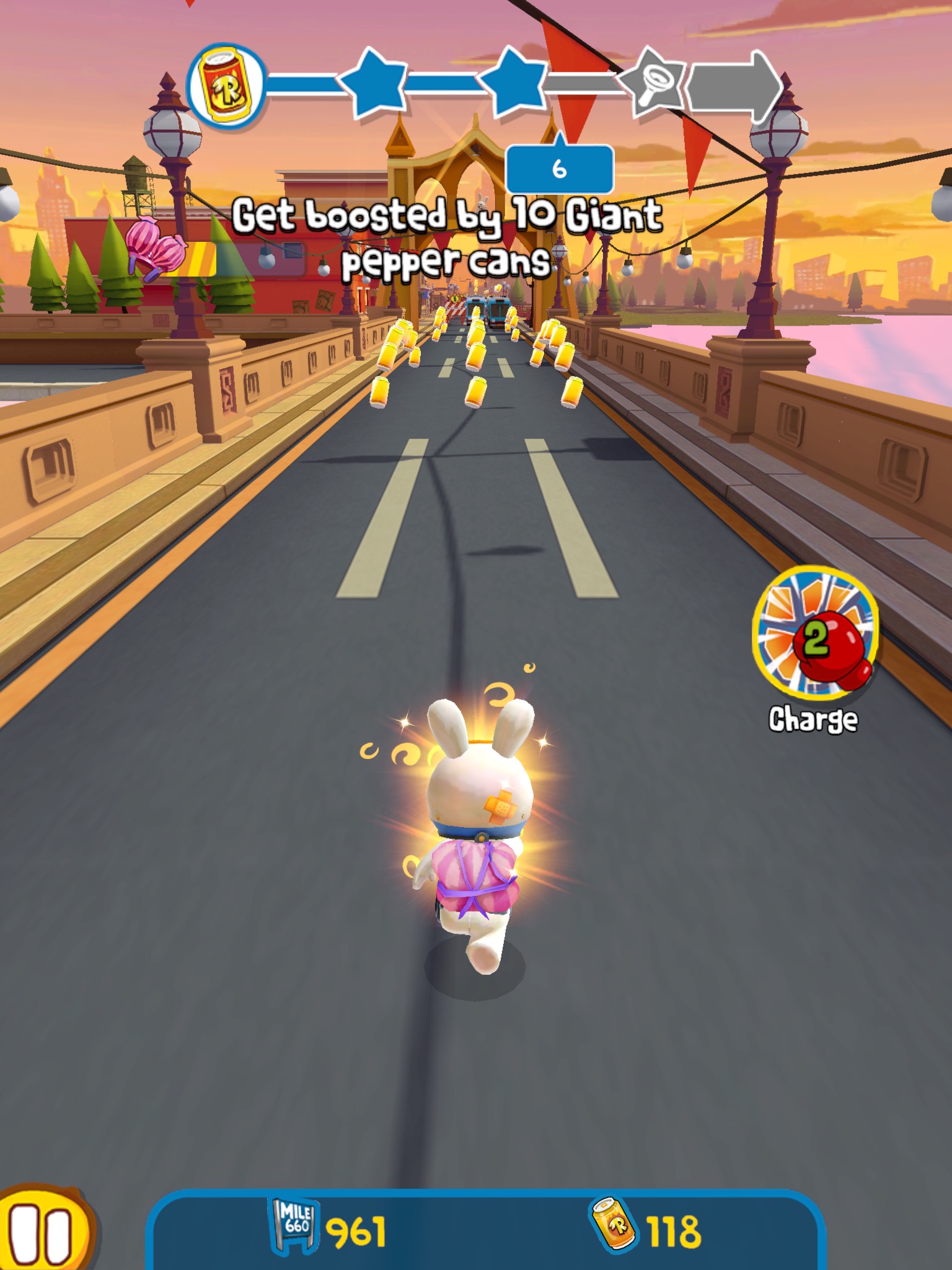 Leaving the comparisons behind, Rabbids Crazy Rush is an addictive leveled runner, with each level requiring you to complete a set challenge. While the specifics of the challenge are unique to the level, challenges tend to take one of five forms: overall distance traveled, number of pepper cans collected, collection of special objects, use of a vehicle (ex. a glider, jacked-up shopping cart), number of air blasts/ducks. The longer you run the faster you go, and the harder it is to stay alive.

Successful completion of each level nets you one, two or three stars depending on your performance, which are collected and used to unlock additional sections of the game. Reaching a designated star level at the end of the run will also earn you a plunger (or plungers) which can be used as a revive when in trouble. The runs themselves, at least in the early sections, aren’t very long, so it’s best to save up your plungers for when you’re three minutes into a higher-level run and stand a chance of completing it — although the temptation can be great to just power through the early levels. Plungers can also be converted into cans, which in turn can be used to upgrade special vehicles. Additional plungers are available as in-app purchases. 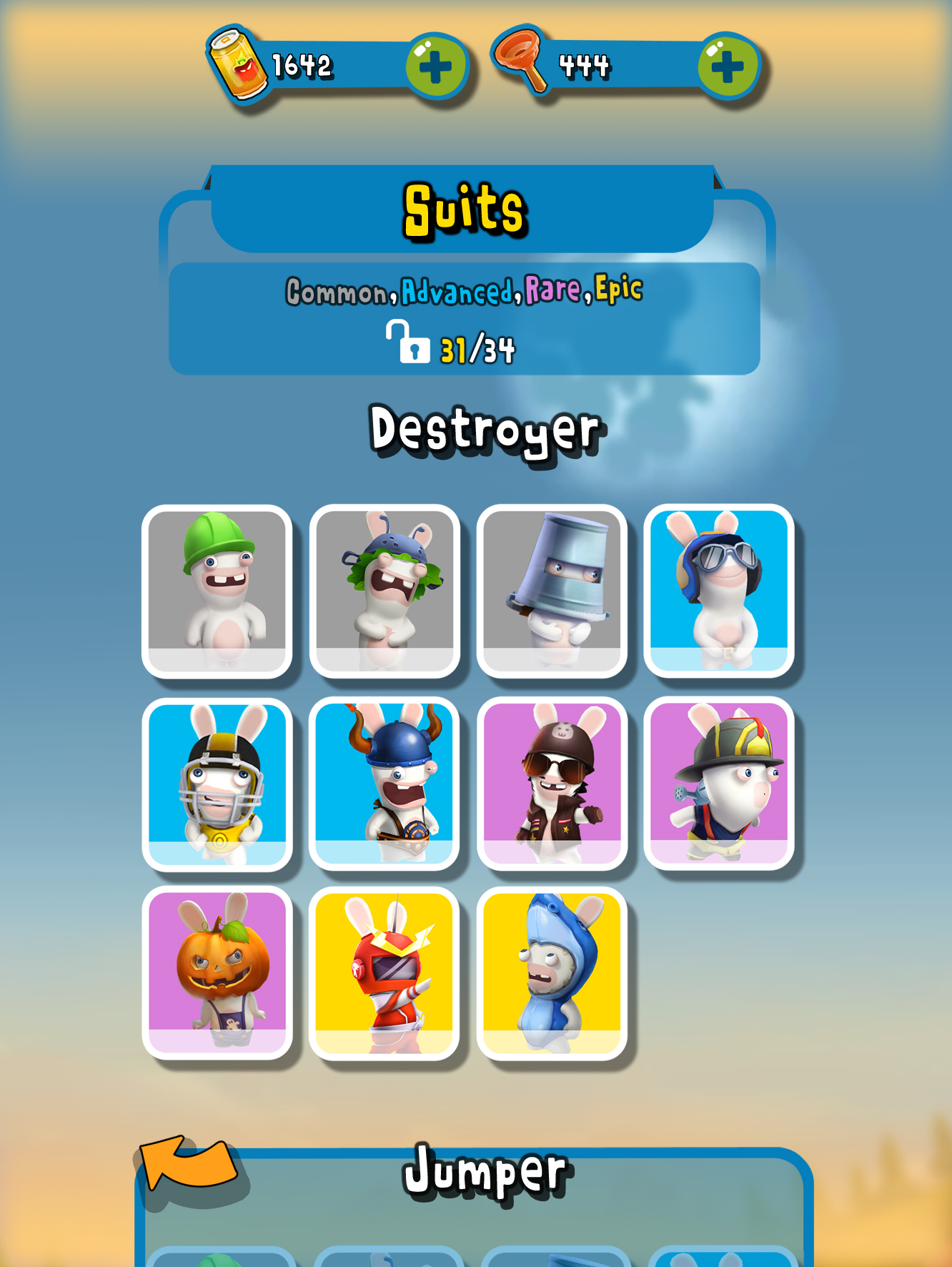 In addition to the main game, there are time sensitive ‘special maps’ which operate on a limited energy basis. If you complete the special map you get a special suit. Suits, which can also be built using pieces collected through laundry coins found in-game, help your Rabbid look cool and give it a power that can be activated mid-run. These powers only last a few seconds at a time, but make a big difference.

The game’s 3D graphics are really enjoyable and your Rabbid’s reaction to crashing almost makes it worth taking one on the nose purposely from time to time. However, on older devices (ex. iPad 4), they can be a bit glitchy. Sometimes this takes the form of screen jumps; other times you might find your Rabbid stuck halfway into an object. While the screen jumps are mostly annoying (though sometimes deadly), a stuck Rabbid usually freezes the game. Not a deal-breaker for the patient, but it is likely that the performance issues will mean some (perhaps many) folks with older devices might turn to a lighter running alternative instead.

Overall, if runners are your thing, Rabbids Crazy Rush is a lot of fun. It is sufficiently challenging and pleasantly addictive. There’s so many levels it can feel endless, even though it isn’t – you can win. It looks good, and the characters are (as the name suggests) rabid in their behavior, yet somehow never teeter into the realm of annoying.

Still, it’s hard to shake that feeling that we’ve been here before. When the strongest criticism that can be leveled against Rabbids Crazy Rush is that it feels an awful lot like another great game, it’s doing something right. However, it does make it hard to declare this one a ‘must play.’

12 New iPhone & Android Games You Need to Play This Week