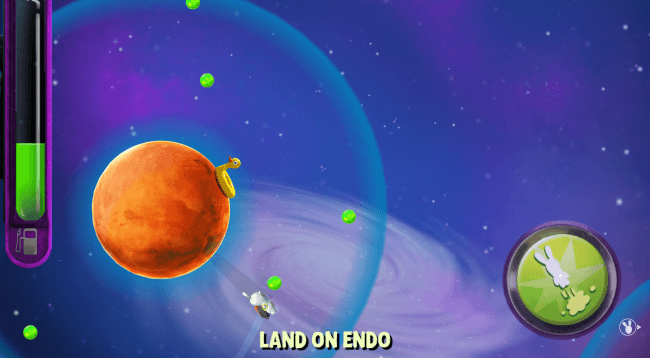 One small step for Rabbid-kind

The wall-eyed, buck-toothed Rabbids have had us doing silly things for years, and now these loony lapins have us hurling them through space. In Rabbids Big Bang, we take part in the Rabbids’ very own space program (which consists mainly of trying to collect floating coins and bouncing off planets) and learn to use their proprietary methods for intergalactic travel. Although fun at first, in mastering the game’s surprisingly challenging physics-based proceedings, too many similar missions make for quickly-developing monotony.

As we all know, the Rabbids are doers, not thinkers. In Rabbids Big Bang, what they’re doing is seeing how much adrenaline they can get out of flying around the Universe, powered by nothing more than a strapped-on soda bottle. There’s no story to Big Bang, so don’t look for one. You simply begin with two Rabbids standing on the surface of a planet, one wearing a jetpack and one holding a baseball bat. Around the planet float other planets, fuel bubbles, gold coins, UFOs, cows, and other weird and inappropriate things, and your goal is to land on, collect, or run into each of these.

At the start of every mission, you tap and hold on a round aiming reticule that determines your jet-pack Rabbid’s trajectory. Once you let this go, the Rabbid with the bat slugs the Rabbid with the jet-pack, sending him shooting into space. Tap-holding again activates the jet-pack, as long as there’s fuel to be had in the on-screen fuel gauge, and allows the jet-pack Rabbid to keep traveling in whatever direction his head’s pointing. It sounds simple, but it’s extremely unwieldy at first. In fact, many players are likely to spend the first half hour watching in horror (or laughing diabolically) as their jet-pack Rabbid repeatedly slams head-first into its home planet.

The main concept to grasp is when to use the jet-pack and when to let gravity do the work. Each planet has a strong gravitational pull that makes the jet-pack Rabbid rotate around it. This can be used to great advantage in conjunction with the jet-pack, to slingshot your Rabbid to distant planetary climes. Navigating can become especially interesting when dealing with multiple planets, all with different levels of gravitational pull, and it’s tricky learning just how much fuel to expend. Fuel is precious because when you’re out, you’re out, unless you have some gold to purchase additional fuel.

Big Bang is the perfect diversion if you’ve only got a minute or two to play, mainly because the missions only last a minute or two. Many can be completed in thirty seconds or less, and those will easily earn you a three-rabbit score. (Levels are scored from one to three rabbits, and you need a certain number of rabbits to unlock additional galaxies.) Some missions can be done with your googly eyes closed—such as “use your jet-pack for five seconds”—and some are frustrating enough to have you pulling at your ears. In both categories, there’s more mission repetition than there probably should be.

Big Bang features ten different unlockable galaxies and 150 missions, but many of the missions are more or less copied from galaxy to galaxy. Small things differentiate them, but there’s a distinct sameness that sets in by the time you’ve unlocked the third galaxy, which makes it hard to think of continuing. Sooner than later, you could be completing missions only to gather enough gold to buy various silly headgear. 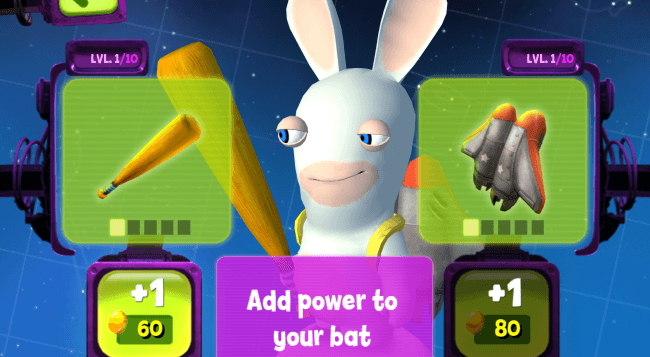 Rabbids Big Bang is fun in small doses. Seemingly designed for micro-game sessions, it offers extremely short (a minute or less) activities for gamers with either very little leisure time or extremely short attention spans. At $0.99 currently, it’s an impulse buy you won’t regret, but one unlikely to hold your attention in the long term.