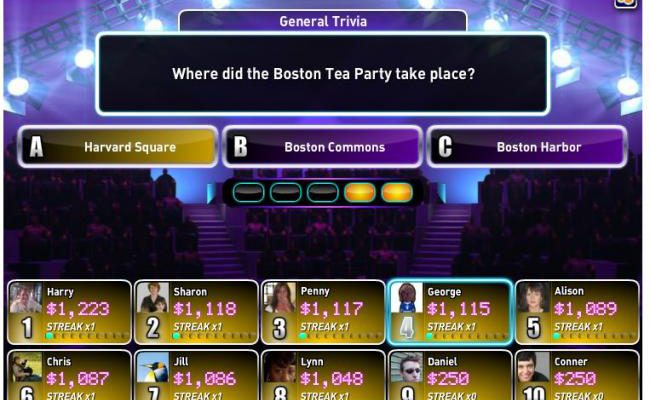 Question: Should you play QwizShow? Answer: Sure, why not.

The Internet is an infinite storehouse of knowledge. If you have a question, the answer is at your fingertips—no matter how bizarre, no matter how perverted (in fact, the more bizarre and perverted, the better). But the Internet has a much more important function than dispensing the sum total of mankind’s knowledge: You can harness its massive audience in order to regurgitate your own stores of knowledge and demonstrate your intelligence to strangers. QwizShow for Facebook is a basic, non-offensive means of showing off your smarts.

QwizShow is a social trivia game that lacks fancy gimmicks or bells and whistles—potentially a good choice for anyone who finds the flashiness and sarcasm of You Don’t Know Jack a little off-putting. The trade-off is that there are few surprises; even the categories aren’t much to write home about. Your choices are general trivia, pop culture (movies, music), and sports (which is centralized around US facts and statistics).

Once you pick your category, you wait in the lobby until ten other players join in. The wait rarely exceeds more than a minute, so put your thinking cap on ASAP.

The first round fires off multiple-choice questions for a singular amount of points. Then you wager some (or all) of your earnings on one question and proceed to the double-points round. When that’s done, the top five earners are allowed to proceed to the final triple-point round. The bottom five earners can slink back to the lobby, or they can watch how the game plays out. In fact, they can bet on who will come out on top. This is a fun feature, as you can see how many bets are placed on you. It’s exhilarating and stressful to have hopes riding on your performance, and when you inevitably screw up, you kind of want to hide in a hole.

A round of QwizShow moves quickly, which makes it an ideal lunch break game. You’re allowed a certain amount of free games a day depending on how many days you play in a row, and the application’s monetization scheme isn’t  too grabby: For a certain amount of Facebook credits, you can play as many games as you want in a month. 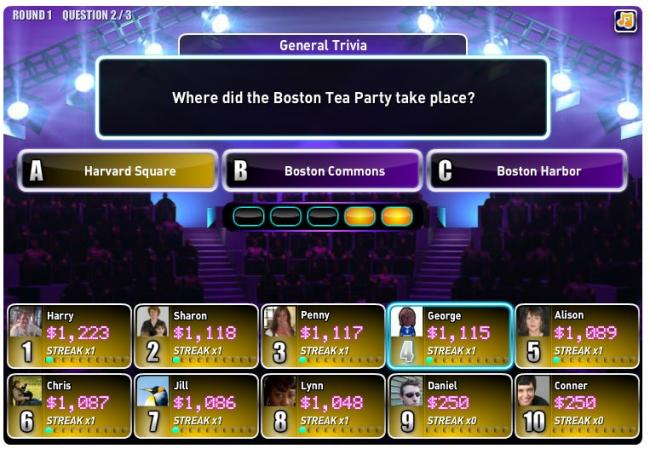 QwizShow could benefit from some fine-tuning, however. It would be nice to have more than three quiz categories to choose from, especially since “general trivia” is, well, very general. If you’re really into books but your geography isn’t so hot, you’re going to have a problem if the game randomly selects a lot of geography questions to wade through. Same goes for the music category. What if you’re into movies, but you’re not big on music? Even a few sub-categories would be tremendously welcome.

QwizShow‘s presentation is bare-bones, too. There’s a static audience lit up by some stage lightning, and listening to the over-eager announcer is as compelling as listening to a toddler bang a pot with a spoon. Thankfully, you can turn off the sound. 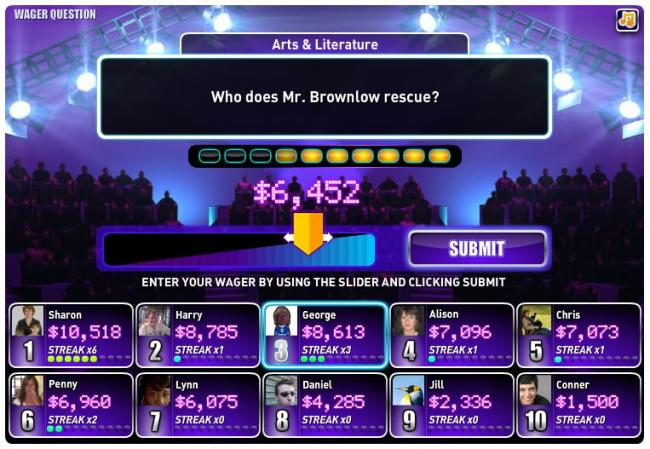 QwizShow isn’t a bad game by any means. It’s perfectly average. If you’re hungry for a new Facebook quiz fix, it provides the basics.