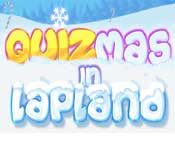 Cold weather has finally arrived in Texas and I love it as I stay cozy inside with a warm blanket, peppermint mocha coffee and a holiday game to wrap me in lovely holiday spirit. None other than St. Nicholas plays host – a Christmas version of Alex Trebek – in the Christmas trivia game Quizmas in Lapland.

The trivia game has two types: single player or multiplayer with up to three players. Both come with a mode called In-a-Row, and multiplayer mode also has 3 Lights mode and first to 10.

Only In-a-Row is available immediately, while the rest have to be unlocked. In-a-Row ends as soon as a player gets an answer wrong. This is the least enjoyable of all the games as it becomes frustrating to have the game end quickly. These Christmas questions are hard, and the answer the game gives isn’t always correct. A sampling:

The game refers to comedian Stephen Wright as Steven Wright. It’s a minor typo, but it shows not a lot of research went into confirming facts. To make matters worse, Quizmas in Lapland doesn’t save progress at all. If you exit the game, all data is gone including players’ names and unlocked games. Because of this, I have to play the dreaded In-a-Row again so I could unlock the others. Twice, the game exited itself and everything was gone.

Getting 10 correct answers in In a Row unlocks Quickfire. 20 correct answers in In a Row unlocks the multiplayer game 3 Lights. Unlocking First to 10 requires correctly answering 20 questions in 60 seconds in Quickfire. Sure, you can pause the game and do the research. But the questions are hard to read with the h  u  g  e    s  p  a  c  i  n  g, making it difficult to read fast enough.

3 Lights offers more entertainment since players can keep playing until their three lights go off. It’s still Christmas trivia, but at least the game doesn’t kick you out the minute you get one question wrong. First to 10 works like 3 Lights except players continue to play until the first one reaches 10 correct answers. However, get one wrong and you return to zero.

Santa Claus looks as sharp as ever as he receives brilliant colors that make him look shiny and his face healthy. The background naturally fills with snow as each player sits behind a Jeopardy-like podium decorated with sparkly garlands. Available avatars include male elf, female elf and snowman. Christmas music naturally plays while you scramble to unscramble jumbled letters that make Christmas-related words or figure out the answer to the question.

Families with young children might find this an entertaining way to enjoy the holiday season and break from school. However, the one wrong answer and you’re out (when you haven’t unlocked the other modes yet) and no way to save the game could test the patience of even the most laid back person.