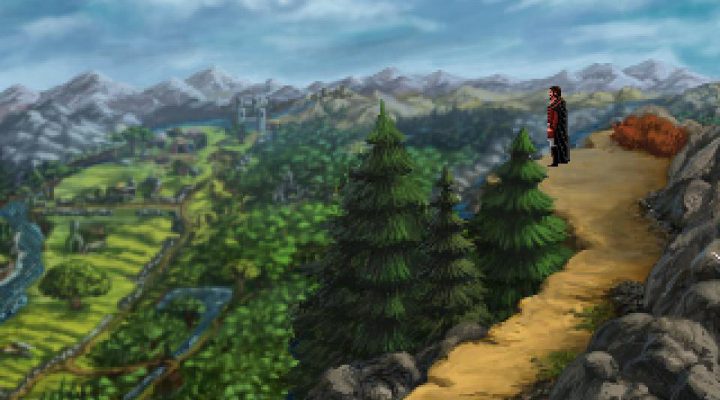 A massive, engaging world filled with charming and ridiculous characters.

Perpetually light-hearted and packed with jokes, references, and hilarious descriptions.

Gorgeous, lush scenery that is different on every screen.

Lack of direction at the beginning makes it difficult to get started.

Swordplay combat is heavily luck-based and overly drawn out.

Exits are often hidden and fail to activate even when found.

Quest for Infamy is a Kickstarter Cinderella story: 12 years in the making, nearly abandoned due to life-threatening illness, and brought back from the brink by the sheer passion of its co-creators (and a new kidney).

Despite being the first original title developed by Infamous Quests, the team behind this Quest for Glory-inspired journey already had hands-on experience with Sierra games via their VGA remakes of King’s Quest III and Space Quest II, as well as a lifelong love of the genre. This love is visible in every inch of Quest for Infamy: from its expansive lore to its saucy sense of humor to its divergent classes, it’s a world worth getting lost in numerous times. 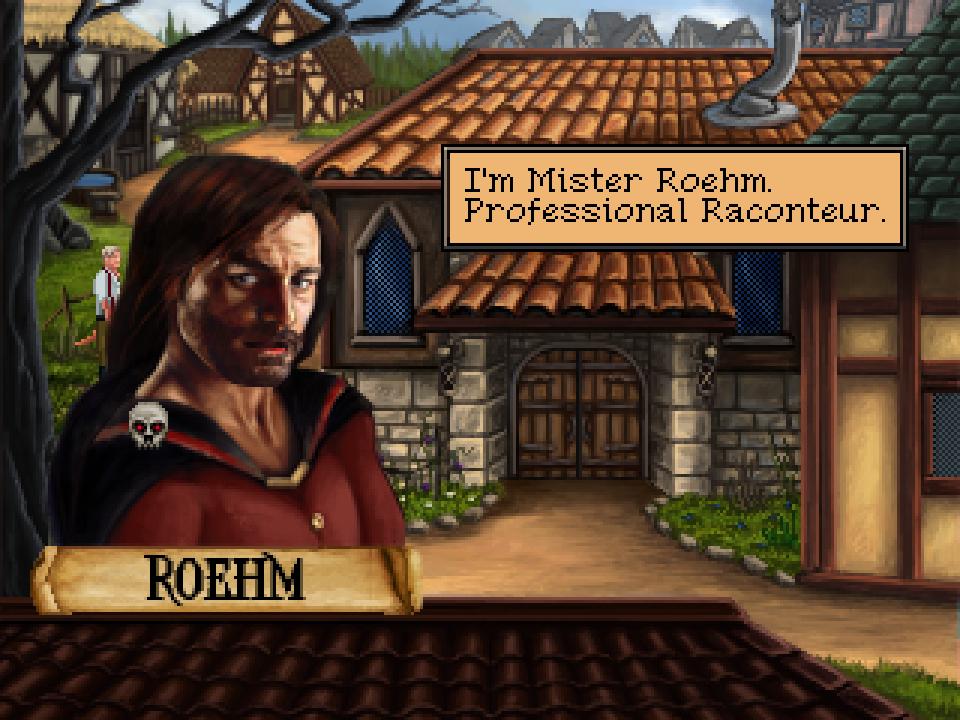 Our interaction with this world comes through protagonist Roehm, an aimless wanderer who flees to the Valley of Krasna after being caught in a compromising position with the baron’s daughter. With the bridge to the north temporarily down, Roehm (pronounced like “roam,” get it?) winds up trapped in the valley with little to do but wait and take on odd jobs for the equally odd locals.

This begins with one of three “mentors” who offer to train him in their respective areas of expertise: as a brigand, sorcerer, or rogue, which act as Quest for Infamy’s classes. Although all three classes share certain skills, like climbing, they each have a specialty that influences how Roehm will solve challenges: brigands use brute force to get out of jams, rogues prefer stealth, and sorcerers gain a series of spells that balance the abilities of the other two. 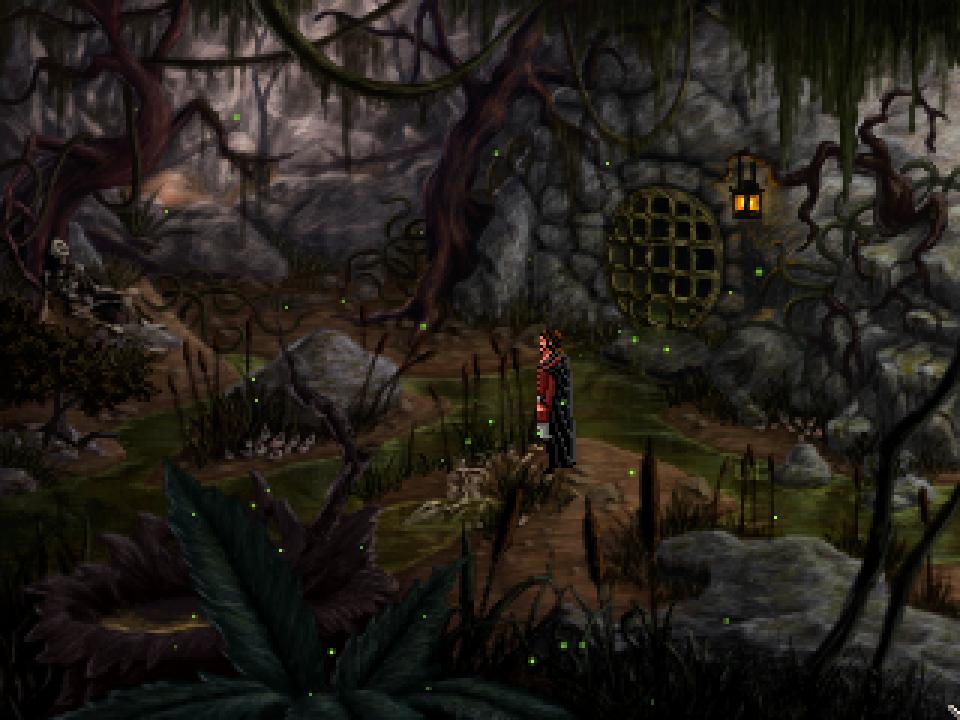 Unlike Quest for Glory and the more recent Heroine’s Quest, Quest for Infamy does not feature a class creation option. Roehm will automatically receive skill points relative to the class he chooses and any increases beyond are based solely on usage. This is more newcomer-friendly, as it ensures you won’t create a detrimentally unbalanced character, although it does remove some of the player license.

There is still plenty of post-class freedom, however, in what skills you choose to upgrade. Whether you spend your days climbing trees, shooting bows, or slaughtering everything in sight, each skill comes in handy when solving puzzles and challenging enemies, both of which Roehm does plenty of. 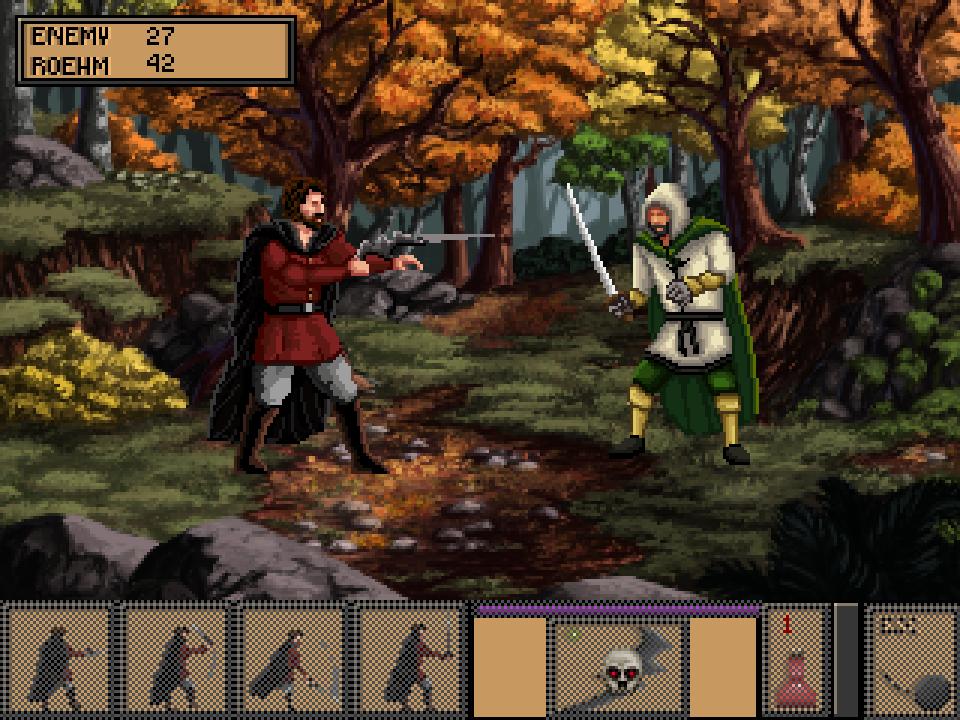 Another variation on the Quest for Glory formula is the switch from an active battle system to turn-based. While in combat, you have about three seconds to select an action—whether it’s a type of swordplay, magic, healing, or stealth attack—and lock in your selection. Enemies will do the same, and you’ll trade attacks one-for-one until someone falls. Attacks’ power are determined by the type of enemy you’re fighting as well as your affinity for those skills, which—like everything else—increases with practice.

This familiar combination of adventure and RPG elements is the heart of Quest for Infamy’s gameplay, and the two are integrated seamlessly. The sneak skill which lets Roehm avoid fights will also help him get around quest-posted sentries. Magical spells come in handy both offensively in battle and while searching for useful items in the world. His trusty bastard sword can fell a foe, cut off its head for a quest, and even breach breakable doors. Everything that is inherent to the point-and-click genre is supported by its usage-based stats, and putting time into one is bound to improve the other.

Much like its inspiration, Quest for Infamy begins extremely open-ended: Roehm is really just killing time in the podunk village of Volksville until the northern bridge is repaired. A primary quest with a villainous threat and kingdom-saving goal is introduced as you explore the world, but for the first few days it’s easy to wander without much purpose or clue to what you should be doing. This is both a blessing and a curse: by the third day, you can access almost any part of the valley, but with little reason to do so. Players familiar with this format from early Quest for Glory games—or more recent Western sandbox RPGs—should enjoy this freedom, while others may understandably wish for more direction.

Thankfully, no matter your comfort level with this lack of linearity, exploring the Valley of Krasna is an absolute joy. The world is beautifully detailed and lusciously varied: just wandering the forest provides dozens of screens that each manage to present “more trees” in new ways. Even scenes without interactive objects used solely for travel are still unique and recognizable upon subsequent trips and mental map-making: the shadowy bend dotted with wildflowers; the flat prairie covered in Stonehenge-like debris; the open farmland with a talkative, but inconsequential, goat. 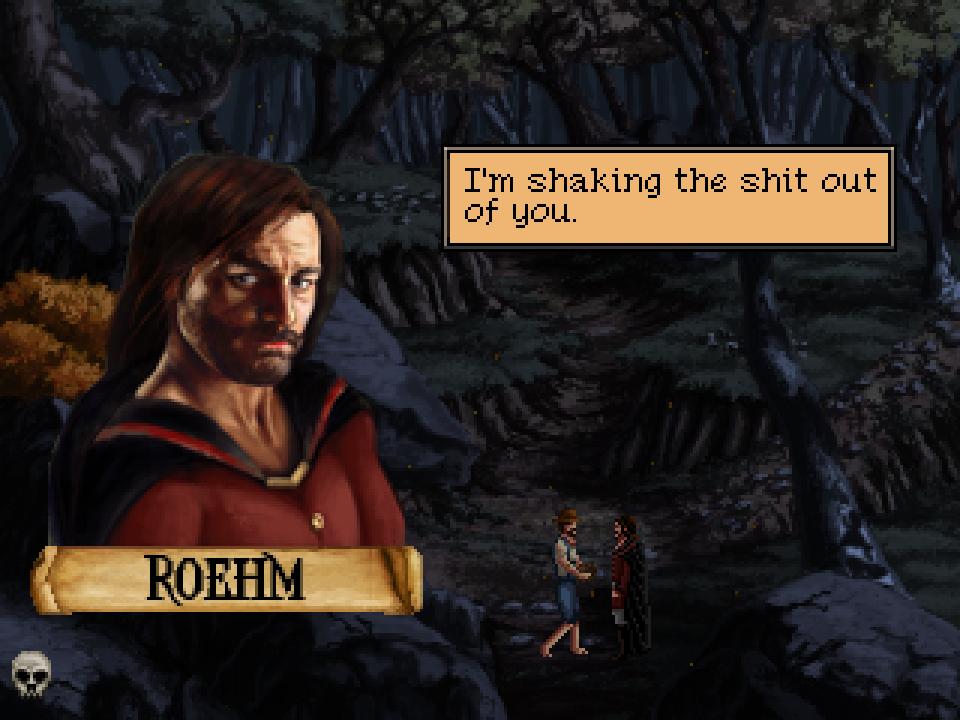 Journeying with Roehm is also a treat. He’s a surprisingly likable pseudo-hero, for a guy gaining “infamy points” throughout his adventure. This likability is a bit subjective, as Roehm himself ponders at one point “Is everyone in this valley an asshole?” But for a guy stuck between a rock and some assholes, he fills his time with fairly noble efforts that also just happen to line up with a desire for wealth and women.

He’s friendly toward villagers, patient in his predicament, merciless towards slavers, and even forgiving of brutes (depending on how you play him). He’ll hit on anything with breasts, but since most women in Quest for Infamy are independent and uninterested, Roehm comes off as more a harmless flirt than a womanizing wanker. His recurring theme is “I just want to get the hell out of this valley,” but he’s never whiny about it: he tries to enjoy the sights, sounds, and saloons along the way. 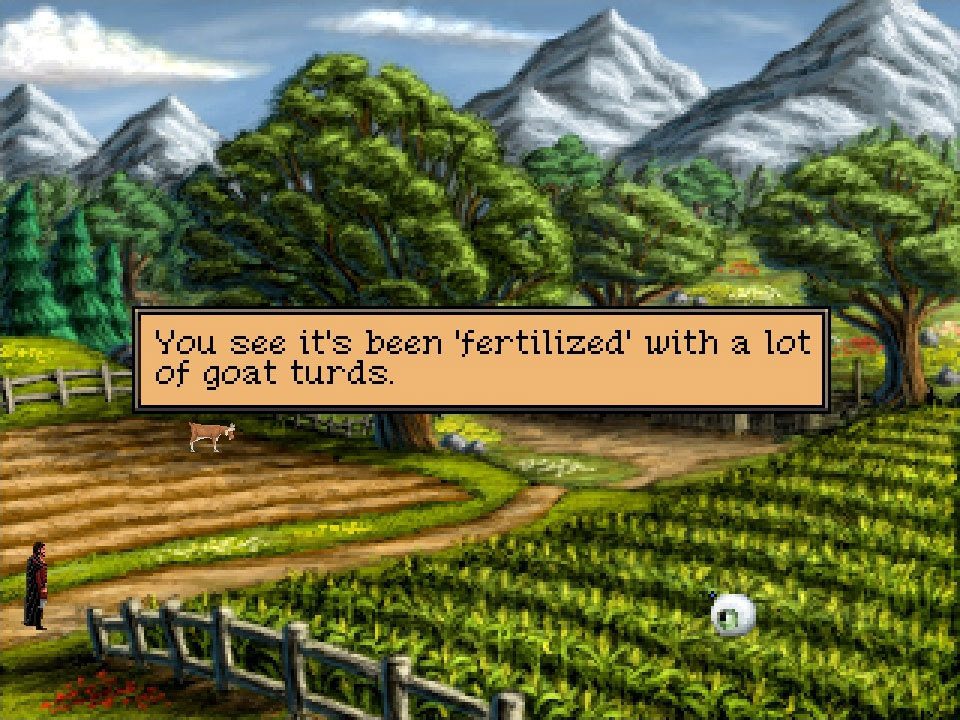 Accompanying Roehm and the player is the third-person narrator, who replaces Roehm as the commentator on any examined areas or failed item combinations. The narrator is the source of most of the game’s humor and fourth wall-breaking, whether he’s explaining how games work—“It’s a stump. Sometimes adventure game designers put stumps in the game just to annoy you,”—or mocking Roehm for any number of actions, like examining a cat—“It’s a cat. Should I explain further or just direct you to Reddit?”

Quest for Infamy never takes itself seriously, and the narrator is a constant playful reminder of that fact, although the citizens of Lonaria also support this mentality. The general store owners are part Honeymooners, part Billy Crystal and Carol Kane from The Princess Bride; the apothecary enthuses about executions because they bring him more customers; the local gnoll finds treasure-guarding severely boring but continues to do so because he’s a gnoll and well, that’s what they do. 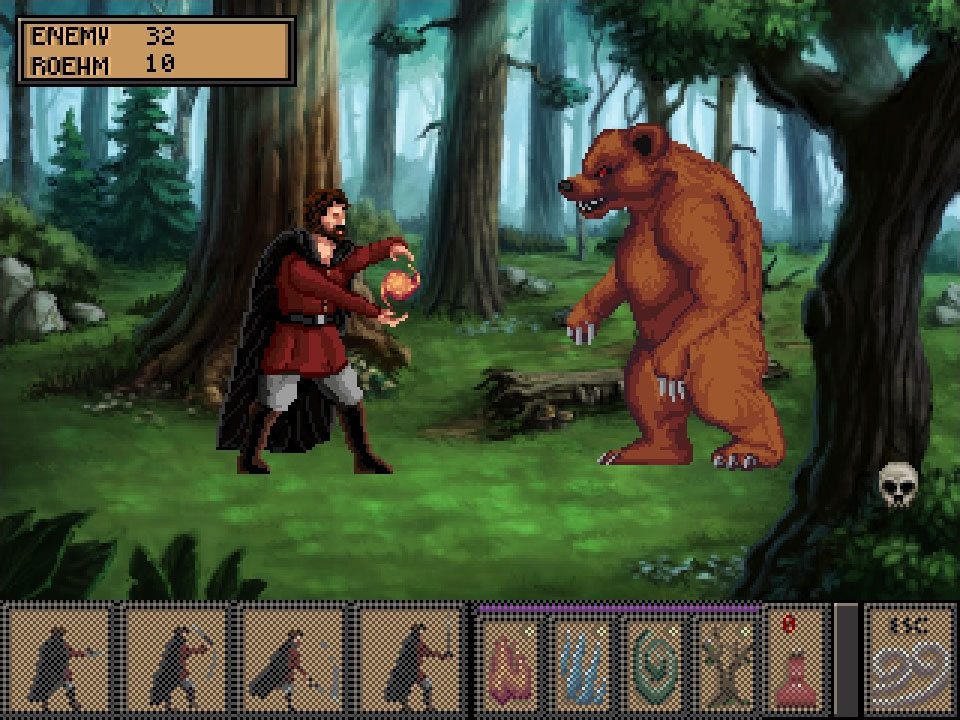 The world is packed with personality and nostalgic references to past games, but its fondness for days gone by is also its greatest hurdle. Quest for Infamy is difficult in the way only older games are: its map provides a few fast-travel points but no real directional guidance, its characters sometimes offer advice that will never be repeated (note-taking required), and its lack of guidance can leave players without a goal for days on end. The in-game hint system, presented as a gypsy fortune teller, gives up offering advice after the first Act. The turn-based battle system is unforgiving even on easy difficulty, placing too much importance on weapon hit percentage and devouring health points from Roehm regardless of his armor.

These will be appealing features to hardened Quest players, but might dissuade newcomers from being immersed in what is overall a truly gratifying, if occasionally exasperating, experience.

The result is a game that is nearly perfect in its presentation—its characters, dialogue, puzzles, and world are brilliant in their combination of believable depth and ridiculousness—but requires significant player effort to unlock all of its potential. Is it worth the effort? Absolutely. And at the very least, you’ll have Roehm to empathize with you when the going gets vague: “Oh, for God’s sake just let me go on and stumble upon what I’m supposed to find.”