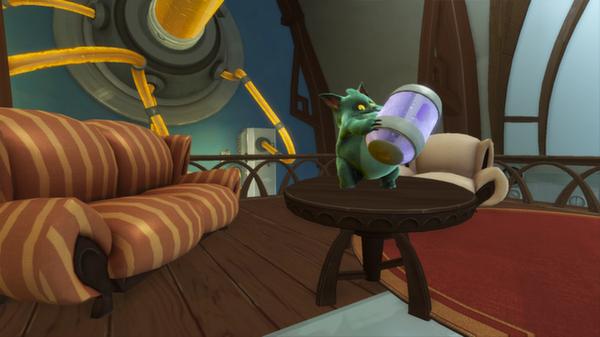 The same way I occasionally get tired that random passersby mistake me for Gerard Butler, I can only imagine that Kim Swift and her team are getting tired of having Quantum Conundrum constantly berated as a “Portal clone”. Yes, they are both witty first-person puzzlers with a unique dimensional physics mechanic. Unknown by many, Swift left Valve to pursue Conundrum, so you’d think she’d be off the hook by now.

Regardless, I’m going to go through this entire review without mentioning the Portal series. Not only because it’s become a tired comparison, but also because Quantum Conundrum is a game worthy of being discussed on its own merits.

The premise is zany: you’re dropped off at your mad scientist uncle’s home, Quadwrangle manor, only to find that he’s been missing as the result of a failed experiment. He’s met with a strong case of amnesia, but can luckily tune into the mansion’s video system to watch your every step. It’s up to you to restore power to the mansion while getting to the bottom of the disaster that started the mess in the first place.

No trip through a mad scientist’s home would be complete without a wild invention, and Professor Quadwrangle’s Interdimensional Shift Device (the IDS for short) delivers on that promise. The IDS gives you the power to transform the mansion’s dimensions of mass, time, and gravity, all while preserving your original dimensions while holding the glove. Sound confusing? Don’t worry, they ease you into it.

There are four total dimensions at your disposal over the course of the game: Fluffy (light), Heavy, Slow Motion, and Reverse Gravity. Quantum Conundrum starts you off slowly by easing you into dimensions one at a time.

Early on, you’ll be completing simple tasks by shifting between two dimensions, such as making a giant safe fluffy so that you can carry it, or by turning a simple cardboard box into the equivalent of an anvil through the heavy dimension.

Once you’re working with all four dimensions at once, though, things get insane. You might start with the Fluffy dimension to throw a heavy safe, only to follow that by quickly switching to Slow Motion in order to hop onto the object you’ve just thrown. Then you’ll alternate the reverse gravity dimension on and off in order to ride your newfound platform on a sinusoidal trajectory. And finally, you’ll go to the Heavy dimension to block a laser beam. It isn’t just fun: Quantum Conundrum has some of the best-crafted puzzles ever made.

While the game isn’t exactly a boon for storytelling, its colorful setting and atmosphere perfectly accompany Quantum Conundrum‘s equally bizarre gameplay. Your uncle is the perfect example of a smug, self-indulgent scientist that leans on the verge of insanity, and his vocal accompaniment provides constant entertainment throughout each trial. Along with his silent furry friend, the Interdimensional Kinetic Entity (Ike), there’s plenty of character to be found in an otherwise empty home. 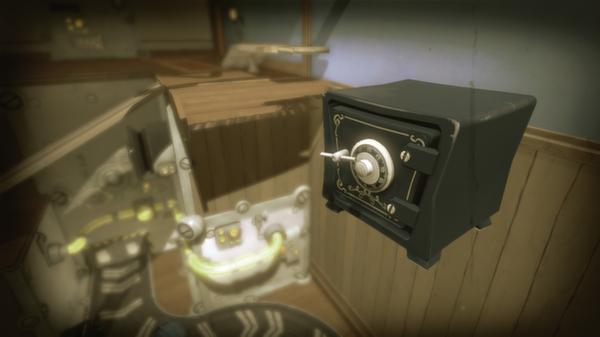 It might be a bit of a gimmick, but there’s something about the mansion itself that I absolutely love: the paintings. Every painting in the game shifts along with your dimensions to match. For example, a painting of Professor Quadwrangle might adorn a pink bunny suit to match the fluffy dimension, or the apple in his hand might fly upward in reverse gravity. It’s a small touch, but it became so entertaining that I sought out every painting and dimension that I could.

Unfortunately, despite the game’s personality, it simply didn’t deliver a very strong conclusion. All spoilers aside, the game ends on an anticlimactic note, both plot-wise and gameplay-wise. There is no boss battle or enormous encounter to be found: the game simply ends. While this kind of expectation was likely set up by another popular physics puzzler that shall not be named in this review, I couldn’t help but yearn for just a little more oomph to conclude by adventure.

Aside from this one flaw, I couldn’t find one other thing I didn’t like about Quantum Conundrum. I could easily see more puzzle-oriented players getting frustrated with the game’s physical platforming challenges, but to me they only added a sense of urgency and excitement that most puzzle games simply never achieve.

I played through the main adventure in two long sessions of four hours each – it was one of the last times in a while where I found a game I truly couldn’t stop playing. If you’re looking for a console-quality puzzle platformer at a mere fraction of the price, Quantum Conundrum is a charming experiment well worth your lab time.