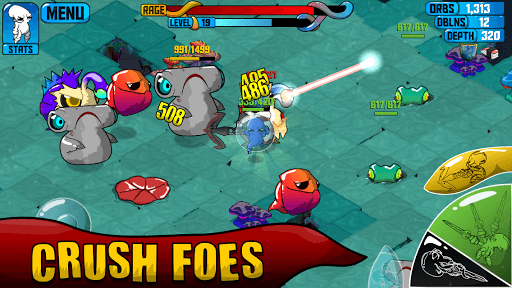 Quadropus Rampage is an outstanding and ridiculous follow-up to Towelfight 2.

From the minds that brought you Towelfight 2: The Monocle of Destiny comes Quadropus Rampage, an “endless rogue-like brawler” starring an octopus with four arms and his pet starfish Bingo, as the duo undertake an epic and awesome quest to strike down Pete, the wicked God of the Sea.

To describe Quadropus Rampage as a bit odd would be like referring to Jupiter as pretty big: accurate, but not really adequate. Developed by the weirdos at Butterscotch Shenanigans, Quadropus Rampage is a sort-of sequel to Towelfight 2 in which Hardik – the hero of that game, and now rechristened Lord Hardik, master of all the cosmos – has chosen you, Tack the four-armed octopus, to venture deep under the sea and defeat the mad god Pete, who is raising an army against your master.

But aside from a vague sense of continuity and a cameo appearance or two, Quadropus Rampage is entirely its own game. It’s not a twin-stick shooter, for one thing, but more of a real-time rogue-like with fast-paced combat. The freedom to wander that made Towelfight 2 feel so expansive has been replaced with small, tightly-constricted levels that compel you to dive ever-deeper into more dangerous challenges.

Each level is an isometric field that can range in size from small to very small, and may be completely solid or pitted with any number of gaps and holes. They’re also dangerously lacking in guardrails, and any slight misstep means an untimely and damaging tumble to the next level. Tack’s movements are controlled by way of a virtual thumb-pad that’s actually quite smooth and accurate, and he can also dodge enemy attacks and even sail over openings in the sea floor with his cephalopod jet, leaving a cloud of ink behind him.

Offensively, Tack uses a bizarre variety of clubs to poke or swing at his enemies, which range from conventional weapons like swords and tridents, to more unconventional ones like tennis rackets, electric guitars, tree branches, gigantic scissors and even a familiar-looking blue bird that appears to be tied to the end of a stick. Each of the many weapons you’ll run across as you progress deeper under the waves does a unique amount of damage, and also provides bonuses to health, toughness, running speed and other attributes. Tack can also unleash a “slam attack” that does area of effect damage, and raise a “bubble shield” that very briefly renders him invulnerable. 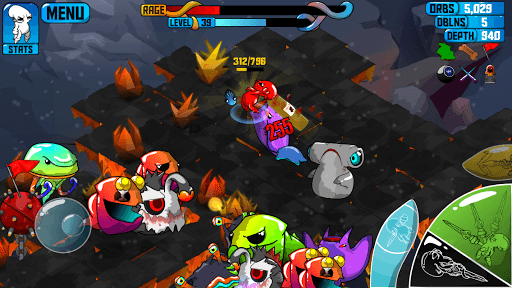 Golden orbs collected from fallen enemies and treasure chests can be used to acquire permanent upgrades to Tack’s vitality, agility, damage, and other abilities, while achievement-like “masteries” offer more specific improvements for accomplishing certain goals like knocking 250 enemies off of ledges, or defeating 5,000 of them with spin attacks. Along with the orbs, you can also collect the far rarer doubloons, which can be used to unlock masteries immediately and resurrect Tack once per game should he fall in battle.

Enemies come in a variety of shapes and sizes, some employing ranged attacks and others who prefer to go “mano-a-mano,” and they also grow in size and toughness as you descend. There are boss monsters to take on as well, and even Pete himself shows up now and then in spirit form to either taunt your incompetence, or suggest that you try doing something more productive with your life.

That, of course, is the Butterscotch Shenanigans “signature,” and it’s that strange humor that will either make or break this game for many players. Quadropus Rampage is a solid and challenging action game in its own right, but what really sells it is the comedy, and if you don’t think that a mad god named Pete or a mighty weapon called the “Funky Frog of Cardiac Arrest” are at least a little amusing, this probably isn’t for you. If you do, however, there’s plenty of that kind of wit in store, and while it’s not always laugh-out-loud funny, it’s very consistently charming. 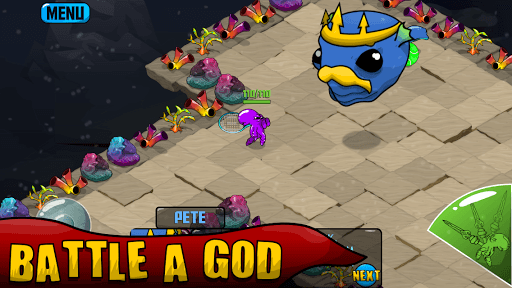 My biggest complaint about the game, aside from the fact that it’s hard and I’m terrible at it, was that the buttons were a little too small for my clumsy thumbs – until I checked the menu and discovered that they can actually be made larger or smaller to suit your personal preference. The only other potential downside is strictly a matter of taste: it’s bright and colorful, the music is wonderful, and there are all sorts of goofy bells and whistles, but the bottom-line gameplay – poke or smack things until they pop – remains unchanging from start to finish. The difficulty ramps up quickly enough to keep it interesting if you like that sort of thing, but if your thumbs get bored easily, you might, too.

But my reservations are minor and few, and overall Quadropus Rampage is an outstanding game and a fine follow-up to Towelfight 2. It’s fast, it’s challenging, it’s funny, and most important of all, it’s a lot of silly, goofy fun.