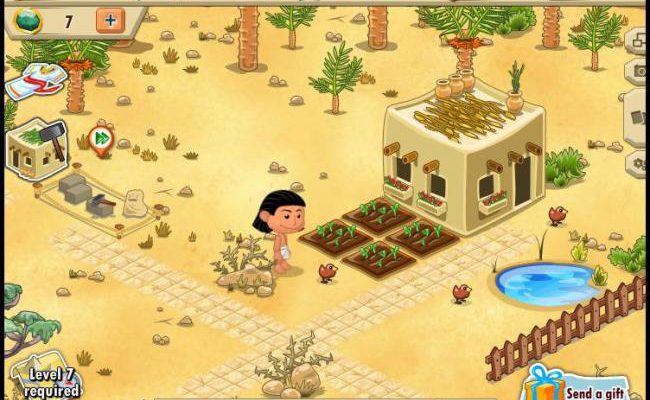 PyramidVille tacks a new visual theme on to a familiar game

An older game by the name of PyramidVille has been seeing a bit of promotion in recent time on Facebook. A social city-building games, it whisks users back to the realm of ancient Egypt and tasks them with the construction of a thriving, ancient community. Filled with a variety of common social game mechanics, it is a game that involves its fair share of resource management, as well as several borrowed features.

PyramidVille, from Kobojo, takes a number of cues from similarly designed games like FarmVille and FrontierVille (even the name). You build your Egyptian paradise by managing the generation of population, food, and construction resources (clay, stone, wood, etc.). Though there is a good amount to concern yourself with, it isn’t overly difficult, as most of these tasks have been done in other games. 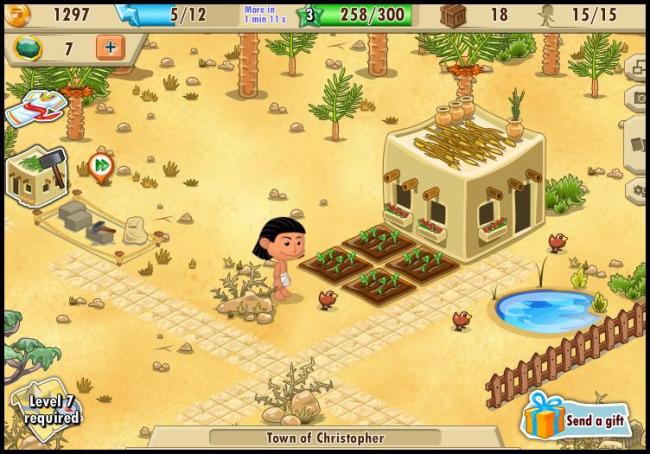 Population is the most basic of aspects to manage, and is increased by building various houses. Once constructed, food must be periodically provided for its residents, which is produced in the standard FarmVille fashion of planting crops or harvesting from production animals like chickens or cows. Once fed, the homes will then begin providing a steady tax income.

Population also plays into the production of the various construction materials required to build different buildings and items. Like FrontierVille, the space around your village gets filled with debris, rocks, and trees that need to be cleared so you can expand. Upon clearing any of it, experience, coins, and raw materials (like lumber) will be collected. This lumber can then be used in various production facilities to produced refined versions of that raw material. For example, logs can be turned into wooden planks. However, in order to build a production facility, enough population is required.

These different materials can be crafted from any number of facilities and run the gamut of metal to cloth. Along with production buildings, you are also capable of creating more impressive “Wonders” (e.g. the Sphinx) that will provide bonus materials every few hours. 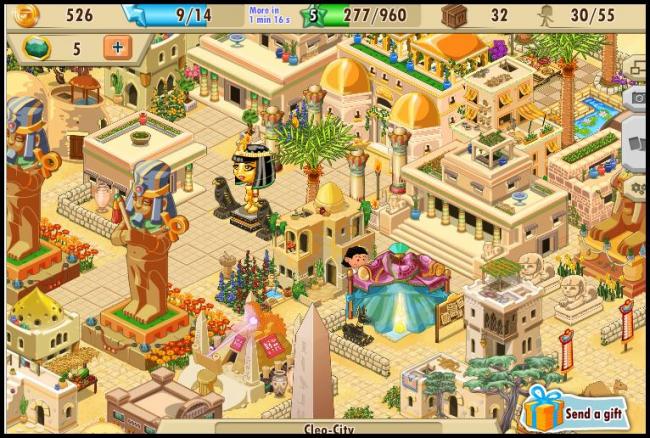 Another standard mechanic that works its way into PyramidVille is a quest system that gives you various short-term objectives to work towards. These usually include something like building a specific item or planting X amount of crops. There are also collections that can be garnered with the items randomly being found by performing appropriate activities, like collecting taxes from homes or harvesting crops. Once an entire set is collected it can be exchanged for rewards such as food or rare decorations.

Decorations play moderately into the social elements of PyramidVille too. As per normal, you can visit your friends to view their virtual space, but as an added bonus their avatars will often come to your home and meander about (though they don’t actually do anything). Other than that, gifting items is also included, but there is one called the “Mystery Gift” that is a bit more interesting. Through this item, that friends will have a random chance at receiving more rare and unique decorum instead of more boring items like, say, a basket.

As you can probably tell by now, PyramidVille doesn’t offer anything terribly new. It has a decent aesthetic with the Egyptian theme, but pretty much every single feature has been seen before. All together, these make for a marginally newer experience, but ultimately it comes down to playing the same game you have seen a hundred times before. It will really only be alluring if you are looking for a change in visual style.