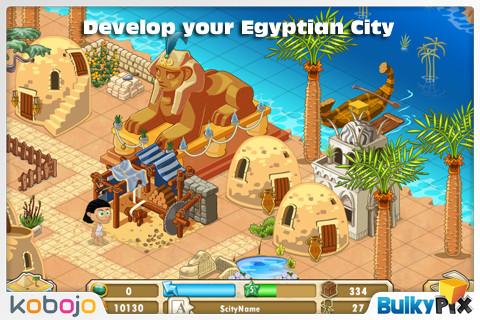 PyramidVille Adventure is a marked improvement over its Facebook predecessor

A while back, Kobojo released its own version of the virtual space-oriented business sim genre with PyramidVille on Facebook. Harkening back to the realm of ancient Egypt, the title was fairly standard, but now, with the help of BulkyPix, the studio is attempting to improve the game with the new iOS version PyramidVille Adventure. Hosting much of the standards of the genre, this new version does away with many of predecessor’s social elements for a somewhat more in-depth management aspect, simple mini-games, and a more convenient platform.

Still a city-building type of game, PyramidVille Adventure gives users a bit more of a streamlined direction. The goal is still to build a bustling ancient city, but now players must do so for their father, Pharaoh Nevhr-Die, following a trail of various missions and new trading mechanics to do so. All that having been said, the core of the game is very much the same formula it has always been, only slightly improved and polished.

Like the original PyramidVille, players must manage various resources such as population, income, food, and building materials. Each one is required for one of the others. Population is derived from building various houses and provide a tax income periodically. However, in order for citizens to pay their taxes, each home must be supplied with goods garnered from food products such as crops, animals, and trees (which are grown FarmVille style). Moreover, for the homes to be built in the first place, various crafting materials such as clay, wood, and so on, are required.

In a similar manner to FrontierVille, such materials are generally earned by clearing encroaching debris and flora. That said, various production buildings can be tasked with producing these as well, but require both coin to operate and a set population number to be constructed. Additionally, PyramidVille Adventure keeps with the standard energy system, meaning that all actions consume the resource. It will recharge over several minutes, unless players opt to refill it with energy replenishing items bought via virtual currency (this currency can also expedite the construction of various buildings).

It might sound like a lot to the uninitiated, but it really isn’t, and is nothing terribly new to this style of game. That said, the app does begin to stand out with the variety of crafting materials it employs. As players work their way through their levels, they will be able to begin trade with other neighboring cities. Each of these provides some semblance of resource that cannot easily be acquired by any other means, but asks for something that is. Working in the same fashion as production buildings, players can initiate trades, over a period of time in order to earn rare crafting materials. Since trades can take a while to accomplish, the time can be reduced by successfully playing a trio of mini-games.

These games are amusing, but nothing terribly difficult. They consist of flicking away pirates that approach one’s vessel, controlling the boat Breakout-style in order to catch falling supplies (while avoiding anvils that will sink the boat), or racing against a rival trader by jumping over obstacles on a 2D track. They each add a moderate break in the monotony of the game style, with the flicking of pirates being particularly enjoyable. 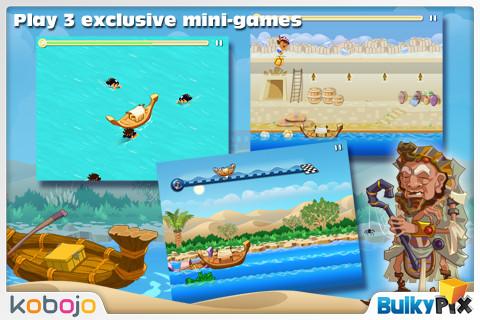 As for PyramidVille Adventure‘s quest system, most of the quests are fairly basic and sequential; typically consisting of reach X number-type tasks. That said, they do often offer decent rewards such as decorative items or the means to upgrade one’s trading vessel (which unlocks new ports to trade with). Stylistically, the game feels a bit stronger than the original too. Not so much in terms of the aesthetic, but it does throw in some amusing puns for names and character commentary. Furthermore, being on mobile is far more convenient than on Facebook as access to the game is almost always present and push notifications are available if desired.

All in all, PyramidVille Adventure is a bit more interesting than the original Facebook rendition, but still feels fairly formulaic. It’s not a bad game, and does have improvements, but doesn’t provide anything particularly earth shattering. That said, the newer mechanics such as trading and its associated mini-games do show promise, and could be interesting should they be iterated upon to be deeper and more functional than they currently are. As such, Pyramid Adventure is a somewhat above average city-building sim that’s worth a peek for fans of the genre.