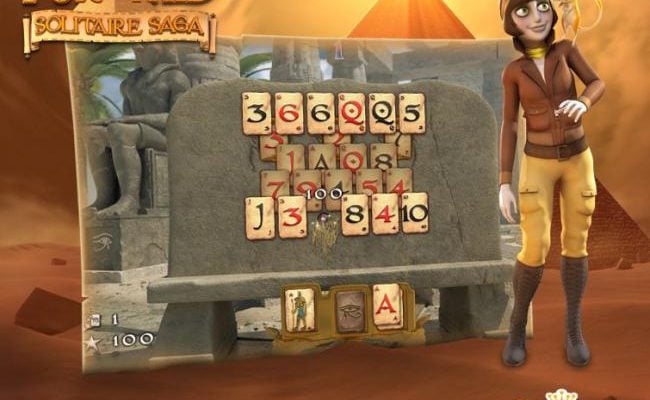 Explore the pyramids of Egypt as an expert archeologist/solitaire whiz

If you’ve been on Facebook in the last few months, you’ve noticed that the games banner is dominated by titles with the word “saga” at the end of them. These popular pasttimes all come from the same place – international casual game company King.com. The folks at King.com have more than proven they get how to make obsession-inducing gameplay, as their latest effort, Pyramid Solitaire Saga, readily attests.

Like other King.com games, Pyramid Solitaire Saga is light on complexity but heavy on fun. The schtick is that you’re an archeologist of the (albeit female) Indiana Jones variety, all cargo pants and boots, and you’re bent on exploring the pyramids of Egypt. Of course, that’s all just the frothy fictional foam atop a strong, steaming cup of solitaire espresso. (I’ve got my corny metaphor hat on today.) While there’s no story to speak of, you really don’t need it. King.com’s created an expectation with its titles of interesting settings, nice graphics and good gameplay, and that’s exactly what you get here.

Starting in the desert outside of two large pyramids, you progress through the game (and across an orthographic map) by playing rounds of solitaire. Cards are laid out on a stone tomb in various formations, and in a simplified version of classic solitaire, an accompanying match deck allows you to create sequential card chains. The idea is to remove the cards on the board until particular golden cards underneath are gone, without depleting your match deck.

You’re given one Joker in case you get stuck, and powerups (called “Charms”) unlock as you beat more and more levels. Points are accrued as cards are removed, and the more cards you pull off at once, the higher your score. There’s a bonus for getting through the board without using your Joker, and further bonus points are granted for removing special scarab cards. Further, these cards release fast-moving gold scarab beetles, some of which when clicked on, grant you colored gems.

Aside from the inherent fun of gathering shiny things, these gems are important because they can be used to craft your own Charms. Each Charm—more time, bonus cards, an extra Joker—has its own gem recipe, and if you’ve got enough of the right sparklies, you can stockpile Charms for use in the more difficult levels. This is one of the best aspects of Pyramid Solitaire Saga since it allows good players to avoid having to purchase powerups with real-world money. 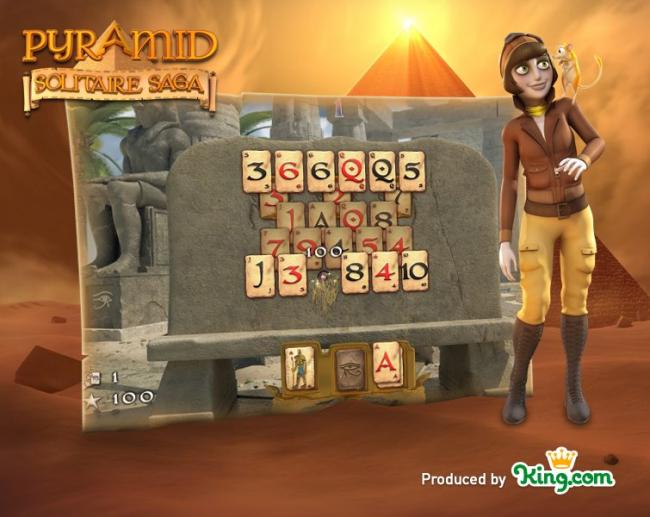 Related to this, rather than giving you a set amount of energy that once spent, ends your play session, you’re given five “lives.” And as long as you manage to keep clearing the boards, you get to keep playing. Depending on how good you are, this can actually eliminate the need to annoy your friends by pestering them for stuff.

The only downside to Pyramid Solitaire Saga is that unlike other solitaire games, there’s no way to take back a move. Many’s the time I’ve gotten on a roll and accidentally turned a card over just as I realized I needed it. It would have been great in those instances to be able to reel things back a card, but alas, you can’t. Regardless, the game exhibits a seemingly mystical power to keep a person (or at least me) utterly glued to the screen, and the main reason is that King.com has difficulty progression down pat.

Although the game starts easily enough, soon after things get a lot more challenging. And aside from different card formations, different objectives—such as hitting a certain score limit, creating a certain length card streak and clearing the board within a set time limit—keep things constantly changing. Mid-way through the game things get even more interesting when completing levels requires clearing the board more than once during multiple rounds.

While you can have a ton of fun with the game without spending a dime, those who want to can stack the deck by buying extra gems for around ten cents a piece. Charm recipes can also be bought in the in-game bazaar; the average Charm recipe costs around $10, but once you’ve bought it, it’s yours to keep.

Pyramid Solitaire Saga is yet another example of King.com’s knack for making entertaining, economical and surprisingly non-friend-alienating social games. It’s hard to say how many more sagas the company might have up its collective sleeve, but I can say that however many there are, I’ll definitely be there to play them.